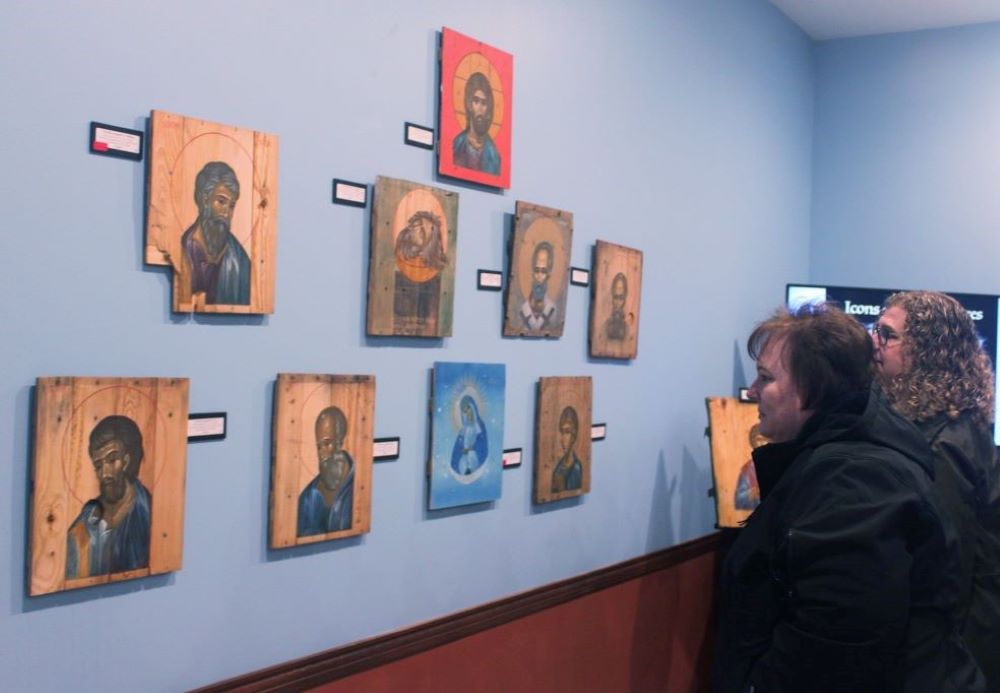 Attendees look at the "Icons on Ammo Boxes Exhibit," part of a fundraising event for Ukraine at Annunciation Byzantine Catholic Church in Homer Glen, Illinois, March 31. The event was sponsored by the parish, Rebuild Ukraine and CNEWA. (CNS/Laura Ieraci)

Three words in a text message from a friend in London alerted Paul Gavrilyuk that Russia's invasion of Ukraine had begun.

From his home in St. Paul, Minnesota, Gavrilyuk immediately called his brother in Lithuania, who agreed their elderly parents should evacuate Kyiv. It took about 200 phone calls between the two of them to convince their parents to flee.

It took their parents six days to drive through seven countries to Lithuania — a trip that in normal times would have taken an hour by plane — due to the mass evacuation from Ukraine.

Born in Kyiv, Gavrilyuk works as a professor at the University of St. Thomas in St. Paul, where he holds the Aquinas Chair in Theology and Philosophy. He said Russia's invasion of Ukraine spurred him into action.

"February 24th in my own life marks a point at which I had to set my scholarship aside, as much as I love the life of the mind, and really focus on one question, and that is, 'What could I do effectively to effect peace and fight the war by peaceful means?' "

He found an answer partnering with prominent business leaders and academics, as well as people with "extraordinary organizational abilities," to found the nonprofit organization Rebuild Ukraine.

And as a way to raise awareness and funds, Gavrilyuk turned to an iconography project with the mission to expose the ongoing tragedy of war in Ukraine and to raise funds for a voluntary mobile hospital.

The iconography project is the work of Oleksandr Klymenko and Sofia Atlantova, a husband-and-wife team of iconographers based in Kyiv. They have been painting icons on the lids of used ammunition boxes since 2014, when the war in Ukraine's Donbas region against Russian-backed separatists began.

Their sacred art pieces have come to be known as "Icons on Ammo Boxes" and have toured 13 countries, 45 cities and 90 locations to date. 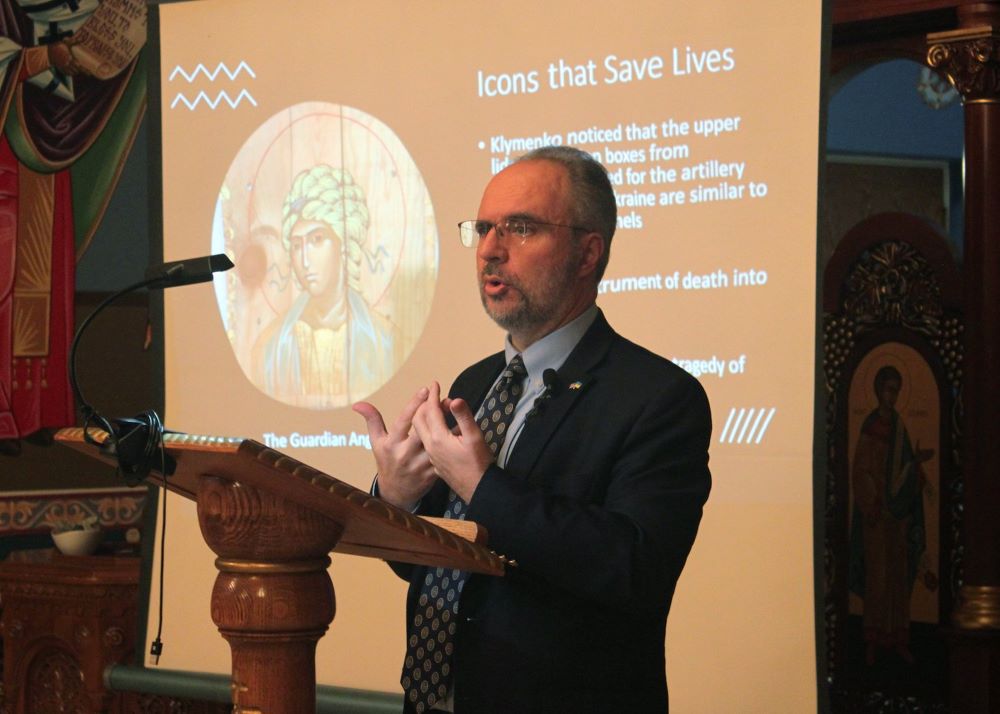 On March 31, Gavrilyuk brought the 91st exhibit of Icons on Ammo Boxes, co-sponsored by the Catholic Near East Welfare Association, to Annunciation Byzantine Catholic Church in the Chicago suburb of Homer Glen, Illinois.

During his presentation, Gavrilyuk explained how Klymenko was visiting the war-torn Donbas region, when he discovered that the wooden lid of an ammunition box looks like a wooden icon panel.

"And that's when the idea came to him that ... he could take an instrument of death and turn it into a symbol of light and transformation," said Gavrilyuk.

"What was also important for Oleksandr is that each icon also bears the scars of the war and, to that extent, it also bears witness," he said.

These "scars" include rusted hinges and nails, pockmarks and snapped off, jagged edges.

"Just as human beings, who are made in God's image and likeness, are being scarred and dehumanized by war, so do these icons, which are images of God and saints on wooden panels, bear the memory of the war," Gavrilyuk said.

While CNEWA's fundraising is focused on humanitarian aid to internally displaced people and refugees, Rebuild Ukraine has focused its greatest efforts on supplying tourniquets to Ukrainians on the frontlines. About 2,200 were sent to Ukraine in March.

"Essentially, I now measure my life and my time in tourniquets," Gavrilyuk said.

These devices are worn on each arm and applied to minimize intense bleeding from a wound sustained in battle. Their proper use can increase a wounded person's chance of survival by seven times. The organization also provides medical supplies and emergency vehicles to Pirogov First Volunteer Mobile Hospital and prescription drugs to civilians who have remained in Ukraine's embattled regions.

Gavrilyuk spoke of the vital work of the church in Ukraine as a "high-trust" and "strategically important" institution, highlighting the extended, reliable and well-organized aid network of the Catholic Church, through which CNEWA has sent more than $1 million in aid since the invasion began.

In addition to this network, individual parish churches of all denominations are providing Ukrainians food, water and shelter.

Gavrilyuk underlined the importance of the church's commitment to celebrate the liturgy and the sacraments — "despite the war and in the midst of the war" — and the "tremendous amount of spiritual care and support (and) therapy of the soul" it is providing.

Ukraine is home to the largest number of Eastern Catholics in the world — about 5 million — and Fr. Thomas J. Loya, pastor of Annunciation, pointed out the connection of his church with Ukraine, where the Ruthenian Church, called Byzantine Catholic in the United States, was founded.

Christians in Ukraine "are doing the same thing we're doing here," Loya said. "We're praying in very intense ways, we're seeking forgiveness and moving toward charity … but they're doing this in the midst of this hatred, this violence, this killing, this war."