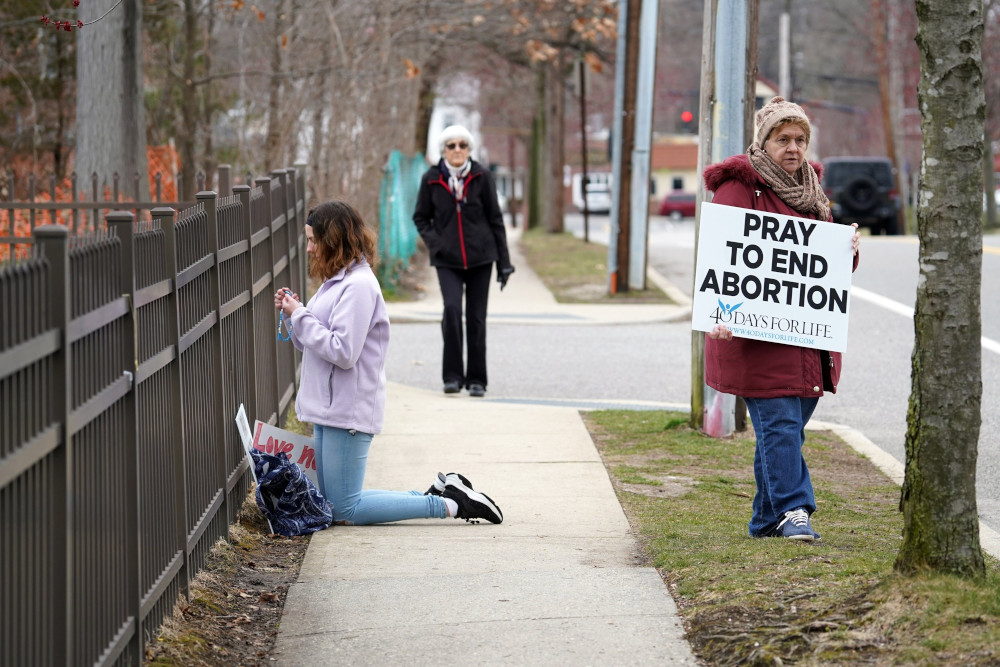 Pro-life advocates participate in a 40 Days for Life vigil near the entrance to a Planned Parenthood center in Smithtown, N.Y., March 19, 2020. (CNS photo/Gregory A. Shemitz)

The National Prayer Vigil for Life held each January will continue even with the Supreme Court's reversal of Roe v. Wadebecause there is "still a great need for prayer and advocacy"' to end abortion and protect the unborn and their mothers, the U.S. Conference of Catholic Bishops said Nov. 11.

But the Youth Rally and Mass for Life, traditional components of the March event for more than two decades, have been canceled, said the Archdiocese of Washington.

The archdiocese said a consultation process involving "dialogue with other dioceses, ministry leaders and the partners who assist in hosting the annual Rally and Mass" determined that the rally might conflict with current efforts to address abortion in states where it remains legal.

"We heard from many dioceses who shared that they are turning their efforts to their state’s March for Life now that Roe v. Wade has been overturned," said the statement. "We certainly support their local work and pray for their success."

The archdiocese encouraged groups traveling to the nation's capital to attend the march and Vigil for Life, which is scheduled for Jan. 19-20 at the Basilica of the National Shrine of the Immaculate Conception. The vigil has always coincided with the eve of the March for Life, which marks the date of 1973 decision of the court's Roe v. Wade ruling that legalized abortion nationwide. The 2023 March for Life is Jan. 20.

"The National Prayer Vigil is a time to praise God for the great gift of the recent Supreme Court Dobbs decision, overturning the tragic Roe v. Wade decision made almost a half-century ago," said Kat Talalas, assistant director of pro-life communications at the USCCB.

"State and federal legislators are now free to embrace policies that protect preborn children and their mothers," she said in a statement. "Yet, there is still a great need for prayer and advocacy from the faithful, as there will be intensified efforts to codify Roe in legislation and policies at the state and federal levels."

She added that "many prayers and sacrifices are needed to transform our culture so that all may cherish the gift of human life and offer life-giving support to vulnerable women, children, and families."

The opening Mass for the vigil will take place at 5 p.m. (EST) Jan. 19 with Archbishop William Lori of Baltimore as the principal celebrant and homilist.

The Mass will be immediately followed by a Holy Hour for life. This will start off a series of nationwide holy hours throughout the night from dioceses across the country, which will be broadcast on the USCCB's website, www.usccb.org.

The nationwide vigil concludes at 8 a.m. (EST) Jan. 20 with a closing Mass to be celebrated by Auxiliary Bishop Joseph Coffey of the U.S. Archdiocese for the Military Services.

A live television broadcast of the vigil will be provided by the Eternal Word Television Network and will be available via livestream on the national shrine's website, https://www.nationalshrine.org/mass.

The USCCB pro-life secretariat also is encouraging Catholics across the country to observe a nationwide prayer vigil from Jan. 14 to Jan. 20 to pray for an end to abortion and "a greater respect for all human life."