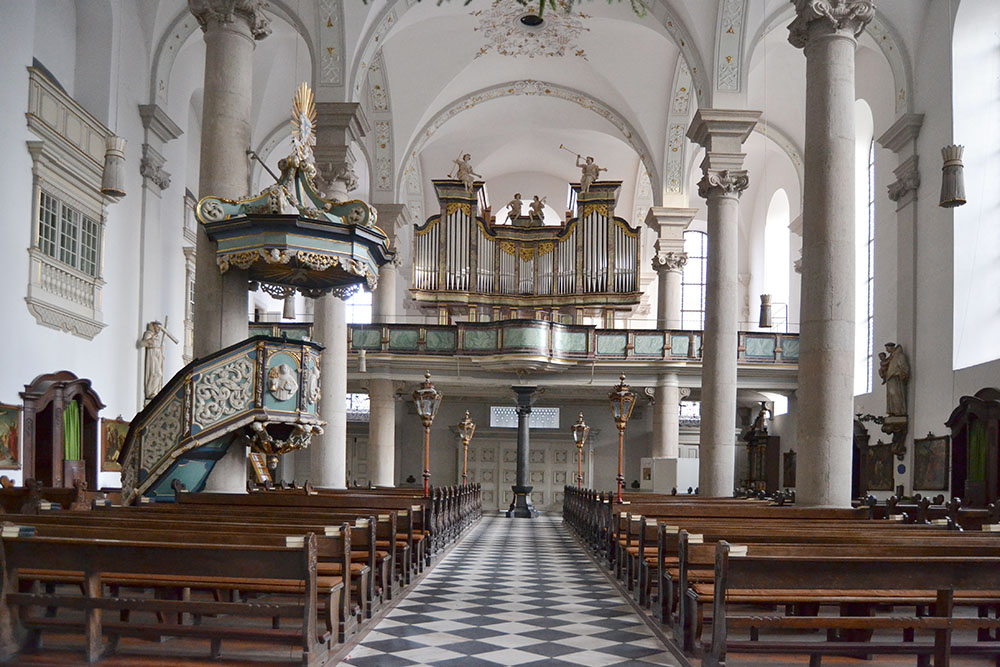 Interior of the Church of St. Maximilian in Düsseldorf, Germany (Wikimedia Commons/Maxplatz)

The effort is intended to be highly symbolic.

Ulrike Göken-Huismann, a 59-year-old theologian and president of the Catholic Women's Association of Germany (KFD), preached at Mass last Monday in the Church of St. Maximilian in Düsseldorf in western Germany.

In fact, she has regularly given homilies at Services of the Word since 1988, which is normal practice throughout the country.

But this was different. For the second year in a row, she was one of twelve women in twelve different locations who took part in this May 17 nationwide action called "Preachers' Day".

"Our goal is to make it clear that women can preach and can do it well," says Göken-Huismann, who has two children.

"The Church is missing out on a lot by not allowing us to do it. In fact, it's a missed opportunity! There is a wealth of talent among women that needs to be tapped into," she insists.

'The apostles were not all men'

The Catholic Women's Association of Germany is one of two women's federations in the country. They chose May 17 for their initiative because of Junia, a female saint honored on this day by the Orthodox Church.

St. Paul mentions Junia in the Letter to the Romans.

"Junia was definitely a female apostle who was mistaken for a man for a long time," Göken-Huismann points out.

"Fortunately, thanks to new translations, it has become clear that she was a woman. With our event — 12 Women, 12 Places, 12 Homilies — we want to show that not all apostles were men," the theologian adds.

Through this concerted action, which other women across Germany have spontaneously joined, the organizers hope to achieve progress in the synodal journey that was launched a year and a half ago.

She is sure that "Rome cannot oppose it".

Göken-Huismann is convinced that women will be able to become priests one day, but she knows that "the road will be long".

"We're taking it one step at a time," she says.

'It's a question of what we have the right to do'

Surprisingly, the German bishops once again put up no official opposition to the May 17 initiative.

However, as Clara Steinbrecher of the conservative Maria 1.0 movement recently said, "the Catholic Church is not a framework in which everyone can wish for what they want".

The timing of this action comes week after another initiative criticizing Rome: the May 11 blessing of homosexual couples by a hundred priests.

"How can we explain that women don't have equal rights in the Catholic Church when they do in society?" she asks.

"These various actions reflect a growing dissatisfaction on the part of the faithful," says Michael Seewald who teaches theology at the University of Münster.

"These protest movements are supported by a majority of the country's Catholics. The opponents have very good contacts with Rome and are making their voices heard, but they are a small group," he notes.

But can these 12 women preachers succeed in bringing about change?

"It would be possible to find solutions at the regional level and to leave room for maneuvering on the ground for these issues," he believes.

"But I don't know if Rome is ready for that. Rome is looking at the German synodal path very skeptically and has sent negative messages on the four topics of discussion there. It is difficult to be very optimistic," Seewald admits.

But women preachers like Ulrike Göken-Huismann remain hopeful and optimistic. Their new slogan is, "Stay in the Church! Demand change!"