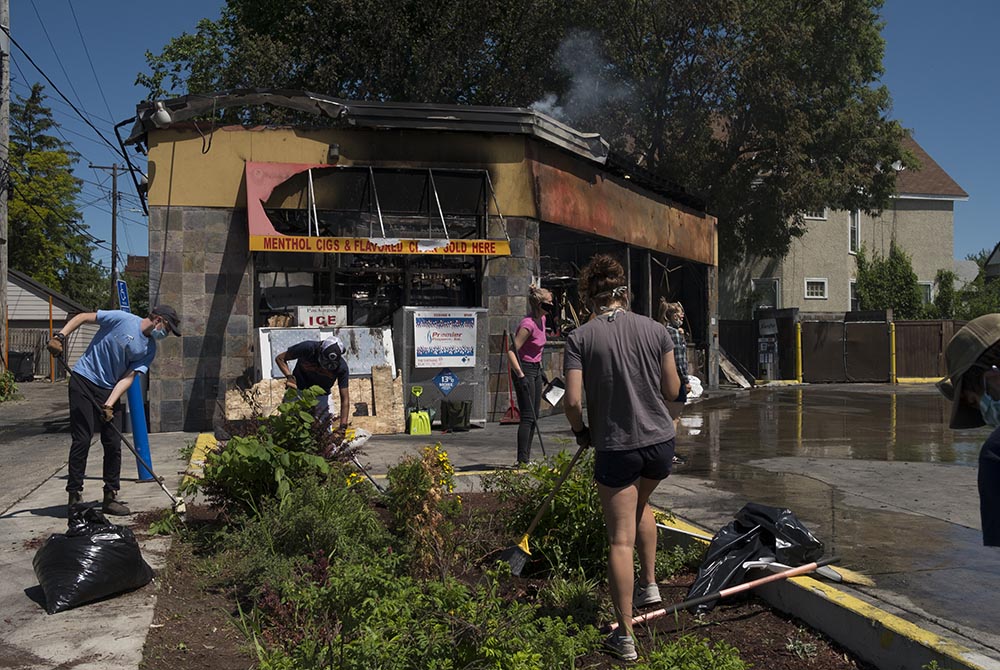 Volunteers clean up fire damage to a gas station on Lake Street May 30 in Minneapolis, Minnesota, following another night of protesting and vandalism. Hundreds of volunteers showed up around East Lake Street to clean up following riots the night before. (Newscom/Polaris/Brooklynn Kascel)

Something is happening in the Twin Cities.

Individuals are taking it upon themselves to clean their city's streets after nights of looting.

Others are handing out free food to neighbors while grocery stores are closed because of riots.

And volunteers, without the structure of any formal organization, are working to transition more than 200 people to a hotel-turned-homeless shelter, getting them off the street and away from violence.

Despite national attention to riots and looting, they see a community coming together in solidarity, demanding justice and addressing vital needs however they can.

"I think there's just a lot of autonomous solidarity and mutual aid stuff that's happening, and it's not always under the auspices of a formal organization," said Joe Kruse, "which is in my opinion super exciting." Kruse, 31, is a member of the Minneapolis Catholic Worker community. 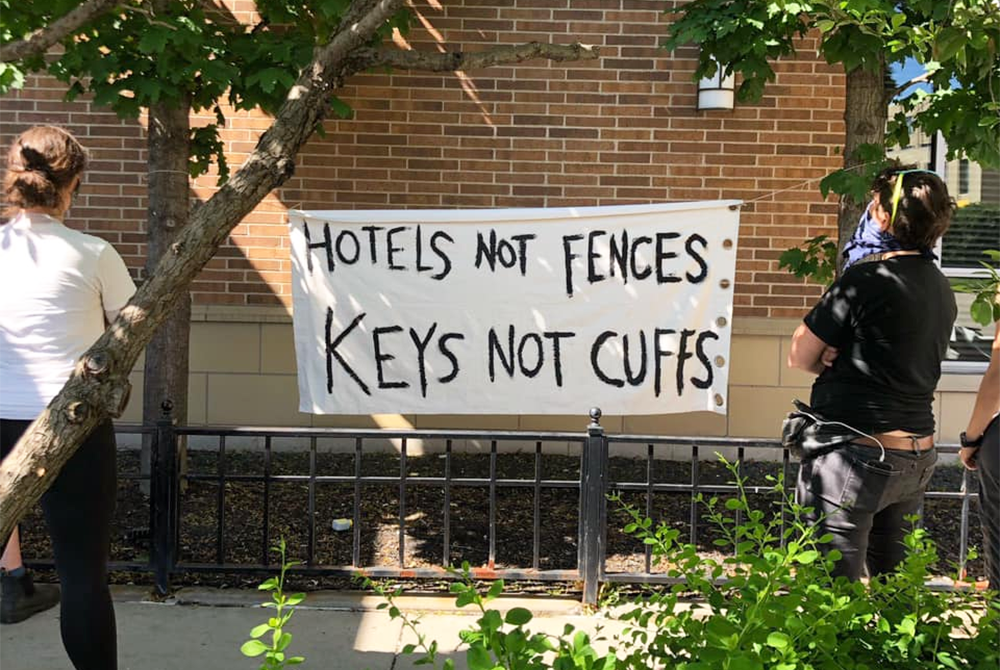 A sign hangs outside the former Sheraton at Chicago Avenue and Lake Street in Minneapolis, in support of the hotel-turned-shelter. (Courtesy of Zachary Johnson)

One of the most ambitious community projects in Minneapolis at the moment sits on the corner of Chicago Avenue and East Lake Street, pretty much at the epicenter of the past week's violence, inside what used to be a Sheraton hotel. There, hundreds of volunteers, under the direction of no official organization, have been working quickly to turn the building into a fully functioning homeless shelter, capable of caring for more than 200 people. 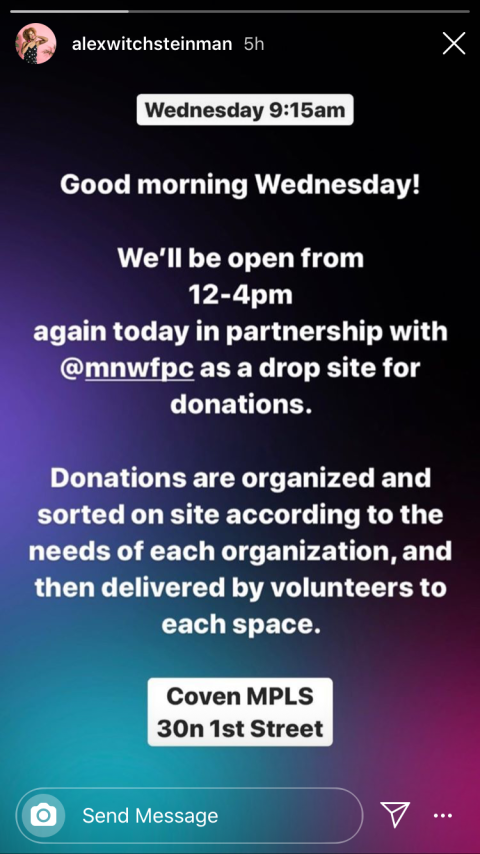 Screengrab of an Instagram story post by Alex West Steinman, co-founder and CEO of the Coven, a community and co-working space for women, nonbinary and trans people. West Steinman has been using her platform recently to coordinate donation drives. (NCR photo)

Zachary Johnson, 31, executive director of the nonprofit Call to Action, has been instrumental in this effort. For months, Johnson has been working with dozens of other volunteers from around the area to protect a homeless tent encampment from being brutalized by police officers attempting to limit its size.

On Saturday, May 30, Johnson went to the Sheraton in downtown Minneapolis, where volunteers had arranged for some of the encampment's more at-risk residents to shelter in a safe space. When Johnson and others arrived, they learned that the hotel was in the process of closing for good in the next few hours and all guests had been asked to leave, he said.

The Minnesota National Guard was already on its way to the city, having been deployed by Gov. Tim Walz earlier that morning, and the volunteers expected violence to escalate once again that night. When things turned bad, the homeless would be some of the most vulnerable.

"We saw a window where we could take a really big swing," Johnson told NCR.

In a matter of two hours, Johnson and other volunteers were able to negotiate with the hotel's owner to turn the building into a harm reduction style homeless shelter. Initially, the group planned to host 20 people that first night. By morning, they ended up with 150.

"There was a community who was prepared to take the risk – a big risk," said Johnson. "And I think that's sort of the [overall] sense: Now is the time to take a risk if you're going to do it."

The shelter, which doesn't even have a name yet, is currently being run completely by volunteers. Over the past five days, Johnson said he has worked with hundreds of people to get the place up and running.

"It's a new way of doing it rather than just waiting and begging and hoping. Take the initiative. Make it happen once you have the power," he said. "And, you know, we have enough people where we've got power."

As much as she'd like to, Koneck has not been able to join the thousands of demonstrators at protests demanding justice for George Floyd. Instead she's stayed home, caring for her toddler and not wanting to expose her parents to the coronavirus. But even from there, she has been able to stay in the loop of things, thanks in large part to some prominent local activists and the social media accounts they run.

Koneck described to NCR an impressive social media network "ecosystem" in the region. Certain individuals, many of whom are women of color, have been serving as information hubs by using their personal Instagram and Twitter accounts to alert the wider community of specific needs — of activists or residents — and call for donations. 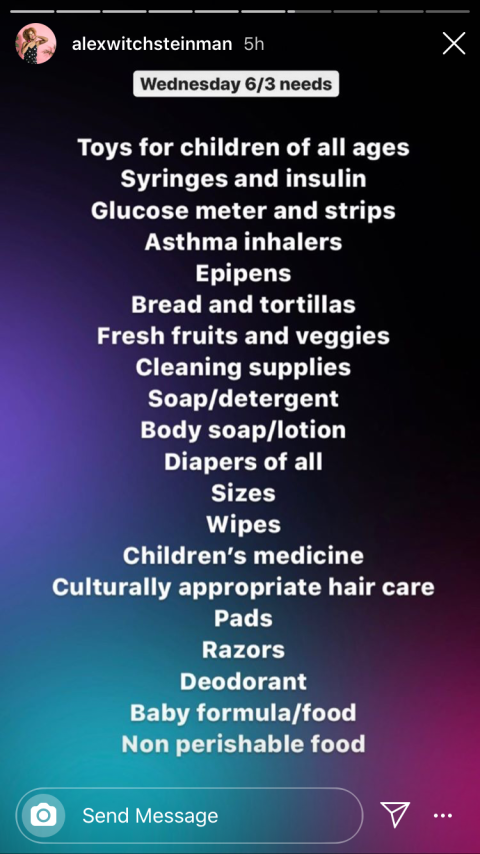 Screenshot of Instagram story post by Alex West Steinman, who has been using her platform recently to coordinate donation drives (NCR photo)

According to Koneck, the idea is to funnel goods from the suburbs, where items are still in-stock, into the cities, where they are unavailable. Sometimes donations arrive so quickly, Koneck said, that activists will update posts within a few hours asking people to hold off bringing anymore items.

"It's just people showing up because they care about this community," Koneck said.

Many social justice organizations have also leveraged the moment and organized some hugely successful donation campaigns to support their work on the front lines. In just four days, the Lake Street Council was able to raise over $2.5 million to help rebuild small businesses affected by last week's riots, according to the Star Tribune. And the Minnesota Freedom Fund, an organization that pays bail for low-income individuals, eventually began asking donors to send their money elsewhere after a national Instagram campaign brought in $20 million.

Kruse said by his estimate, the overwhelming energy in the city is "grounded in solidarity."

"One of the defining aspects of this moment is seeing the ways in which people are coming together," Kruse said.

Kruse saw that solidarity on full display last Saturday, May 30, when he left his home with wife and infant son to walk to a nearby protest in South Minneapolis. As soon as they left their block, Kruse said he saw people with brooms and dustpans sweeping up the sidewalk and street, cleaning up glass and trash left from looters the night before. The further they walked, the more people they saw doing the same thing, he said.

"We had no idea. There wasn't a Facebook event for it. It was just a huge amount of people cleaning," Kruse said.

When his family arrived at the protest, Kruse estimated there were more than a thousand people there. When that group marched to the site of Floyd's death, another huge group was already there. And then, standing at that site and listening to speakers, Kruse noticed another group, marching directly to join them.

"The amount of people that we saw active and engaged and out in the city was by far the largest amount of people I've ever seen at any sort of action or protest or rally," Kruse said. "It was honestly like there was a protest and rally happening in the entire area."

In the days since then, Kruse has noticed some other moving things while walking around his South Minneapolis neighborhood: regular people setting up tables, handing out free food.

According to the Star Tribune, closures and damages to grocery stores have turned nine Minneapolis neighborhoods into food deserts in the past week. In response, community members, most of whom are people of color, have been giving away cooked food and perishables. Kruse is aware of at least one organization — the Democratic Socialists of America — distributing food, but he said he thinks most of the groups are just people responding to a need they see in their community.

Koneck, the mother in St. Paul, saw a tweet over the weekend that she says has lingered with her all week. It was part of a thread by a man heading to a protest on May 30, and detailed the numerous acts of kindness he'd been on the receiving end of that night. Fellow activists offered words of encouragement; neighbors offered to pay his bail if necessary.

"I guess my point is that underneath this thing we live in that is not a society, there is a society, waiting," the tweet wrote.

Riots and looting are part of the Twin Cities' reality at the moment. Koneck doesn't deny that. But violence, she says, is not the whole story.

"We're not trying to destroy [our community]. We're trying to redeem it from all the things that have gone wrong."