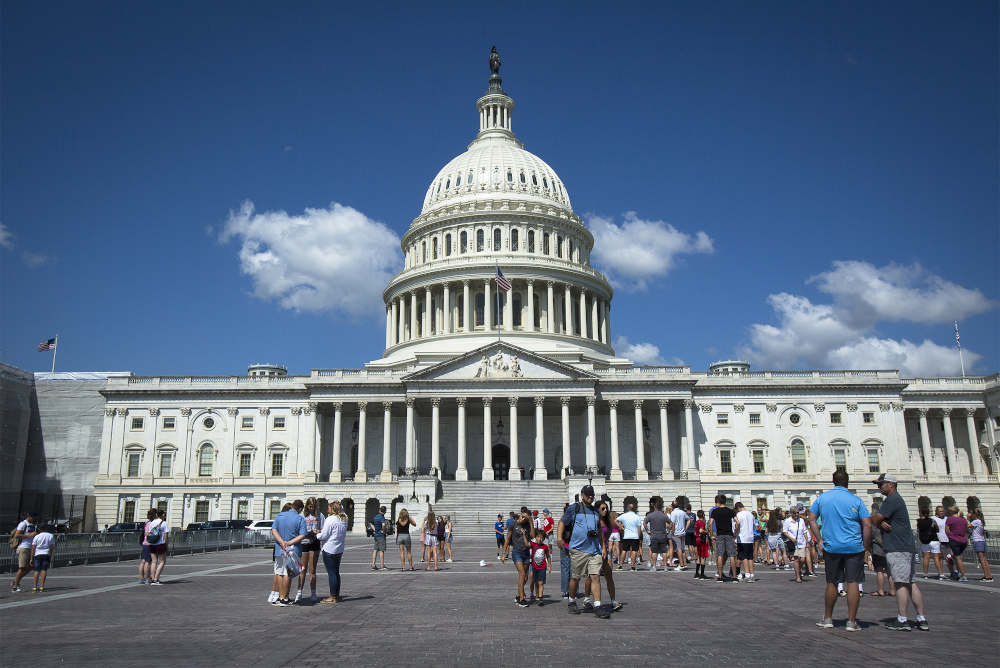 The U.S. Capitol is seen in Washington July 24. (CNS/Tyler Orsburn)

Congress was busy in 2019, but the House and Senate were often at cross purposes with each other.

The Republican-led Senate spent much of its time voting on seating federal judicial nominees. By early December, 170 of them had been approved since Donald Trump became president in January 2017.

The Democratic-led House — the first time Democrats have held the lower chamber since 2010 — passed more than 400 bills, the vast majority of which lay untouched in the Senate. There also is the matter of impeachment, which two House committees have been focused on for a good part of the fall, although the Senate is likely to get its turn in early 2020.

"There really is no legislation that has passed the Congress," agreed Patrick Carolan, the outgoing executive director of the Franciscan Action Network, one of several Catholic advocacy groups working to achieve legislative successes in line with the tenets of the faith.

"Even the trade agreement hasn't gotten to the Senate yet," added Carolan, referring to the U.S. Mexico Canada Agreement, designed to succeed the North American Free Trade Act. The White House and House Democrats reached a deal on its contents, but the Senate must weigh in on ratifying it.

The U.S. Conference of Catholic Bishops applied Catholic teaching to a number of bills circulating in one or both chambers, although the slowdown affected the U.S. bishops' priorities as well.

One success, notable for its rarity, was the passage of disaster assistance legislation that included $600 million for nutrition assistance in Puerto Rico, still reeling from 2017's Hurricane Maria.

Another success was Trump's signing of a budget agreement that lifted the debt limit for two years and avoided $126 billion in automatic spending cuts. Negotiations between both parties for appropriations bills for the federal agencies involved have been slow in coming, though, setting off further rounds of stopgap measures to keep the federal government open. The latest stopgap measure was agreed to late Dec. 12 to keep the government from shutting down again Dec. 20. The last shutdown — the longest yet in federal government history, started in late December 2018 and lasted 34 days.

The U.S. bishops' conference had urged the U.S. Department of Agriculture to scrap a proposed rule stripping Supplemental Nutrition Assistance Program benefits from able-bodied adults without dependents. But the rule took effect in early December.

The bishops also weighed in against a proposed Department of Housing and Urban Development rule that would evict "mixed" families — households in which at least one member is living in the United States illegally — from public housing. The rule, which has not yet been put in place, would cost the federal government billions of dollars to evict the 25,000 households, which contain an estimated 50,000 children.

The U.S. bishops' conference opposed the Equality Act over concerns that allowing new terms in federal civil rights statutes to explicitly include sexual orientation and gender identity would be injurious to the religious liberty protections afforded to charities and faith-based organizations under the Religious Freedom Restoration Act. The House passed the bill, but the Senate is sitting on it.

The bishops advocated the reauthorization of the Violence Against Women Act, which passed the House but has seen no action in the Senate.

The bishops also backed the Born-Alive Abortion Survivors Protection Act, introduced in the House. It would accord babies who survive abortion the same medical attention any newborn would receive. A majority of House Republicans support the measure, and through the year they pushed, unsuccessfully, for their Democratic counterparts to agree on a discharge petition that would force a vote on the bill by the full House.

The U.S. bishops' conference joined with the Catholic Health Association in urging passage of the Palliative Care and Hospice Education and Training Act, which passed the House but is likewise in the Senate limbo.

A coalition of religious organizations, including the U.S. bishops' conference, urged full funding for the 2020 census. The White House's 2020 budget proposal added $5.3 billion to the U.S. Census Bureau's budget. House Democrats, saying that was not enough, passed a spending package that called for a $7.5 billion budget hike. That bill, too, awaits action in the Senate.

The House Ways and Means Committee approved the Economic Mobility Act, which included a repeal of the so-called "parking lot tax" the U.S. bishops had sought to eliminate from the Unrelated Business Income Tax section of the Internal Revenue Service's tax code, which affects federally recognized nonprofit organizations, churches included. The full House has yet to vote on the bill.

The Ways and Means Committee has yet to act on the Charitable Giving Tax Deduction Act, supported by the U.S. bishops, that would create and "above-the-line" charitable giving tax deduction to offset the anticipated drop in charitable giving following the expansion of the standard deduction.

Similarly, neither the House nor the Senate have taken action on two energy-related bills backed by the U.S. bishops: The Energy Innovation and Carbon Dividend Act and the Nonprofit Energy Efficiency Act, the latter of which promotes energy efficiency for nonprofit organizations, including houses of worship.

"There's a high level of partisanship right now," said Julie Bodnar, a domestic policy adviser in the U.S. bishops' conference Office of Domestic Social Development. Many elected officials, she added, are "putting political posturing ahead of the common good."

On the other hand, she said, "I'm not surprised. After the (2018) elections we could see this happening," with divided government not working well with each other.

The Franciscan Action Network's Carolan pointed to several bills passed by the House getting no traction in the Senate.

One bill expands access to the ballot box and dents the influence of "big money," Carolan said, while a second bill would set in place a series of federal election reforms. Another bill protects Americans with existing medical conditions from being denied coverage by their new insurance company. One House-passed bill increases the minimum wage.

Another bill Carolan touted closes a loophole on firearm background checks. "It's sometimes called the Charleston bill because it's a reaction to what happened in Charleston," South Carolina, in 2015, when Dylann Roof murdered nine members of a black congregation in the city during a Bible study. "If the federal government doesn't complete a background check in three days, they can go ahead and complete the sale," he added.

Carolan also cited legislation on immigration, climate change, gun safety and "democracy issues" passed by the House. "Some are bipartisan, but not all are bipartisan," he said. "My guess is that they would each pass the Senate if they actually came up for a vote."

The CHA registered a key win in the signing of the Empowering Beneficiaries, Ensuring Access and Strengthening Accountability Act, which, according to a Dec. 13 email from CHA senior director for public policy Kathleen A. Curran, "extends several important Medicaid programs that allow vulnerable, low-income older adults and people with disabilities to live with dignity in the care settings of their choice and provide access to comprehensive care and treatment for individuals with the most complex mental illnesses and addictions."

Curran added, "We're also working to reduce Medicaid cuts to safety-net hospitals that were included in the ACA (Affordable Care Act) when it was assumed that all 50 states would expand their Medicaid programs."