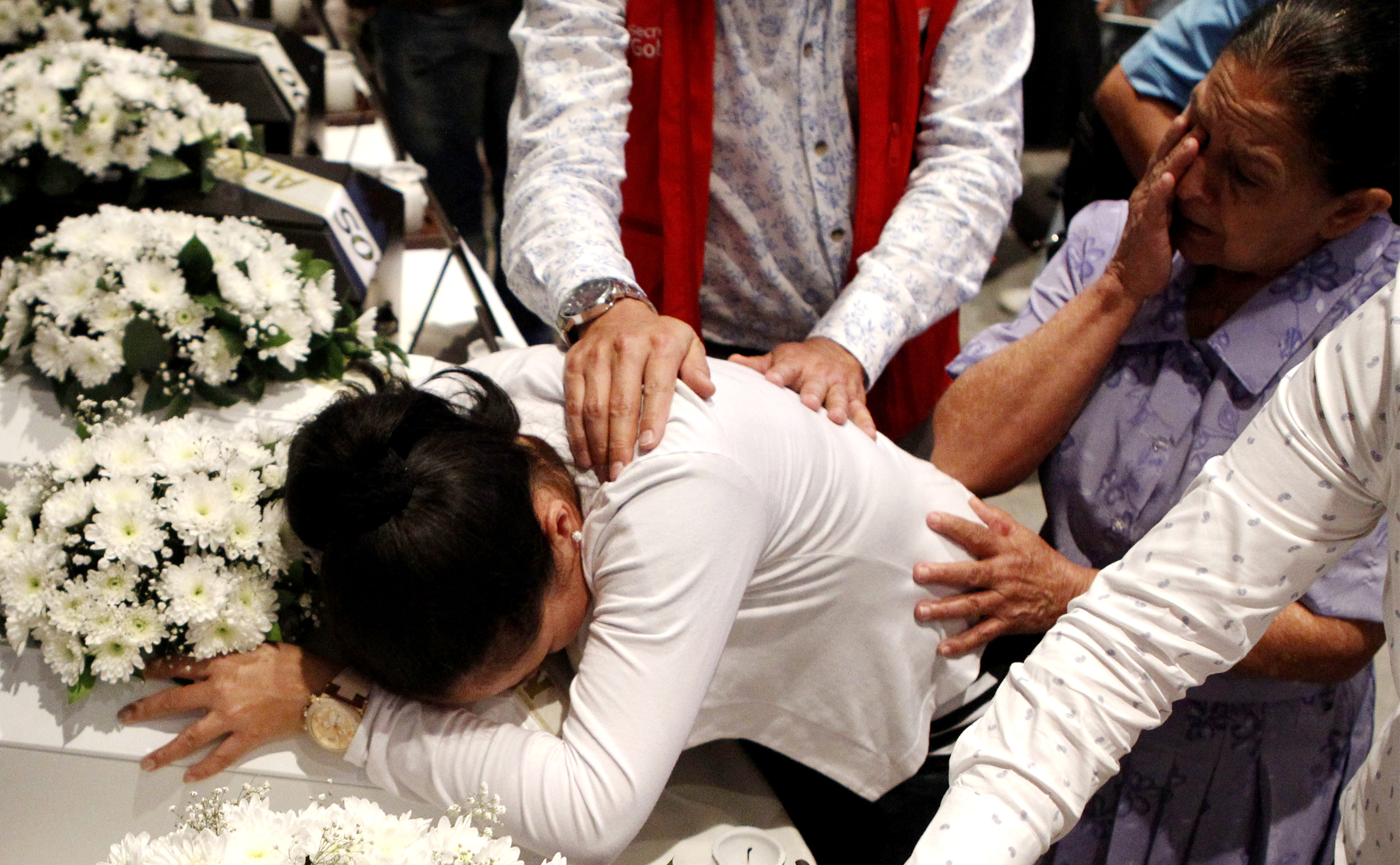 A woman mourns on a coffin during a ceremony to deliver the remains of victims of the conflict with paramilitary groups in Medellin, Colombia, Aug. 18, 2017. (CNS/Luis Eduardo Noriega A., EPA)

In the complex peace process now underway in Colombia after 52 years of violent conflict, the Catholic Church works on many levels to replace a culture of violence with one of encounter.

Hopeful speakers at a Feb. 2 United Nations forum described the incremental steps taken by former combatants and their civil society counterparts to seek reconciliation and a lasting peace.

Colombian Archbishop Luis Castro Quiroga of Tunja, former president of the Colombian bishops' conference, said one of the church's roles is "helping people step away from vengeance and toward forgiveness and reconciliation."

The first steps are the most difficult for people who have lived with violence for decades and those who take them must be enthusiastic until others can begin to feel the peace, he said.

After 52 years of armed conflict in Colombia, government and rebel leaders reached a peace accord in late 2016 that put an official end to a war that claimed more than 200,000 lives and displaced almost 7 million people.

The church is important to the process because it is impartial, knows the details of the conflict, can maintain dialogue and has an historic presence throughout the country, speakers said. Pope Francis' visit to Colombia Sept. 6-11, 2017, underscored the church's commitment to peace and its focus on the victims of the conflict.

Archbishop Bernardito Auza, the Vatican's permanent observer to the United Nations, summarized the pope's five-point exhortation on moral courage, forgiveness, reconciliation, truth and justice. He said the pope's most important admonition was to "avoid the temptation to vengeance and offer forgiveness for past wrongs."

Msgr. Hector Fabio Henao, director of Caritas Colombia, is president of the National Council for Peace, Reconciliation and Coexistence. The new group includes 105 representatives of government and civil society and is a venue for permanent dialogue to make the peace process diverse, inclusive and sustainable, he said.

Ambassador Maria Emma Mejia Velez, Colombia's permanent representative to the United Nations, said the establishment of a Special Jurisdiction for Peace is one of the most significant elements of the peace process. It is a transitional court to review the most serious crimes committed during the war, deliver judgment and impose penalties.

Castro said transitional justice helps facilitate the move from war to peace, but does not mean impunity. "It's an opportunity to use justice so there is a process that allows for peace," he said. People who admit their criminal responsibility may be treated more leniently than those who deny it and are found guilty.

David Cortright is director of the Peace Accords Matrix at the Kroc Institute for International Peace Studies at the University of Notre Dame. He said the Colombian peace agreement has more than 300 pages and 570 specific stipulations and is more complex than any other in the institute's extensive collection of peace accords.

Cortright said the implementation of the Colombian peace accord is on or ahead of the pace of other fruitful agreements, has brought an end to the armed conflict and secured the most successful disarmament of any accord he has studied.

He cautioned that "peace is more difficult than war and requires a sustained process," which typically takes at least 10 years before it can be evaluated.

The biggest current problem with implementation is the lack of security guarantees in the territories that were most affected by the war. "This is a grave threat to the overall peace process and takes away confidence that former combatants can return home," he said.

Citizen participation is a key factor in the long-term success of the peace process and must be encouraged by the government, Cortright said. Participation by citizens in civil programs and economic development will enhance democracy, especially in territories beyond the major urban centers, he said.

In addition to its religious leadership and social presence, the Catholic Church in Colombia participates in the peace dialogue, provides encouragement for participation of all parties and monitors the cease-fire.

Auza said many successful steps have been taken on the long journey to peace, but there are significant obstacles in the path.

Speakers said the peace is challenged by outbreaks of violence, pressure on participants from groups that lost economic influence when the war ended, and the lack of progress on divisive land ownership issues. Nonetheless, widespread demobilization of more than 11 million armed combatants made 2017 the least violent in modern Colombian history and people move freely without fear of being shot, kidnapped or extorted, they said.

The theme of the side event was "Reconciliation and Peace in Colombia: Confidence-Building Developments and Continuing Challenges." It was co-sponsored by the Holy See's permanent observer mission to the United Nations, the Colombia's permanent U.N. mission, Caritas Internationalis, the Catholic Peacebuilding Network and the Kroc Institute for International Peace Studies.