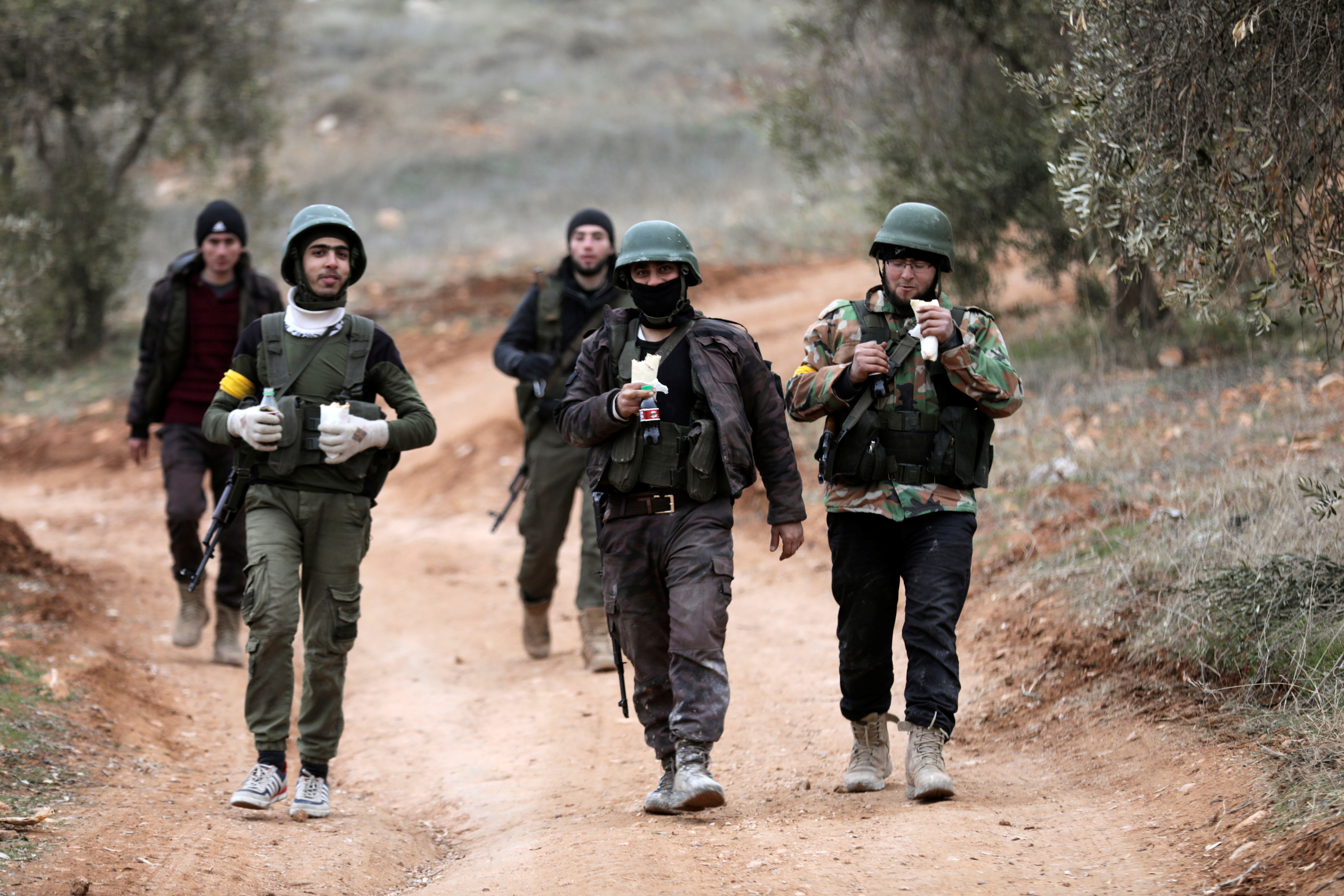 Turkish-backed Free Syrian Army fighters are seen Jan. 22 near Afrin, Syria. Churches in Afrin are calling on the world to stop the slaughter of civilians during the Turkish military assault. (CNS/Khalil Ashawi, Reuters)

Churches in Afrin, Syria, are calling on the world to stop the slaughter of civilians during the Turkish military assault.

"We ask you to pray for us and for our city which, before a couple of days ago, was full of life, but today is not," said the Rev. Saeed Daoud, a Syrian clergyman whose name has been changed at his request due to fear of retribution.

"The brutal attack of the Turkish military with extremist Islamic groups has been carried out, without any warning," he told Catholic News Service in an email, referring to Turkey's relentless shelling and ground offensive since Jan. 20.

In an appeal for international help, another religious leader wrote: "We are asking for intervention and protection against the violent attacks which are being levied against us at this moment.

"Many lives are in mortal danger," said the Rev. Hakim Ismael. "We are unable to protect ourselves or our families against these attacks, neither are we able to offer assistance or shelter to the innocents. Please help us."

The city of Afrin, located in a Kurdish-controlled area of northwestern Syria, is approximately 30 miles from Aleppo.

Father Emanuel Youkhana, an archimandrite of the Assyrian Church of the East, told CNS: "With the military defeat of ISIS in Iraq and the final phase of its defeat in Syria, we prayed and hoped to move forward in a new phase of reconciliation and rebuilding the life toward a future where all people -- Christians, Muslims, Yezidis, Kurds, Arab, Assyrians and all -- may live in dignity and justice.

"We are shocked by another brutal and violent attack on the people in Afrin. Here again, the innocent civilians are paying the price for political interests under the pretext of fighting against the terrorist," said Youkhana, who runs Christian Aid Program Northern Iraq, a Christian program for displaced Iraqis around the city of Dahuk.

"Attacking who fought ISIS is shocking and questionable action," he said. "We pray for decision makers to work for peace. Battle cannot be a path to peace."

Dutch human rights advocate Johannes de Jong told CNS: "The civilian population of Afrin is deliberately targeted and being killed off. This is also a specific threat to the Christian church in Afrin.

"The jihadist proxies used by Turkey to invade Afrin have themselves said that there is no room for Christians there," added de Jong, who closely monitors events in Syria's North.

"Will the Trump administration allow Afrin's civilian population to be indiscriminately killed by the Turkish air force and permit jihadist proxies to invade Afrin and kill any Christian they can find?" he asked.

De Jong directs Sallux, formerly the Christian Political Foundation for Europe, based in The Netherlands. For the past several years, he has worked with minorities in Syria and Iraq, including Syriac Christians, Yezidis, Turkmen and Kurds.

The Kurdish-run city of Afrin has only four hospitals, now packed with "injured people and wounded innocent children," Daoud said, adding that there are several reported cases of women who miscarried "due to shock and fear."

Robar Refugee Camp, housing 600 displaced Syrians from the Aleppo countryside, was bombed with many injuries. Camp residents have appealed to the United Nations to intervene to stop the shelling.

In another instance, 11 members of the same family were killed when they tried to escape the bombardment by sheltering in a nearby village.

Turkish war planes began shelling Kurdish positions in Afrin shortly after Turkish President Recep Tayyip Erdogan announced the launch of the military operation named Olive Branch. Erdogan has branded the mainly Kurdish YPG militia in the area a terrorist group; however, much of the bombing appears to be hitting civilian areas.

The YPG denies any direct links with the Turkish Kurdistan Workers' Party and is a crucial part of a U.S.-backed alliance effectively battling Islamic State and other jihadists in northern Syria.

"That's Turkey's excuse for these raids, but in fact they (YPG) are not terrorists," Lauren Homer, Washington, D.C.-based international human rights lawyer, told CNS of Erdogan's claims. "To the extent they have fired weapons at the Turks, it's in response to constant Turkish shelling of this and other areas along the Turkey-Syria border. It is a humanitarian catastrophe."

"The bombing is quite indiscriminate. The church there is calling for a no-fly zone," she said.

Erdogan is scheduled to meet Pope Francis at the Vatican Feb. 5.