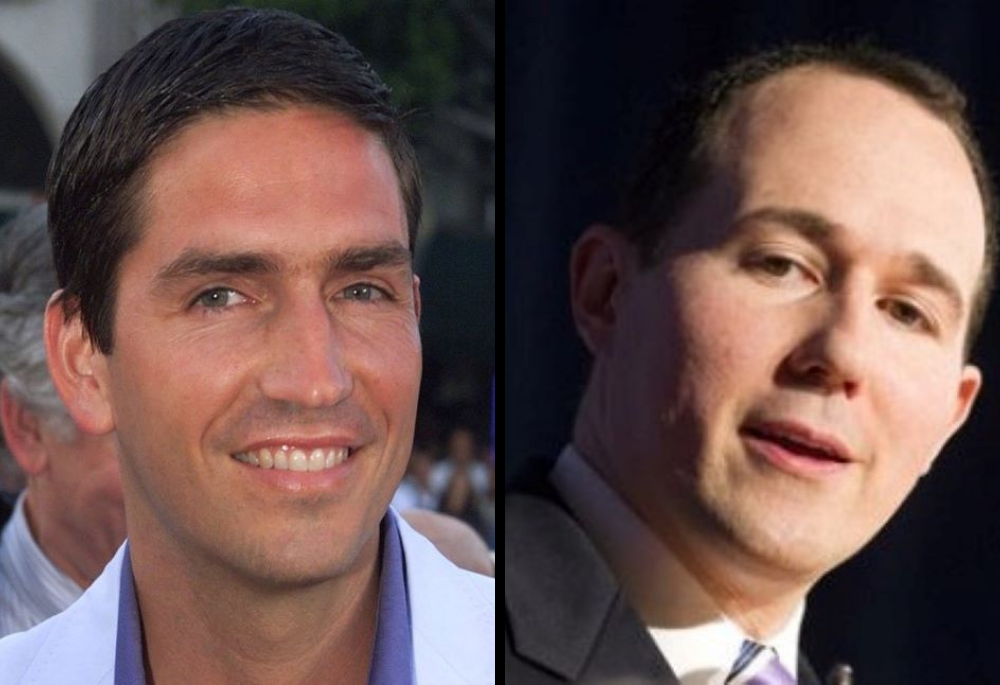 Jim Caviezel, left, appears in a 2003 file photo for the film "The Passion of the Christ." Raymond Arroyo, EWTN anchor and frequent Fox News contributor, appears in a 2013 file photo taken at the National Religious Freedom Conference in Washington. Caviezel and Arroyo are headline speakers at the April 2 Cincinnati Men's Conference. (CNS/Reuters, CNS/Nancy Phelan Wiechec)

A Kentucky bishop has withdrawn from the speaker lineup of a Catholic men's conference in Cincinnati that the local archdiocese is not sponsoring or participating in because of the "significant baggage" of its featured speakers, which include EWTN anchor Raymond Arroyo and "Passion of the Christ" actor Jim Caviezel.

The Cincinnati Men's Conference, scheduled for April 2 at the University of Cincinnati Campus' Fifth Third Arena, advertises Arroyo, a frequent Fox News contributor, and Caviezel, who recently spoke at a QAnon conference in Las Vegas, as its "headline speakers."

Bishop John Iffert of Covington, Kentucky, had also originally been advertised as a featured speaker, but his name no longer appears on the conference's website. A spokeswoman for the Diocese of Covington told NCR that Iffert withdrew as a speaker. 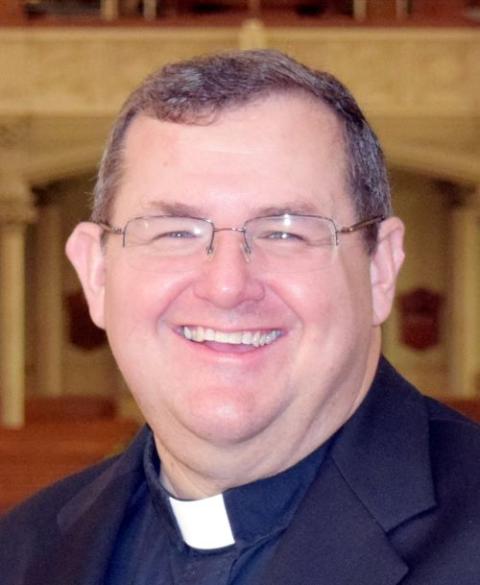 Bishop John C. Iffert, ordained a priest for the Belleville, Illinois, diocese in 1997, was ordained and installed as the bishop of Covington, Kentucky, Sept. 30, 2021. He will not participate as a speaker at the Cincinnati Men's Conference. (CNS photo/Chris Orlet, The Messenger)

University of Cincinnati football coach Luke Fickell is listed as an "invited speaker" for the conference.

The Archdiocese of Cincinnati declined a request for an interview. A spokeswoman for the archdiocese told NCR in an email that there would be "no public statement at this time concerning this matter."

On Jan. 3, the Archdiocese of Cincinnati emailed local clergy to inform them that the archdiocese would "not be sponsoring, promoting or participating" in this year's conference because of its opposition "to attempts by either the right or the left to divide the Catholic Church by political position."

The email — the text of which was obtained by NCR and confirmed by two knowledgeable sources in the archdiocese — said the event's primary speakers carry "significant baggage" that the Archdiocese of Cincinnati "could not ignore."

"We voiced concerns to the Cincinnati Men's Conference organizers, who operate entirely independently from the archdiocese, that this year's primary speakers, regardless of their otherwise outstanding characteristics, have publicly aligned themselves with divisive political positions and have used even their Catholic platforms to promote those positions," the archdiocese said in the email.

The email also reported that the conference organizers sought to assure the archdiocese that the talks would be "spiritual, rather than political, in nature." The email said the archdiocese's decision not to be involved in the conference would not preclude future sponsorship or promotion of other conferences, "assuming we agree with the program and choice of speakers ahead of time."

The Catholic Speakers Organization, an Ohio-based company that books speakers for parish and diocesan events and other Catholic forums, is organizing the Cincinnati Men's Conference. The company did not respond to NCR's requests for comment.

In previous years, the Cincinnati conference has featured Catholic speakers such as Ray Guarendi, a psychologist with a show on EWTN, and Fr. Leo Patalinghug, who has had a cooking show on EWTN, as well as author Matthew Kelly and Fr. Mike Schmitz, co-host of the popular Bible in a Year podcast.

The Catholic Speakers Organization is organizing similar men's conferences this year in Indiana and Ohio with featured speakers including Curtis Martin, the founder of the Fellowship of Catholic University Students, filmmaker Matthew Leonard and Gus Lloyd, the host of "Seize the Day" morning radio show on Sirius XM's The Catholic Channel.

Arroyo is the founding anchor of the Eternal Word Television Network's "The World Over," a news magazine-style show that presents Catholic matters and topical news subjects from a conservative point of view. Far-right commentators such as Steve Bannon and Sebastian Gorka have appeared on the show, which also features a regular "Papal Posse" segment that often criticizes Pope Francis.

Arroyo, as a regular contributor on Laura Ingraham's Fox News' "The Ingraham Angle," has also generated occasional negative headlines for justifying the Trail of Tears atrocity in the 19th century, appearing to mock the lyrics of the deceased rapper Nipsey Hussle, lecturing Olympian gymnast Simone Biles for not dealing with her mental health before the 2021 games and suggesting that former New York City mayor Mike Bloomberg was going to be a "Biden puppet master." The last issue prompted the Anti-Defamation League in March 2020 to write a letter to Fox News expressing concerns about Arroyo employing anti-Semitic tropes on the air.

In 2021, Caviezel appeared at a far-right conference linked to QAnon, where he spoke in apocalyptic terms about current events in the United States, warning conference attendees that "the storm" — a QAnon buzzword — was upon them. Caviezel, who played Jesus in Mel Gibson's "Passion of the Christ" and played a starring role in CBS' "Person of Interest," has also espoused antisemitic conspiracy theories about cabals of liberal elites secretly killing children to harvest adrenochrome from their blood for satanic rituals.

In recent years, Arroyo has interviewed Caviezel on his EWTN show and posted pictures of them together, including photos of them both at Mardi Gras in New Orleans, on Twitter.

Arroyo was recently chosen as the grand marshal for the Krewe of Endymion’s 2022 Carnival parade, which will be held Feb. 26 in New Orleans.

A version of this story appeared in the Feb 4-17, 2022 print issue under the headline: Cincinnati archdiocese withdraws support of men's conference.