Back to school with books, masks and liability waivers 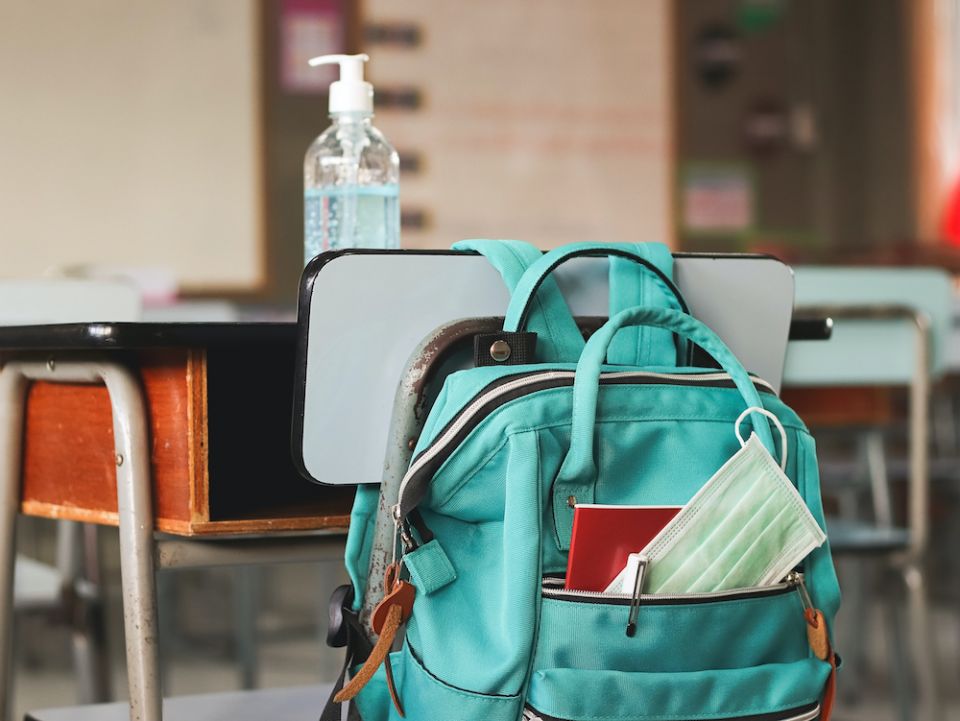 A disposable face mask is seen in a backpack hanging on a school desk holding a bottle of hand sanitizer. (Dreamstime/Phuttharak Chindarot)

As parents of Catholic school students across the country started in on that less-celebrated back to school ritual — paperwork — many of them discovered a new form in their packets or handbooks.

The one-page form is titled "Statement of Understanding and Release of Liability in Regard to Covid-19" in Florida's St. Petersburg Diocese.

Parents further north in the Pensacola-Tallahassee Diocese, too, acknowledged that their children's attendance at Catholic schools could expose them to the coronavirus, and "that such exposure or infection may result in personal injury, illness, temporary or permanent disability and/or death."

If that does come about, however, parents in the Palm Beach Diocese are to "hereby release, covenant not to sue, discharge, and hold harmless" the schools or their employees even if claims are "based on the actions, omissions, or negligence of the Diocese."

Along with those three Florida dioceses, various local media have reported that similar coronavirus liability waivers have been sent to parents of students returning in-person in the dioceses and archdioceses of Chicago; Cleveland; Little Rock, Arkansas; Mobile, Alabama; St. Augustine, Florida; Charleston, South Carolina; and Philadelphia, among others.

The forms highlight the precarious balance Catholic schools are striking between returning to the classroom in-person and the ethical and legal consequences of doing so.

"They're saying 'trust us, but also your child could get sick, permanently disabled or die,' and to me, the contradiction is painfully apparent," Jennifer Meade Magruder, the mother of a seventh grader in the Chicago Archdiocese, told NCR.

Meade Magruder, 47, a social worker and college professor, and her husband had already decided their son would attend school remotely when she saw the waiver. It confirmed her worst fears about what she said was the inadequacy of the archdiocese's plan.

One of the couple's friends decided to switch their son from in-person to remote because of the waiver.

In a statement sent to NCR, a spokesman for the archdiocese said that it would not prevent parents who do not sign the waiver from sending their students back to school, "provided they adhere to the protocols at school and accept the assumption of risk."

The statement also points out that parents could simply choose the virtual option if they do not wish to sign a waiver.

Meade Magruder wanted a hybrid option, using both in-person and online instruction, not remote, but the archdiocese is not providing it.

The waivers vary from diocese to diocese. Some expressly waive the right to sue while others simply ask parents to acknowledge the risks of in-person learning. While some seek to bar legal recourse even in cases of negligence, parents would still be able to sue over gross or intentional negligence.

Some legal experts and private school advocacy groups warn the waivers may not hold up in court.

"Even in states that are open to enforcing prospective waivers, there is no guarantee that a COVID-19 waiver will be enforced," reads a July analysis from the law firm Jones Day.

"We live in a society where a lot of people sue for a lot of different reasons, and people are concerned about it," Kathy Mears, the CEO of the National Catholic Educational Association, said in an NCR interview.

All Catholic schools are taking extensive measures to prevent the transmission of the virus among students, from social distancing to beefed up cleaning and ample remote and hybrid options, Mears said. Only a handful of dioceses — she put the number at no more than one in 10 nationwide — have decided to issue waivers.

Mears said a few dioceses' insurers have requested they issue the waivers.

"Overall, I think the vast majority of parents understand and agree that their children's schools and teachers shouldn't have to worry about being sued for fulfilling their roles as Catholic educators during a pandemic," Christopher Pastura, superintendent in the St. Petersburg Diocese, said in an email to NCR.

As in many dioceses issuing waivers, St. Petersburg, which also includes Tampa and its suburbs, offers a virtual option. Still, Pastura said his office is communicating with parents who voiced concerns.

"Given the fact that parents sign liability releases for nearly every activity in which their children participate, we thought this was reasonable," he added.

Many parents reacting to the news on social media in the last two months backed that up, saying they have no problem signing the waiver.

Heidi Li Feldman, a professor at Georgetown University Law Center who reviewed a number of dioceses' waivers, told NCR that parents should not be so confident.

"I have not seen as clear and broad rejections of liability very frequently in the course of this pandemic," she said.

Feldman agreed that the waivers' enforceability is questionable but said the forms could still dissuade parents and attorneys from taking action.

In the absence of the waivers, the only legal burden schools are under is to take "ordinarily prudent precautions," Feldman said, and it is the threat of legal action that holds them accountable to that burden.

"Once you backpedal from responsibility, you don't have the same incentive to act with care," she said. "And during a pandemic we would want people to be acting very much with care towards disease transmission."

Two dioceses have gone further to shield themselves from liability.

In the Charleston Diocese, officials required teachers to waive their rights to sue if they fall ill or die from the coronavirus, something at which some educators there balked.

"It's this or no job," an anonymous teacher told The Island Packet newspaper.

In the Philadelphia Archdiocese, its waiver, meant to prevent lawsuits, is now threatening to cause one.

Instead of waiving rights to sue over harms from the coronavirus, the waiver asks parents to acknowledge that there is general risk of injury and death from returning to school in-person, including, but not limited to, COVID-19.

"Basically, everything under the sun that deals with negligence, this waiver seeks to eliminate a parent's right to sue," Jordan Strokovsky, a local attorney one parent retained to examine the waiver, told NCR. "That's outrageous and unconscionable."

Strokovsky said his client, whom he did not identify, would have been fine with a waiver restricted to the coronavirus, but the archdiocese's version went too far.

The archdiocese told local media that it is reevaluating the waivers.

The whole debate over waivers may be rendered moot if Senate Majority Leader Mitch McConnell and Senate Republicans get their way.

The HEALS Act, the Republican stimulus proposal to succeed the CARES Act, includes a sweeping a sweeping liability shield for schools.

"No bill will be put on the Senate floor that does not have liability protections," the majority leader told reporters in late July.

Coronavirus | Back to school with books, masks and liability waivers

The church after coronavirus: Crisis exposes what is essential