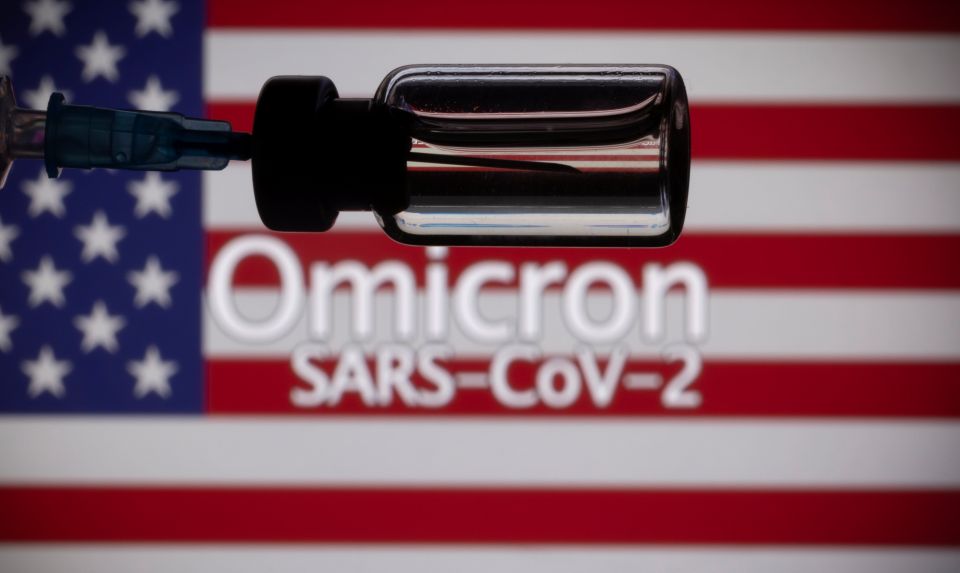 A vial, syringe and U.S. flag are seen in this illustration about a new variant of the coronavirus the medical world has labeled "Omicron." (CNS photo/Dado Ruvic, Reuters)

Cape Town, South Africa — Travel bans on southern Africa are based on "a deep-seated racism" and have a severe impact on the poor in the region, where many livelihoods depend on the tourism industry, said Father Russell Pollitt, director of the Jesuit Institute in Johannesburg.

Another African Jesuit who works with the Vatican also expressed anger that South Africa was being punished after detecting a new COVID-19 variant and letting the world know.

Governments around the world announced new travel restrictions in late November, after South Africa said it was investigating the emergence of a coronavirus variant dubbed omicron by the World Health Organization.

While omicron has been detected in many countries in people who have not traveled to or from southern Africa, the United Kingdom "has not closed its borders to Belgium, and Canada has not shut off the United States," Father Pollitt said. The selective travel bans show "a deep-seated racism in the global North ... a belief that Africans are bearers of disease."

A woman who, with her husband "runs a hospitality business that provides jobs for seven or eight people told me that all the bookings made for December to March (South Africa's summer season) — which would have put them back on their feet — have been canceled," Father Pollitt said. They will be forced to close the business that they had managed to keep afloat through South Africa's lockdown periods in 2020 and 2021 by drawing down their savings, he said. Their staff, who had been paid throughout the pandemic, will lose their jobs, he said.

"So many people are affected" by the travel ban, the priest said, noting that "people who would be paid to do cleaning work that's needed over the holiday period will now not receive that income."

South Africa, which has a population of 59 million, has a 24% unemployment rate.

South Africa's currency lost value against the dollar when the omicron variant was announced, resulting in hikes in transport and food costs.

This has health impacts, Father Pollitt said, noting that eating less and cheaper food means that people "don't have the sustenance they need for their immune systems to be able to fight off infection." Also, with minibus-taxi fares rising, people will find it increasingly difficult to get to clinics for medical treatment and medicines, he said.

Jesuit Father Charles Chilufya, director of the Justice and Ecology Office for the Jesuit Conference of Africa and Madagascar, coordinates the Africa Task Force of the Vatican's COVID-19 Commission. What angers him, after 5.26 million deaths over 23 months from COVID-19, is that wealthy countries have been happily vaccinating their populations and allowing Africa to languish in a vaccine desert.

"After so many warnings that if we don't vaccinate the entire world we would get new variants that we may not be able to handle, such a type (omicron) has been detected," Father Chilufya said in an email to The Catholic Register, based in Toronto.

"And the response of nations has been to isolate South Africa that has done good to detect the variant and did well to let the world know. ... We are angry," he said.

Only 102 million people in African countries, or 7.5% of the continent's population, are fully vaccinated, according to the World Health Organization.

As an economist, Father Chilufya is acutely aware of how uncontrolled COVID-19 is tearing apart lives and livelihoods around the world.

"If we don't achieve a 70% vaccination rate globally by mid-2022, we will lose more than $5 trillion in global economic losses over the next five years," he said.

Father Chilufya has joined forces with health care professionals and activists around the globe calling for suspension of certain patent protections so that vaccines can be produced in or near the countries that need them.

"We need more than short-term reactions of vaccine donations," he said, noting that the patent waiver "is what will save unnecessary loss of lives, forestall another serious economic fallout and food shortages."

"To isolate countries like South Africa and others in the region is no solution," Father Chilufya said. "The new variant has spread all across the globe and affirms what we have been told before — 'no one is safe until everyone is safe.' Rather than divide the world, we urge the rich nations to provide leadership and put in mechanisms to ensure that everyone is vaccinated."

As well as the travel ban imposed by developed countries, Zimbabwe has announced its own new restrictions, including a 10-day quarantine period for people entering the country. But these are largely ignored, said Yvonne Fildah Takawira-Matwaya, who chairs the Zimbabwean bishops' justice and peace commission.

Most people in the southern African country, which has a population of 16 million and an unemployment rate of 90%, survive on $1 a day. They eke out a living in small-scale informal trade, mostly selling goods bought in neighboring South Africa.

"People are worried about how they're going to survive. No one is willing to stay home; they can't afford to," Takawira-Matwaya told CNS Dec. 10.

People find ways to enter and leave Zimbabwe, no matter what the restrictions, she said.

Representatives of the International Organization for Migration's 174 member states met in Geneva early in December to consider how to create accessible cross-border mobility options in the face of more than 111,000 travel-related measures taken to contain COVID-19.

António Vitorino, director-general of the IOM, said the pandemic "seems to have accelerated the hostile rhetoric toward migrants that has been growing in the last decade."