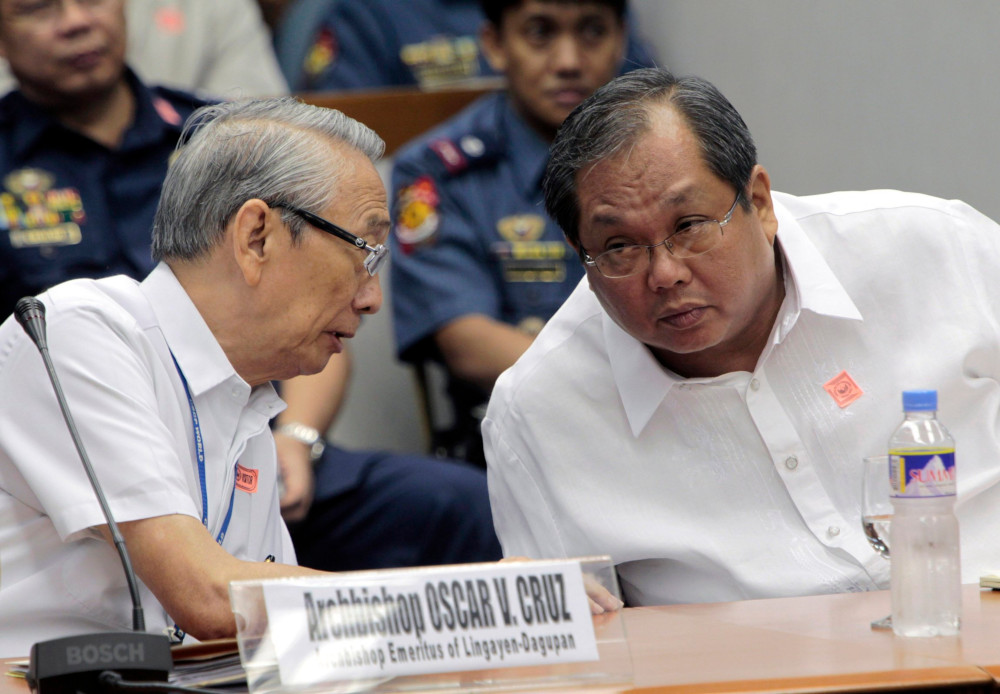 Retired Archbishop Oscar Cruz of Lingayen-Dagupan, Philippines, is pictured in a file photo talking to then-Interior Undersecretary Rico Puno during a Senate inquiry. Cruz died Aug. 26, 2020, in a Manila hospital of COVID-19 complications, the Catholic Bishops' Conference of the Philippines announced. (CNS/Reuters/Romeo Ranoco)

Retired Archbishop Oscar Cruz of Lingayen-Dagupan, former president of the Philippine bishops' conference, died in a Manila hospital Aug. 26 after complications from COVID-19, the Catholic Bishops' Conference of the Philippines announced.

The bishops' conference said Cruz was cremated and would be laid to rest Aug. 28 at St. John the Evangelist Cathedral in his former diocese, north of Manila.

Cruz, 85, who was also a leading canon lawyer, served as judicial vicar of the bishops' conference national tribunal after he retired in 2009. He obtained his doctorate in canon law at the Pontifical Lateran University in Rome.

He also was a staunch critic of several Philippine presidents, speaking out against "structural" or "social sins," reported ucanews.com.

In a 2015 interview, the archbishop predicted that then-presidential aspirant Rodrigo Duterte would be "worse than a dictator" if elected.

"Such a creature is dangerous, much more if he is chosen as the Philippines' head of state or leader," he said in an interview.

Less than a month after Duterte's election, Cruz called Duterte "a fool" after the president promised to eradicate illegal drugs in "just six months."

In 2014, he called former President Benigno Aquino "anti-Christian and unwise" for supporting a reproductive health law that legalized government procurement and distribution of contraceptives.

"His mother (former president Corazon Aquino) would receive a papal award. But here comes the son who is anti-Christian. ... He's crossing thin ice ... irresponsible. He has a sense of omnipotence, arrogance," Archbishop Cruz said in an interview.

The Catholic Church hierarchy was not even spared when the archbishop commented on the way his fellow bishops handled sexual abuse cases involving clergymen.

In 2017, he spearheaded an investigation into Fr. Arnel Lagarejos, who was arrested for attempted sexual abuse when caught taking a 13-year-old girl to a Manila motel.

"As per experience, there are more cases of pedophilia. More of it," Cruz said in an interview.

His successor in Lingayen-Dagupan Archdiocese, Archbishop Socrates Villegas, described him as a faithful shepherd and courageous prophet.

"The world is poorer by his passing away. Heaven has a new jewel. My tears flow. My heart is grateful that in this lifetime I met a great churchman like Archbishop Oscar V. Cruz," Villegas told ucanews.com.