The 'happiest place on Earth' shut down, hunger didn't

Central Florida parish steps up to needs during coronavirus pandemic

by Martha Cusimano
Coronavirus
This article appears in the Saints Next Door feature series. View the full series. 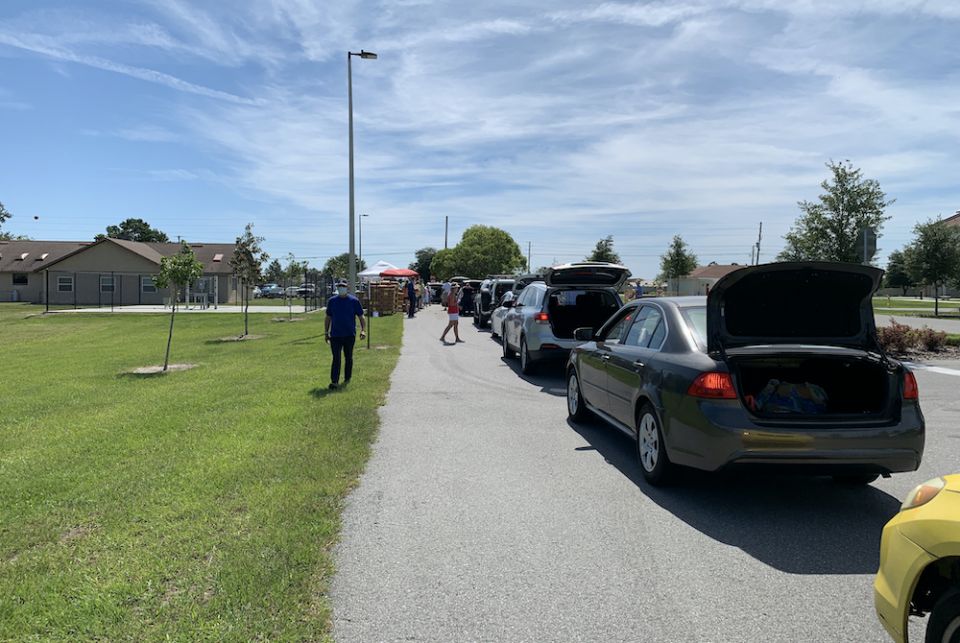 Cars line up at St. Rose of Lima Catholic Church in Kissimmee, Florida, May 8 with their trunks open to receive food in a safer, no-contact method during coronavirus pandemic. (Martha Cusimano)

Kissimmee, Florida — St. Rose of Lima Church here was closed. There was no Mass, but hundreds of cars began to wind their way through the 33-acre campus, quietly filling the parking lots. It was a balmy, spring morning as a huge refrigerated tractor-trailer truck pulled up, with a second truck full of healthy produce, both sent by Second Harvest Food Bank of Central Florida. An army of volunteers went to work unloading the trucks and setting up a gauntlet of food, and the cars kept coming.

It was as unprecedented as the coronavirus is deadly. A brief parking lot survey of clients revealed why they came: out of work were a furloughed Disney bus driver; a pregnant woman who worked at the Orlando International Airport but was sent home due to the virus threat; a SeaWorld cast member; and a seafood worker, whose company had supplied the huge restaurant trade in Central Florida.

The number of people facing food insecurity these days is legion. In pre-pandemic times. St. Rose Pantry helped 170 families a week. On May 7, 800 cars, representing 1,241 families and 3,131 household members, received 47,000 pounds of food by day's end. Pantry distribution increased 730% on that special distribution day. The new normal is still emerging for the weekly pantry distribution, but the average over five weeks is an increase of 230%. 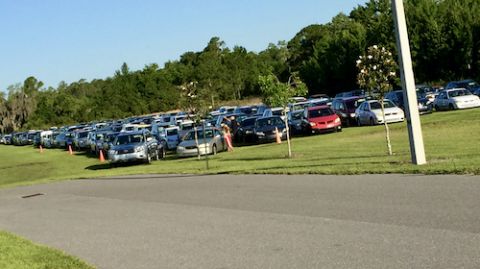 Volunteers direct 800 cars of people who have come to St. Rose of Lima's food pantry May 8. (Martha Cusimano)

Orlando built its food insecurity infrastructure with Second Harvest as the bridge between surplus food and the people who need it most, along with 500 charitable partners in the communities they serve. The St. Rose Pantry was founded during the Great Recession of 2007-09, when economically devastated neighbors and parishioners began knocking on the door of the church office asking for help. It's been serving Poinciana and Kissimmee ever since.

Dave Krepcho, CEO of Second Harvest, told NCR about the effects of the virus on the region: "435,161 meals are being missed each week in the Central Florida area solely due to the devastating economic impact. As we know, we'll all be in recovery mode for months and into the years — this will be a marathon. No one can do this food security work alone. Partners like St. Rose of Lima are such a critical force in this battle against food insecurity." Prior to the virus, Second Harvest provided food for 400,000 unduplicated people a year or 150,000 meals a day. Now they are providing 300,000 meals a day. The number of people who are out of work is unprecedented.

St. Rose has always been blessed with an abundance of volunteers, drawing heavily from the parish, the community, and nearby Solivita, a development for people 55 years and older. The St. Rose volunteers are from all over the U.S., Puerto Rico, China, the Philippines, South America and beyond, most of them immigrants to the Sunshine State. When the pandemic struck the nation with such deadly force, the St. Rose community and all those around it channeled their collective generosity through the pantry they had built during the last national catastrophe of the Great Recession. 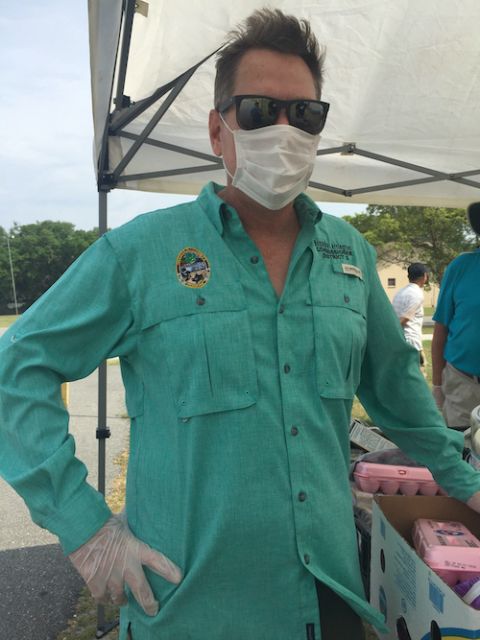 The virus temporarily changed that dynamic. The people who constitute the core of the volunteer base, retired community members and devoted parishioners, are most at risk for negative effects of the virus, so many stayed in the safety of their homes. Fortunately, the parish has a long partnership of trust with Osceola County government, and officials called to ask how they could help. Led by District 3 Commissioner Brandon Arrington, Osceola County workers joined the St. Rose of Lima team to provide immediate help and fill the volunteer gap.

"The new normal is still developing, but the new reality has changed the way we work, worship, learn and play. The economic impacts have been immediate and harsh, as physical distancing forced the closure of many businesses," said Arrington.

St. Rose worked with the Osceola County Department of Health to redesign its delivery system, reducing potential contamination points, protecting volunteers and clients. They developed a drive-by system, with socially distanced, gloved and masked volunteers delivering vital food into open trunks. It worked with efficiency and safety and may be the one of the many new practices that lives beyond the virus.

"We are meeting people who can't get food stamps. Others who haven't received their unemployment compensation. Many of the new families I saw were young people, those who live paycheck to paycheck, and many who never thought they would need a food pantry. I heard a great many thank you's and God's blessings today," said Robert Doktor, pantry director.

Food donations dried up in early March when donation drop-off points were closed down. The pantry increased its orders to Second Harvest to replenish food needed by so many. When friends and neighbors learned of the food shortages, they turned driveways into donation drop-off points and 5,000 pounds of food was collected within a few days. Donations climbed as word got out, helping fund food purchases that went from $500 a week before the virus to $6,000 in recent weeks to keep up with the extreme need.

Pre-pandemic, St. Rose helped 30,000 families a year from an area where the poverty rate was 5.6% higher than the national level, a decade of recovery from the Great Recession. Almost 100% of children in the surrounding elementary schools qualified for the USDS free and reduced lunch program before the pandemic struck. Pantry clients tend to be working families for whom even two incomes in low-salary jobs aren't enough; retired people who can't make it on their fixed incomes; grandparents raising grandchildren; people with health problems; the newly arrived; people in transition from life crises; and the massive number of economically displaced people due to the pandemic.

Memorial Day is expected to mark 100,000 American deaths from COVID-19, and U.S. unemployment levels are poised to break the 1933 historic Depression record of 24.9%. Pope Francis convened an international group of Catholic scholars to assess the aftermath of the pandemic and determine how the church can best respond to the post-pandemic needs of the world. One of the segments focused on the economy and food:

"Covid-19's unfolding food crisis — How to feed the world in a pandemic: The COVID-19 pandemic could result in more than a quarter of a billion people suffering acute hunger by the end of the year," said the Pope's Economics Taskforce.

There is no sign that the virus and its economic effects on families and businesses will wane anytime soon. The state jobless claim site crashed several times in the last three weeks as people in Florida tried to apply for their unemployment insurance. In a state with an overall unemployment rate of nearly 13%, for people connected to the tourism industry it's even higher. At least a quarter of all Florida unemployment filings March 15 through April 21 were by people employed in tourism. Nationwide, the unemployment rate in April for leisure and hospitality workers was 39.3% (in January, it was 5.9%.) Florida is re-opening swiftly but future vacationers and convention attendees will want to know when they can trust that the "happiest place on earth" is safe enough.

[Martha Cusimano is a freelance writer based in Poinciana, Florida.]

Read this next: World hunger is its own pandemic: Aid workers brace for second-wave crisis

Coronavirus | The 'happiest place on Earth' shut down, hunger didn't

No one should be hungry during the Christmas season