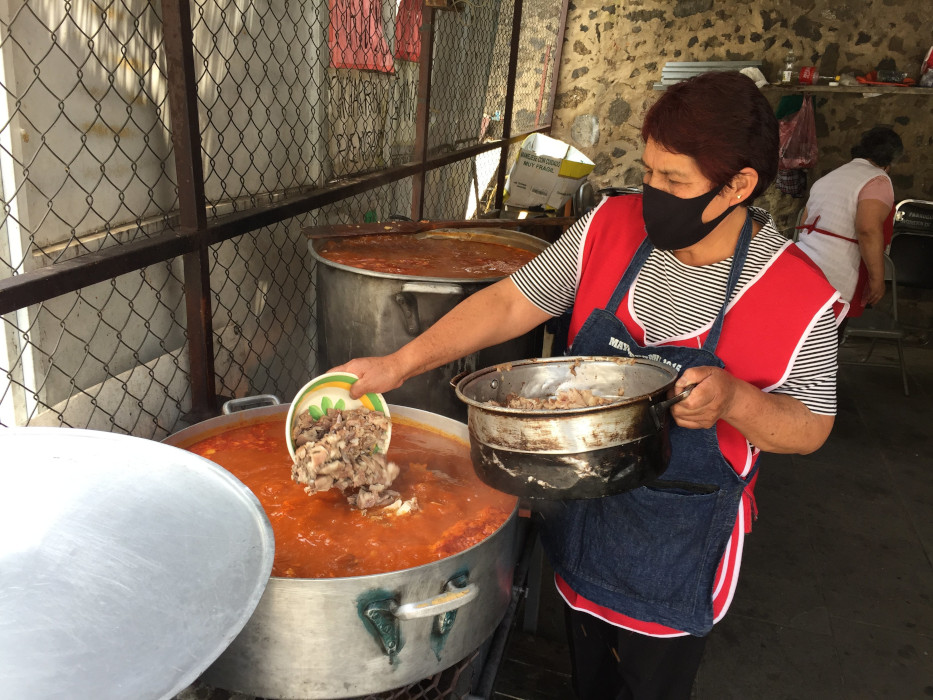 A volunteer stirs pozole, a pork and hominy soup at Our Lady of the Assumption Parish in Mexico City Aug. 17, 2020, during the COVID-19 pandemic. (CNS/David Agren)

People started lining up shortly after noon outside the 16th-century Our Lady of the Assumption Parish in southern Mexico City. Most practiced social distancing as best they could on a bustling sidewalk; all were clutching empty food containers.

Upon entering the parish grounds, they washed their hands, registered with a volunteer and had their containers filled with pozole, a pork and hominy soup prepared from a pig's head donated the previous day.

"It's something delicious and well prepared ... and made with love," said Susana Álvarado, parish volunteer, after stirring a giant pot of pozole with a wooden paddle.

Similar scenes of charity have played out at parishes around the country as church communities respond to the coronavirus pandemic, which has caused hardship in Mexico, where confirmed COVID-19 cases remain stubbornly high and the economy has cratered.

But as the pandemic drags on and the country reopens, priests and religious are rethinking their responses and adapting to realities such as unemployment and rising poverty, especially in places like the periphery of Mexico City, where many earn their livings in the informal economy and have not been able to shelter in place or work from home.

Many parishes, too, lack resources, having not received money in the collection basket because of suspended services.

"Many people lost their work. Many people spent their savings by sheltering at home. They're now at the end of their tethers, and families can no longer bear it," said Fr. Sergio Jorge García Llanos, pastor of Our Lady of the Assumption in Milpa Alta, a bucolic borough famed for nopal cactus farming.

"We're helping with what little we can, with food," he said from his office in a church still under repairs from the 2017 earthquake, which toppled the belfry. "But now in the pandemic, we're discovering families that we didn't know before and need our help."

The coronavirus pandemic has hit Mexico hard. The death toll topped 59,000 Aug. 20 — third-highest in the world — although health officials insist the pandemic is slowing and say they've succeeded in their goal of keeping hospitals from collapsing.

Priests see signs the pandemic may have peaked — testing is scant, so confirmed cases are low — but say the pandemic is not likely to end anytime soon.

The economic fallout also is not ending anytime soon, they say. Mexico's economy contracted more than 17% in the second quarter, after not growing in 2019. It also lost 1.1 million formal jobs between March and July, with a slight uptick in employment in August, according to the government.

"There's a lot of informal activity to make ends meet," said Fr. Robert Coogan, an American priest in the Diocese of Saltillo. "Everybody who goes by [the house] wants to cut the grass, wants to wash the car. A lot of houses have a sign out front: autolavado [carwash]. On weekends, people want to sell food." 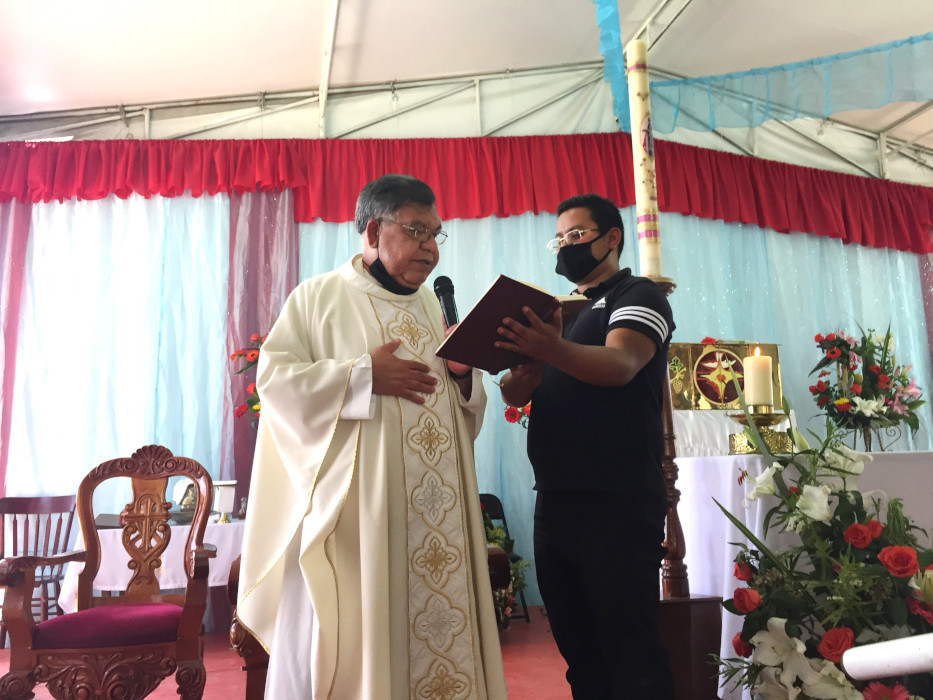 Fr. Sergio Jorge Garcia Llanos prays at an Aug. 17, 2020, Mass at Our Lady of the Assumption Church in Mexico City. The parish established a soup kitchen serving 400 meals a day for those hit hard by the pandemic, and the priest said parishioners have met people they did not even know who need help. (CNS /David Agren)

The Mexican government, meanwhile, offered only modest pandemic relief in the form of loans of roughly $1,100 for small businesses and pushing forward payments for social programs.

Both the Mexican bishops' conference and the Jesuits recently met with the Interior Ministry to provide details of its pandemic response, said two priests involved in the discussions. One such program, run by the Jesuits, helps parishes organize local communities.

Narváez said the government sought alliances with churches "to be able to get into places where they can't get to."

Early in the pandemic, Caritas partnered with the private sector and foundations to deliver care packages, something Narváez described as "rapid response." He said Caritas is now focusing on "livelihoods" by establishing a job bank, which also includes partnerships to teach skills and provide microcredit.

"Those who have contacted us require modest jobs ... bricklayers, painters, people who want to work as domestic employees," Narváez said. "Almost 70% of the requests have been from women."

"It's really hard to make ends meet," she said while queuing for food at the parish. "This (pandemic) is going to last a while longer. ... Many people still say it isn't true, many don't wear masks, don't use gel, head out like nothing is happening."

García said, "In this pandemic we realized we have to change our way of seeing things, we have to be more sharply focused to know how to help."

Narvaez added, "We touched bottom in the sense of exhausting the few resources that we had to be able to survive. So I think in that sense we need to re-educate ourselves to be a less ostentatious church, to be a church with fewer appearances ... to be more austere. I think that's what we learned."

In the western state of Michoacán, Fr. Andrés Larios said many people were receiving remittances from the United States — sent to Mexico in record numbers during the pandemic — or accepting handouts of food from drug cartels.

"What the other people (not receiving remittances) are doing is selling their clothes cheap to buy food or selling food," said Larios, priest in the city of Apatzingán. "This is how they're surviving."