Vatican City — Pope Francis and retired Pope Benedict XVI have both received first doses of a coronavirus vaccine as part of the Vatican's inoculation campaign, the city-state announced Jan. 14. 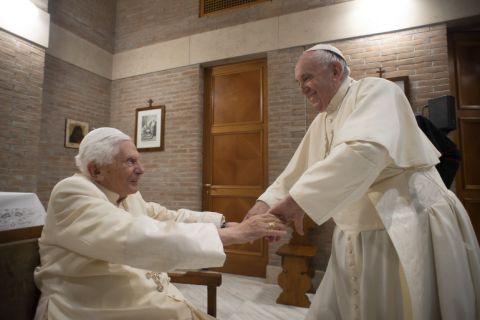 Pope Francis, right, greets retired Pope Benedict XVI at the retired pope's residence during a visit with new cardinals after a consistory at the Vatican Nov. 28, 2020. (CNS/Vatican Media)

Francis has urged people across the world to receive a vaccine, even suggesting there is a moral obligation to do so as a way to protect yourself and others from contracting COVID-19.

"I believe that morally everyone must take the vaccine," the pontiff said in a Jan. 10 interview for Italy's TG5 news program. "It is the moral choice because it is about your life but also the lives of others."

The Vatican, which is a sovereign international entity separate from Italy, began its inoculation campaign Jan. 13. The director of the city-state's health service has said it will first offer the Pfizer/BioNTech vaccine, but may also use other products as they become available.

The Vatican has set up a small clinic to administer the vaccine inside the atrium of Paul VI Hall, a large auditorium space usually used for papal audiences. The city-state has promised to offer the vaccine to all of its residents, staff members and their families.

Italy began its own vaccination campaign Dec. 31. As of Jan. 14, the country had administered first doses to nearly 886,000 people, or about 1.5% of its population.