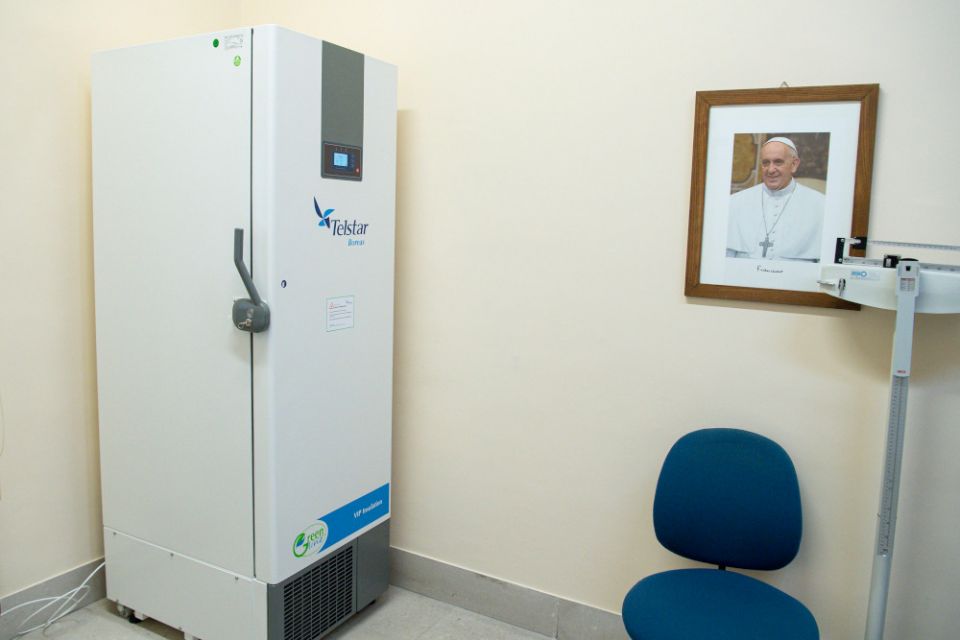 A freezer to store the Pfizer-BioNTech COVID-19 vaccine is seen at a clinic for vaccinating Vatican employees, residents and retirees in the atrium of the Paul VI audience hall at the Vatican in this photo released Jan. 13, 2021. A variety of sanctions have been issued by the head of the commission governing Vatican City State for citizens, residents and personnel who fail to follow current COVID-19 measures. The sanctions cover employees who refuse vaccination. (CNS/Vatican Media)

Vatican City — The Vatican will sanction employees who refuse to get a vaccine, unless they have "proven health reasons" not to, according to a new Vatican decree.

A variety of sanctions for anyone violating measures intended to slow the spread of the novel coronavirus were included in a decree signed Feb. 8 and later posted on the Vatican website by the head of the commission governing Vatican City State.

While the protocols apply to everyone at the Vatican, the harshest sanctions are reserved for Vatican employees whose contractual obligations include on-the-job health and safety regulations.

Because of the current state of emergency, getting the COVID-19 vaccine is part of a series of mandatory health and safety requirements for all employees, unless they have "proven health reasons" to not be inoculated; in legitimate cases, those employees will be given a different job that reduces their risk of spreading or contracting the virus, the decree said. They will receive the same pay.

For employees who lack a proven medical reason for forgoing the vaccine, a refusal to be inoculated during the current health emergency exposes them to the same range of potential sanctions that come with refusing any of the other mandatory health exams and safety measures that are part of their terms of employment. The harshest sanction is a termination of employment.

The decree was signed by the head of the commission governing Vatican City State, Cardinal Giuseppe Bertello, who tested positive for COVID-19 in December, and Bishop Fernando Vergez Alzaga, secretary-general of the office.

The Vatican has had at least 30 reported cases of COVID-19 since March 2020 and no reported deaths.

The Vatican City State's "public health emergency" decree said receiving the vaccine is part of making a "responsible decision" that recognizes that refusing the vaccine "may also constitute a risk to others" and can lead to a serious increase in risks to public health, quoting a December 2020 joint document by the Vatican COVID-19 commission and the Pontifical Academy for Life.

The current health crisis means "there is an urgent need to issue the following rules that have the force of law," and those rules went into effect starting Feb. 8, it said.

A public health emergency must be addressed in ways that "guarantee the health and well-being of the working community in the respect of the dignity, rights and freedoms" of everyone, it said.

Measures must be adopted according to the risks posed to the public, it said. Those measures, it added, apply to Vatican City State and its extraterritorial properties, its citizens, residents and personnel serving the governing office of Vatican City State, the Roman Curia and all other related institutions.

The measures in place, it said, include: limitations on the movement and gathering of people; social distancing; isolation and quarantine; sanitation norms; and the use of personal protective equipment.

Sanctions for not following those measures range from fines starting at 25 euros ($30) to 1,500 euros ($1,800) with fines doubling for a failure to comply or repeated infractions. The Vatican gendarme is tasked with policing compliance and imposing the sanctions, it said.

When it comes to the protocol for COVID-19 vaccination, it said Vatican employees were already subjected to safety rules concerning "biological agents," requiring them to reduce the risk of exposure, spread and infection of such agents in ways that included receiving vaccines scientifically proven to be effective.

The Vatican began its voluntary vaccination program in mid-January and expected it would receive enough doses to cover the needs of the Holy See and Vatican City State.

Pope Francis, who has been vaccinated, has said everyone should take the vaccine because those who did not would not only put their own lives at risk, but also the lives of others.