With the coronavirus pandemic, Catholic Charities agencies may feel as though they are reprising a scene from the Gospel story of the multiplication of loaves and fish — feeding multitudes of mouths with fewer resources.

For example, in July, Catholic Charities Archdiocese of San Antonio distributed food to as many as 4,500 people per week, compared with its pre-pandemic level of about 700, according to Antonio Fernandez, president and CEO of the agency.

"I'm so happy we're in August," Fernandez said. "July was absolutely a nightmare."

Catholic Charities agencies across the country have met the increased demand for their services, even as they deal with their own internal challenges — everything from canceled fundraisers to staff members who have tested positive for the virus.

Dominican Sr. Donna Markham*, president and CEO of Catholic Charities USA, said that nationally during the last four months Catholic Charities has distributed $400 million in emergency aid to people in need because of the pandemic. That's on top of its usual assistance, which totals $5 billion a year, she said.

All parts of the country have been hit by COVID-19, the disease caused by the novel coronavirus. Texas has been a hot spot this summer.

One of the recipients in San Antonio is a 38-year-old single mom of three children. She takes a Catholic Charities parenting class. When she lost her job as an assistant store manager, she turned to the agency for additional assistance. She now receives food, diapers and other baby items at curbside pickups the agency operates several times a week.

In March, Catholic Charities Archdiocese of San Antonio made donations to agencies in New Jersey and New York when the virus hit those states hard. Now it is receiving assistance from other parts of the country.

Markham said with the sharp increase in unemployment, many people now need financial assistance to buy food and pay for rent. That need is driving up the demand for Catholic Charities' services and is at the forefront of a national policy debate about additional federal aid. Democrats and Republicans in Washington have been unable to reach a deal.

The two sides stopped negotiating on Aug. 7, and as of Aug. 17, hadn't returned to the bargaining table. The major sticking points are the amount of total aid and the levels of jobless benefits and assistance to state and local governments.

"The priority has to be the dignity of life," Markham said. She said Catholic Charities is working with lawmakers on Capitol Hill to ensure that the government provides enough assistance so that people won't go hungry and will be able to stay in their homes or apartments.

"The government has a role," said Msgr. Kevin Sullivan, executive director of Catholic Charities Archdiocese of New York. "And the extent of the financial devastation that has hit hardworking families means that we do need the government to step up in a variety of ways to bridge the gap until the economy and jobs come back." 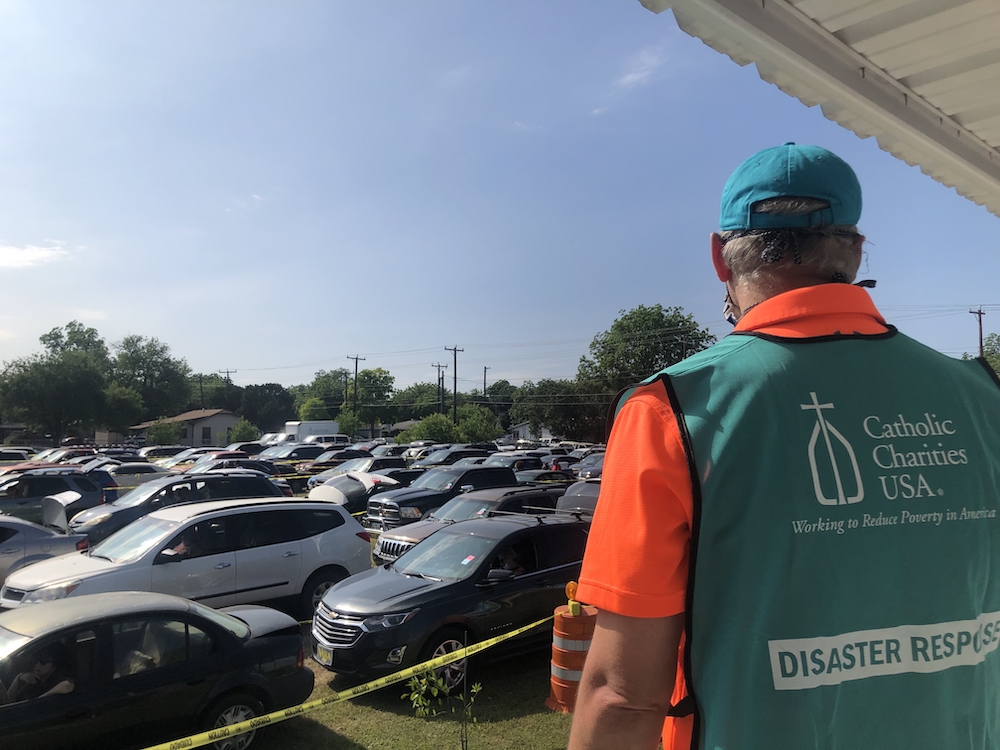 The unemployment rate has fallen since April, but at 10.2% in July, it's far higher than the 3.5% rate in February before the virus struck the country. More than 30 million Americans are now receiving unemployment benefits, according to The Washington Post.

President Donald Trump signed an executive order on Aug. 8 to provide extra unemployment insurance among other measures, but critics say the assistance isn't enough, and Democrats and some Republicans question whether the president's action is constitutional.

Sullivan said that aid from the federal Payroll Protection Program (PPP) has been essential for Catholic Charities of the Archdiocese of New York, which is made up of a federation of 90 independent agencies that combined have 15,000 to 20,000 employees.

He gave the example of being able to keep open apartments and homes that Catholic Charities agencies run for people with developmental disabilities.

"We shifted the way that we staffed [the homes] to reduce the number of people," he said. "We provided PPE [personal protective equipment] to all of our staff. We made sure that our staff and our residents were as safe as possible, and continued to give them the help they need."

Markham noted that first wave of Catholic Charities' response to the pandemic entailed distributing masks, gloves and personal protective equipment to its front-line workers to ensure that agencies could stay open.

Another challenge for Catholic Charities agencies has been the cancellation of fundraising galas because of the pandemic. Those events are big sources of revenue for the agencies. Fernandez said that Catholic Charities in the Archdiocese of San Antonio canceled galas in April and May and won't hold its usual two galas later this year.

In the New York Archdiocese, two major fundraising events that had been scheduled for May were canceled, Sullivan said. The two annual events usually raise over $3 million, he said.

Another obstacle for Catholic Charities agencies is their own workers testing positive for the virus, or dying from it. Fernandez said that at one point 100 of the agency's 450 workers were under quarantine. Markham said several Catholic Charities employees have died from the virus.

Despite the challenges, Catholic Charities has been able to continue its mission of helping the most vulnerable.

The line outside of the Father English Food Pantry in Paterson, New Jersey, stretches through several city blocks June 8 for people seeking food assistance from the program run by Catholic Charities of the Diocese of Paterson. (CNS/Courtesy of Catholic Charities Paterson)

Nationally, Markham said the agency has been helped by donations from corporations, foundations and individuals as well by assistance from the Federal Emergency Management Agency (FEMA).

Meanwhile, Catholic Charities USA and local agencies have been working with food processors and distributors to supply food to the hungry.

Thanks to donors, Sullivan said, Catholic Charities in the New York Archdiocese provided over $4 million in financial assistance during a two-month period in the "hardest-hit areas in New York City" to immigrants who weren't eligible for government aid.

In the Archdiocese of San Antonio, Catholic Charities has been able to meet an increased demand for mental-health services. Fernandez noted that his agency is working with parishes to provide more counseling to rural parts of the archdiocese.

About 80% of the counseling is now conducted through Zoom, he said.

Catholic Charities executives say anyone can assist with coronavirus relief. Markham said three ways to do so are through prayer, volunteering and financial donations.

Sullivan brought up another way people can help.

"We also need people to continue to speak about the needs of our neighbors who are most vulnerable, who are most struggling, and to make sure that we always consider them in the decisions that we make," he said.

While Catholic Charities is now strapped, at the same time, the virus has spawned countless acts of kindness and charity.

Fernandez  was told of a 9-year-old girl from a local Catholic school who made and sold pizzas to help with coronavirus relief efforts. She raised $240 for Catholic Charities.

"Sometimes when we're in our darkest hour, that's when we strive to be our best," Fernandez said.

*Dominican Sr. Donna Markham's name has been corrected from an earlier version.