10 summer books that are not about Pope Francis 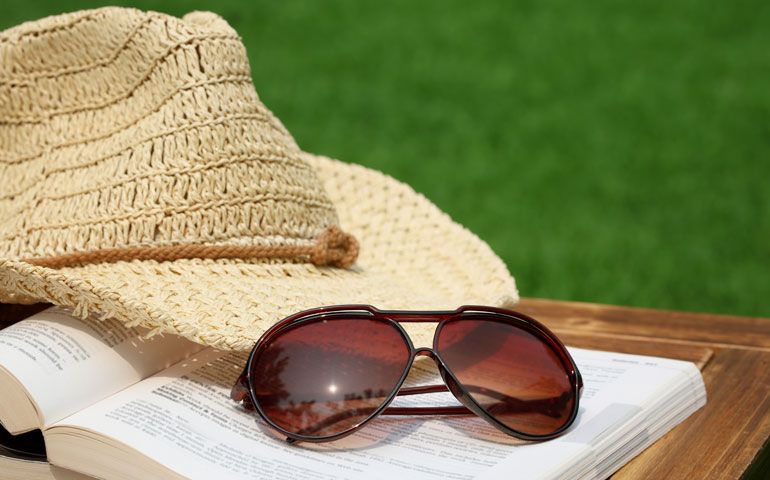 People can't seem to get enough of Pope Francis. It seems the media are alerted every time he sneezes -- or at least every time he says something. NCR has dedicated a section of its website to the "Francis Chronicles," while Maryknoll Fr. Joe Veneroso updates his AFATT ("All Francis, All The Time") Facebook page several times daily.

Book publishers, too, recognize that celebrities sell books -- and Francis has quickly become a spiritual celebrity. Nearly every publisher had a pope book at the recent Religious Booksellers Trade Exhibit, an annual gathering of Catholic and other religious publishers. There were papal biographies, collections of his previous writings, kids' books about him and, of course, his first published book in English, The Church of Mercy. Writings about his namesake, St. Francis, also were given the papal spin.

But let's say you want to read something more substantial than the latest Stephanie Plum mystery, but you're all Francis'd out? Here are my recommendations for 10 summer spiritual books that are not about Francis. Full disclosure: I have not yet read all these books, but I've researched them enough to put them on my summer to-read list:

Mercy in the City by Kerry Weber (Loyola Press, $13.95): As an urban dweller, I'm very interested in a book that promises to teach me "How to Feed the Hungry, Give Drink to the Thirsty, Visit the Imprisoned, and Keep Your Day Job," as the subtitle says. I've also long admired Weber's writing in America, where she is now managing editor.

Oscar Romero: Love Must Win Out by Kevin Clarke (Liturgical Press, $9.99): Another America editor, Clarke, has written a biography of the archbishop of San Salvador, El Salvador. Due out in August, the book is third in a new series of brief biographies from Liturgical Press called "People of God." (The first two are about Pope John XXIII and Thomas Merton.)

Accidental Theologians: Four Women Who Shaped Christianity by Elizabeth A. Dreyer (Franciscan Media, $15.99): Also due out in August, this book looks at how Hildegard of Bingen, Catherine of Siena, Teresa of Avila and Thérèse of Lisieux challenged the church in their day. Although I've read individual books about these women, I'm excited to see the connections Dreyer makes about all four of them.

The Ground of Love and Truth: Reflections on Thomas Merton's Relationship With the Woman Known as "M" by Benedictine Sr. Suzanne Zuercher (ACTA, $14.95): Before she died in June, Zuercher shared her insights about Merton's controversial relationship with a nurse, identified in his journals as "M" (though the woman's full name has been revealed elsewhere). I'm curious to read her take on this.

Ask the Beasts: Darwin and the God of Love by Elizabeth A. Johnson (Bloomsbury Continuum, $22.99): OK, so this book of theology might not exactly be beach reading, but wouldn't reading about the natural world and the morality of ecological care of it be perfect for reading around a campfire? Anyone interested in the intersection of science and religion should read this one.

Got Religion?: How Churches, Mosques and Synagogues Can Bring Young People Back by Naomi Schaefer Riley (Templeton Press, $24.95): For years, I have written about how the church could bring back Generation X; now other authors are doing the same with millennials. Jewish journalist Riley profiles promising models from successful groups from a variety of religious traditions. Of course, I'm particularly interested in the Catholic chapter, called "Joining the Service: How the Catholic Church is Training a New Generation of Laypeople to Be Spiritual Leaders."

Spiritual Leadership for Challenging Times: Presidential Addresses From the Leadership Conference of Women Religious, edited by Immaculate Heart of Mary Sr. Annmarie Sanders (Orbis Books, $20): If a collection of presidential addresses sounds "ho hum," then it must not be ones from LCWR. These prophetic words from 10 LCWR presidents reveal why the current Vatican inquiry into the group is hogwash.

A Homemade Year: The Blessings of Cooking, Crafting, and Coming Together by Jerusalem Jackson Greer (Paraclete Press, $21): This book is a year old, but somehow I missed it. Mommy-blogger Greer (www.jollygoodegal.com), who describes herself as "liturgical convert," combines her love of cooking, crafts and faith. As a fellow mom, crafter and sometimes cook, I am always on the lookout for resources to help my family mark the seasons.

Daring Greatly: How the Courage to Be Vulnerable Transforms the Way We Live, Love, Parent, and Lead by Brené Brown (Gotham, $26): I'm usually not a fan of "self-help" books, but lots of folks I respect are talking about this book. Social work professor and TED Talk speaker Brown writes about the importance of vulnerability for ourselves, our children, our relationships and even our faith lives. Brown is a Christian who returned to church later in life and quotes the likes Franciscan Fr. Richard Rohr. I think this is a message I need to hear.

Shotgun Lovesongs by Nickolas Butler (Thomas Dunne Books, $25.99): No summer reading list would be complete without a novel, and this one is recommended by my colleague Don Phelps as part of Aurora University Library's Books of Summer list. I'm intrigued because this debut novel that follows the friendship of two buddies for two decades is set in small-town Wisconsin, where both my parents grew up. Phelps says it's about "hope, heartbreak, forgiveness and healing."

Column | 10 summer books that are not about Pope Francis

Enemy love is the only way to peace