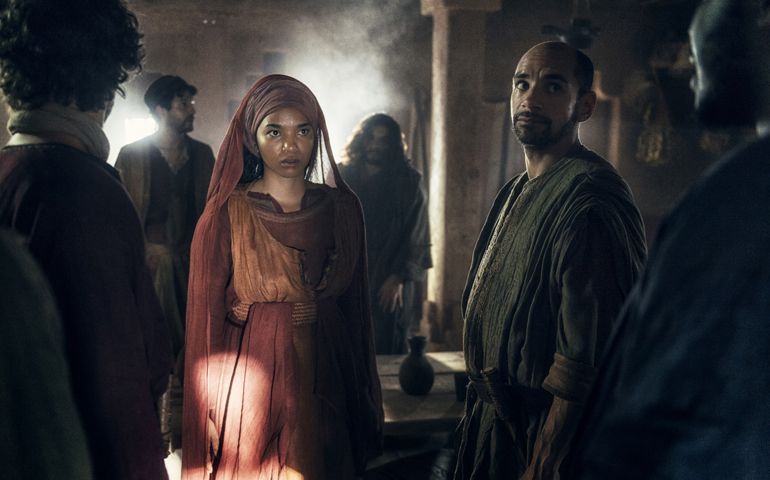 Chipo Chung, center, is Mary Magdalene and Fraser Ayers is Simon the Zealot in the 12-part NBC series "A.D. The Bible Continues." (CNS/NBC)

Washington — Jews from many nations, speaking a wide array of languages, were staying in Jerusalem at the time after Jesus' death, resurrection and ascension when a powerful wind swept in upon a house where his apostles and some others, including his mother, were meeting.

Hearing the wind and curious to know what was happening, these people soon came upon a bewildering scene. They found Jesus' closest followers speaking about God in languages that all in their diverse crowd could understand. How could this be?

Some laughed, assuming the apostles were intoxicated.

These details of the first Christian Pentecost are found in the second chapter of the Acts of the Apostles, the biblical book located immediately after St. John's Gospel. Acts introduces readers to people and events in Christianity's earliest history.

In Acts we witness the stoning of St. Stephen, remembered as Christianity's first martyr (7:54-60). We learn the early Christians shared everything they had; none were needy (4:32-35). And Acts memorably leads us into the Athens Areopagus where St. Paul boldly informs citizens that, without their knowing it, their "unknown God" is the God he proclaims, who "gives to everyone life and breath" (17:23-25).

Compelling as events in Acts are, however, the book represents more than a collection of historical stories. An underlying purpose binds its many parts together.

Thus, no detail of the first Pentecost is unimportant. Particularly noteworthy is that when the wind swept in, "tongues as of fire" appeared and rested on the apostles and those with them; they began speaking "different tongues."

St. Peter set the record straight. "These people are not drunk," he told the crowd. Rather, exalted at God's right hand, Jesus "received the promise of the Holy Spirit from the Father and poured it forth." The crowd was witnessing this outpouring.

The gift of speech that enabled people speaking many languages to understand these followers of Jesus foreshadowed a major development in the early Christian community's mission. Jesus' followers will be called to make Christ known in many nations and cultures.

But agreeing to all that this involved was no small accomplishment for early Christian leaders. After all, proclaiming Christ far and wide meant proclaiming him to gentiles, who were not Jewish.

The ancient Christians' questions about this sound odd today. So it is essential to remember they were Jewish Christians and followed the law of Moses. Would gentile Christians, too, need to follow this law fully?

The process of clarifying that issue underlies the remarkable telling by Acts of the baptism of the Roman centurion Cornelius (10:1-49).

Cornelius was sympathetic toward the Jewish faith but was an uncircumcised gentile. In a vision, however, an angel instructed Cornelius to invite Peter to his home.

Peter made a startling announcement in Cornelius' home. He now realized, he said, "that God shows no partiality. Rather, in every nation whoever fears him and acts uprightly is acceptable to him."

Acts notes that "the circumcised believers" accompanying Peter were astounded to see that day that God's Spirit "poured out on the gentiles also."

The author of Acts makes his underlying purpose clear from the start by recalling Jesus saying to the apostles at his ascension, "You will be my witnesses in Jerusalem ... and to the ends of the earth" (1:8).

Introducing himself, our author reveals that Acts is not his first writing. Earlier he "dealt with all that Jesus did and taught" (1:1). Who is he?

"It is well accepted that St. Luke authored the two-volume work of the Gospel of Luke and Acts," according to Benedictine Fr. Dale Launderville, a Scripture professor at Benedictine-run St. John's University in Collegeville, Minn.

Hellen Mardaga, who teaches Scripture at The Catholic University of America in Washington, agrees. "What Luke has in mind in his double work is to write a salvation history," she said in an interview with Catholic News Service. Acts treats salvation history "after Jesus' return to the Father." It treats "the founding of the early churches."

Launderville said that "in some ways the narrative line" running through Acts is about how "the church spread from Jerusalem to Rome," from one end of the earth to another in the thinking of the times.

Mardaga noted that Acts' first nine chapters focus on "proclaiming God's word in Jerusalem, Judea and Samaria." The "major characters are Peter and the Twelve." But with the conversion in Chapter 9 of Saul, henceforth known as Paul, Acts is about to shift focus to a larger world.

Saul's transforming encounter with the risen Lord occurred in a flash of light as he traveled toward Damascus, intent on seizing Christians. The Lord asked, "Saul, why are you persecuting me?"

Now, as Paul, he will carry the Gospel to far distant places.

Luke, it appears, was often Paul's traveling companion. Even if this cannot be proved, "it is clear that the narrative in Acts presents him this way," Launderville stated.

Luke makes his presence alongside Paul known numerous times in Acts' so-called "we passages." Near the book's conclusion, for example, Luke mentions the decision that "we" should sail to Italy (27:1).

The voyage then undertaken was Paul's fourth missionary journey. It followed a lengthy detention in Caesarea after some Asian Jews objected to his preaching and ministry. Paul appealed to Rome, and a centurion named Julius had custody of him during the voyage.

Sailing toward Italy, Luke describes a violent storm and tells how, once "we" reached safety on an island after suffering shipwreck, "we" learned it was called Malta (27:6-28:1).

Finally, Luke writes about the ultimate moment when "we" arrived in Rome (28:14).

In Rome, a first-century center of power and influence, Paul made it emphatically clear that gentiles would not be excluded from receiving his proclamation of Christ (28:29).

The Middle East: where one catastrophe begets another

A Catholic conscience against the war