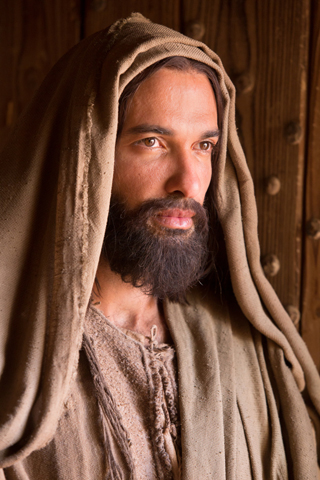 "You got this kind of 'Life of Brian'-esque world you're living in, where on all of our days off, there's 36 disciples sitting around the pool and three Jesuses at the bar," said actor Stephen Moyer, who ditched the fangs from "True Blood" to play Roman governor Pontius Pilate in the Ridley Scott-produced "Killing Jesus."

Based on Fox News host Bill O'Reilly's follow-up to the books he co-wrote with Martin Dugard, "Killing Lincoln" and "Killing Kennedy," "Killing Jesus" tracks the last days of the Christian Messiah. Played by Muslim actor Haaz Sleiman, he is portrayed less as a miracle worker and more as a political threat, and the script heightens the sexual tension between Jesus and follower Mary Magdalene (Klara Issova).

"It plays with the idea that Jesus' teachings are more important than the doing of miracles, that the idea behind what he's saying is the point and it doesn't need to have out-of-body, magical elements happening," Moyer said.

The $12 million production is one of the latest endeavors to give Jesus' crucifixion and resurrection a grittier, more realistic feel -- an approach Mel Gibson's "The Passion of the Christ" introduced in 2004 to earn more than $370.3 million. History's 10-part miniseries "The Bible" took a similar approach in 2013 and drew 13.1 million viewers for its Easter Sunday finale.

Though "The Ten Commandments" and "The Greatest Story Ever Told" have become Easter staples, new faith-oriented entertainment has mostly failed to cross over in recent years, with exceptions in "The Da Vinci Code," "Fireproof" and "The Nativity Story" in the mid-2000s.

But after the success of "The Bible" (and religion-themed films Rentrak says earned $400 million last year, the most since 2006), studios have recognized demand and ordered more, including ABC pilot "Of Kings and Prophets" and TV One's "To Hell and Back" (8 p.m. ET/PT Saturday).

"The Bible" was created by producer Mark Burnett ("Survivor," "The Voice") and his wife, actress Roma Downey ("Touched by an Angel"); they repurposed the series' section on Jesus for a stand-alone feature film "Son of God." It totaled $59.7 million at the box office last spring, thanks in large part to grassroots marketing in churches nationwide.

It's now being followed with an NBC sequel, "A.D. The Bible Continues" (begins 9 p.m. ET/PT Sunday), a 12-episode event that takes, Burnett says, a "Game of Thrones"-approach to the Bible's book of Acts, about the early church after Jesus' resurrection.

With "The Bible," "we didn't make Sunday-school programming. We made stuff that was accurate to the Bible, but realistic, and didn't feel like it had been made on a shoestring budget," Burnett said. "You have to treat every hour of television you're given like a $100 million movie, and with 'A.D.,' we stepped it up even a stage further."

The couple also promoted diversity in "A.D." -- 15 nationalities are represented in the cast, Downey says -- and in their CBS miniseries "The Dovekeepers" (9 p.m. ET/PT Tuesday and Wednesday), led by Chilean actress Cote de Pablo, formerly of NCIS. It's adapted from Alice Hoffman's 2011 historical novel following four Hebrew women during the siege of Masada more than 2,000 years ago. While not explicitly biblical, it incorporates themes of bravery and honor into a desert romance.

"Oftentimes, history is written about men for men, but what's appealing about this story is that it's told through the eyes of these very courageous women," Downey said. "There's such a poignancy to that, and we realize that there's something more important to these people than being taken and being killed -- that their faith and their families came first."

But a spiritual message doesn't always translate to divine success. Last year, "Noah" and "Exodus: Gods and Kings" recruited A-listers for biblical blockbusters but earned just $101 million and $65 million, respectively, though overseas box office was more robust. "Left Behind" ($14 million) and Kirk Cameron's "Saving Christmas" ($2.8 million) didn't have a prayer with audiences or critics, either.

"I don't think Christian audiences, especially younger ones, are going to rush to the theater to support something just because all Christians are supposed to go see it," says S. D. Kelly, a writer for the website Christ and Pop Culture. "Younger audiences want more nuance and are a lot more forgiving of a 'Noah,' and are interested in revisiting [Bible stories]. They almost want to have their faith challenged."

Juan Pablo Di Pace, the Argentine actor who plays Jesus in "A.D.," says, "What's been done in the past has been very textbooky, and it's great to inject doses of fantasy into these things, and creativity."

But the glossy commercialization of the Gospel isn't for everyone.

"It is kind of an uncomfortable bargain for some people, because they really want to support it and they are entertained by it, but it also feels a little over the top in how we tend to think of Scripture," Kelly said.

Others embrace it. The Rev. Ray Johnston, pastor of the multi-campus Bayside Church in the Sacramento, Calif., area, praised Downey and Burnett for the accuracy and meticulous care they brought to "A.D." Like "Son of God," which Bayside rented out an entire theater to watch last year, the congregation is getting behind "A.D." and has collected $100,000 in donations to buy teaching kits for churches that can't afford them.

"For some reason, Christians are known for what they're against and not what they're for," Johnston said. "Anything that triggers conversation about faith and values in America is a really good thing," even if some take liberties with their narratives.

"I tend to feel like, man, if something's worth it, let's get behind it and support it."