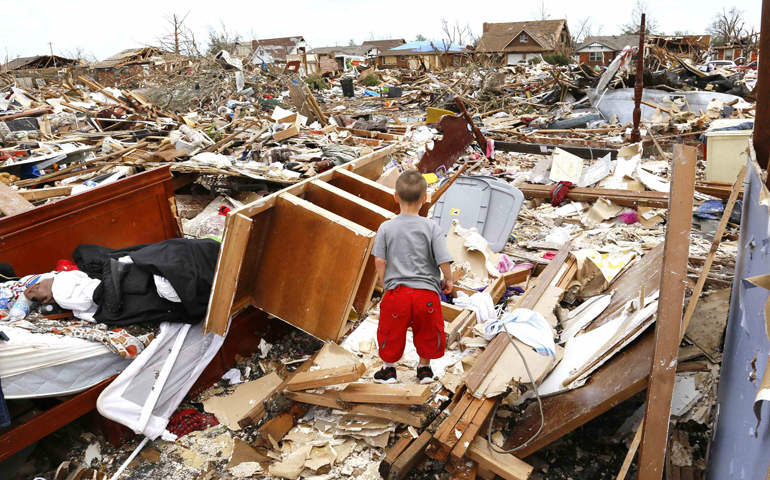 Timothy Stephan, 3, looks for his bed in the rubble of his tornado-destroyed home May 23 in Moore, Okla. The tornado was the strongest in the United States in nearly two years and cut a path of destruction 17 miles long and 1.3 miles wide. (CNS/Reuters/Rick Wilking)

My students often tell me they avoid the news because it's too depressing. Death, destruction, discord -- who needs all that negativity?

Even those of us who know the importance of being well-informed have to admit that too much news consumption can be dangerous to our mental well-being. I gave up the nightly local TV news years ago because its heavy emphasis on crime was making me paranoid. "If it bleeds, it leads" was leading me to believe an attacker was around every corner.

Today, I get most of my news from social media, but it's no less negative. Now, in addition to links to articles about political scandal or hypocrisy, economic injustice, international conflict and war, I also receive "bad news" of a more personal nature. Friends, acquaintances or even friends of friends post, tweet or otherwise share about their own illnesses or struggles or that of their friends or family. And a multitude of advocacy groups fill up my email inbox with appeals to sign petitions or send money to fight every manner of problem, from innocent men on death row to unemployed single moms losing their homes.

How to avoid becoming a Debbie Downer? It's not as simple as turning off the TV at 10 p.m. or canceling your newspaper subscription. Sure, you can try to limit your media consumption, especially the sort of acrimonious so-called commentary that does more to raise your blood pressure than your consciousness.

But checking out -- in essence, put­ting your fingers in your ears -- doesn't seem like the most mature, or the most Christian, response. I have another idea: prayer.

Scripture exhorts us to "pray al­ways," and surely this includes praying in response to what's going on in our broader world. Because prayer is so personal, there is a tendency to re­serve it only for the goings-on in our own lives. But as the world becomes a global village, with news and relation­ships spanning time zones and geo­graphic boundaries, I contend that the content of our prayer must grow, too.

Some parishes already do this more formally by bringing current events into the prayers of the faithful at Mass. The congregation may pray for those affected by war around the world, for our political leaders and for those of the parish who are sick or who have died. We can bring our own personal, but also national and international, concerns to community prayer as well.

But I also have made it a practice to bring prayer to my morning and evening perusal of the news, usually via Facebook. Using author Anne La­mott's formula of Help, Thanks, Wow (the title of her new book), I note the news for which I want to offer prayers of petition, gratitude or praise. Some­times I do this prayer after I've closed my computer; other times I just pray right along as I read.

If this doesn't sound like "real prayer" to you, you're not alone. Some have criticized as shallow the "prayer memes" that have come to inevitably follow national disasters. Is typing #PrayForBoston in your Twitter feed really an act of reverence?

Elizabeth Drescher of Santa Clara University says the new practice of "praying" with a keyboard highlights the current negotiation of religious meaning in public spaces. "It seems to express hope and anxiety, and maybe even helplessness," she told CNN's Belief Blog. "At the same time, it evokes this strong response from people who see it as a cop-out, a way of claiming some kind of spiritual space that doesn't actually have any meaning to the people who are posting the meme or the community they are addressing."

Nonbelievers had an even stronger negative reaction to #PrayForOkla­homa, with actor Ricky Gervais and other atheists starting a counter campaign on Twitter after the deadly early summer tornadoes, using the hashtag #ActuallyDoSomethingForOklahoma.

I don't think it has to be an either-or option; in fact, prayer and action should go together. Prayer is a way of bringing and keeping an intention in your attention, which is likely to lead to the desire and motivation to work for change, healing or growth.

Praying the news also can prevent a despair that leads to loss of hope. News consumption can become an occasion of this sin, if we're not careful. The best way to avoid being overwhelmed and numbed by all the bad news in the world is to stay in contact with the bearer of the good news.