Worshippers' digital distraction may not be all bad 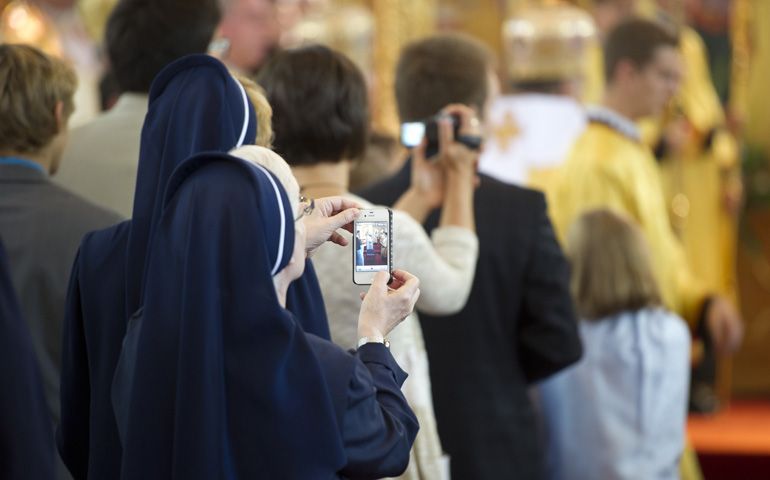 A nun records a video with her phone during the Divine Liturgy at Sts. Volodymyr and Olha Cathedral Sept. 9 in Winnipeg, Manitoba. (CNS/David Lipnowski)

Salt Lake City — Tyler Woolstenhulme might be loath to admit it, but sometimes he's not paying attention in church.

The 31-year-old Mormon has more than once sat in the pew of his congregation in Sandy, Utah, and let his mind wander. When that happens, he pulls out his iPhone and sometimes plays his puzzle game, "1to50." Or maybe he texts his friends across the aisle.

"I take the time in church to catch up with people I haven't contacted in a while," he said. "I text friends or family."

The thing is, he says, about half the congregation also is on phones and tablets during a sermon.

"I see people play games all the time. I've seen them watch football games," he said about other congregants and their mobile devices.

For many bored churchgoers, fiddling with smartphones or computer tablets is the 21st-century equivalent of playing tick-tack-toe or dozing off during services.

It can be a problem particularly with younger members, the first generation to know no life without cellphones or social networks and with whom digital devices are "like an appendage to their body," said Colleen Gudreau, spokeswoman for the Catholic diocese of Salt Lake City. "They don't see it in the same context as the adults do."

Firing up the iPhone or iPad can be especially tempting for Mormons in search of a break, according to some members, possibly due in part to Sunday services that stretch over three hours.

The Church of Jesus Christ of Latter-day Saints has no official policy banning the use of mobile devices during services, according to spokeswoman Ruth Todd.

In fact, LDS mobile apps containing Scriptures, lessons, conference sermons and more can heighten rather than hinder the worship experience.

The devices also can be a godsend for parents wanting to occupy their fidgety children. But sometimes, many can be seen accessing Facebook, checking sports scores, catching up on the news or playing a quick game.

Almost every church has offenders. One Mormon churchgoer was so focused on playing the puzzle game "Candy Crush" on his phone he didn't notice that the worship service was over and everyone had left. Another was playing his racing game on a tablet while grasping and turning the iPad like a steering wheel.

When Kurt Anderson was a member of a Mormon singles ward (congregation), he noticed 60 percent to 80 percent of the churchgoers were on their phones and tablets during a service. Now that he heads his own congregation of older members, he still sees about 10 percent of them on their mobile devices during services.

"It's nothing too terrible," Anderson said, "but there are some moments where you try to corral them in, where you say, 'Let's put the electronic devices down and try to connect as individuals.' "

In some cases, devices have become so distracting that it's normal to remind parishioners before worship services to turn off their mobile units. Some Mormon bishops have mentioned it in their talks. Other churches post signs or remind congregants in their weekly bulletins.

At a Mormon ward in Cottonwood Heights, teen girls began putting their cellphones in a basket before the start of class when texting got out of control. The Westminster Presbyterian Church in Burbank, Calif., even produced a wildly popular YouTube video with more than 3.8 million views that quips if your phone rings during the sermon, "You're going straight to hell."

"A lot of churches have announcements at the beginning that this is a holy time and to please put their devices away. It's like in an airplane," said Samantha Almanza, director of the youth and young adult ministry for the Catholic diocese of Salt Lake City. "It's just time to dedicate to God and not your mobile device, and that's taught to them and reinforced to them."

Now that electronic devices have become so ubiquitous in churches, some clergy want to use them to their advantage.

"I'm actually exploring a service where I would encourage people to Twitter me," said the Rev. Dennis Shaw, pastor at Sandy's Hilltop United Methodist Church. "So as I'm doing the service and I have my cellphone in my hand and the Twitter (feed) changes, I can follow the dialogue. It's a way of potentially engaging people."

The Very Rev. Ray Waldon, dean of Salt Lake City's Episcopal Cathedral Church of St. Mark, recently attended a seminar in San Diego titled "Digital Jesus" in which church leaders were encouraged to get their members tweeting and posting about the sermons during service. He said younger people using social media were referred to as "digital natives" while older churchgoers are known as "digital immigrants."

The LDS church also has embraced the digital age, producing a dozen official mobile apps for phones and tablets that allow members to search Scriptures or prepare Sunday school lessons.

"I see development of technology as the fulfillment of a Judeo-Christian prophecy," said Tracy Cowdell, a regional LDS leader in Sandy.

"Isaiah, who spoke of our time, said: 'The Earth shall be full of the knowledge of the Lord, as the waters cover the sea.' Technology is a way for us to connect with more people and more people having more access to spiritual information."

Culture | Worshippers' digital distraction may not be all bad