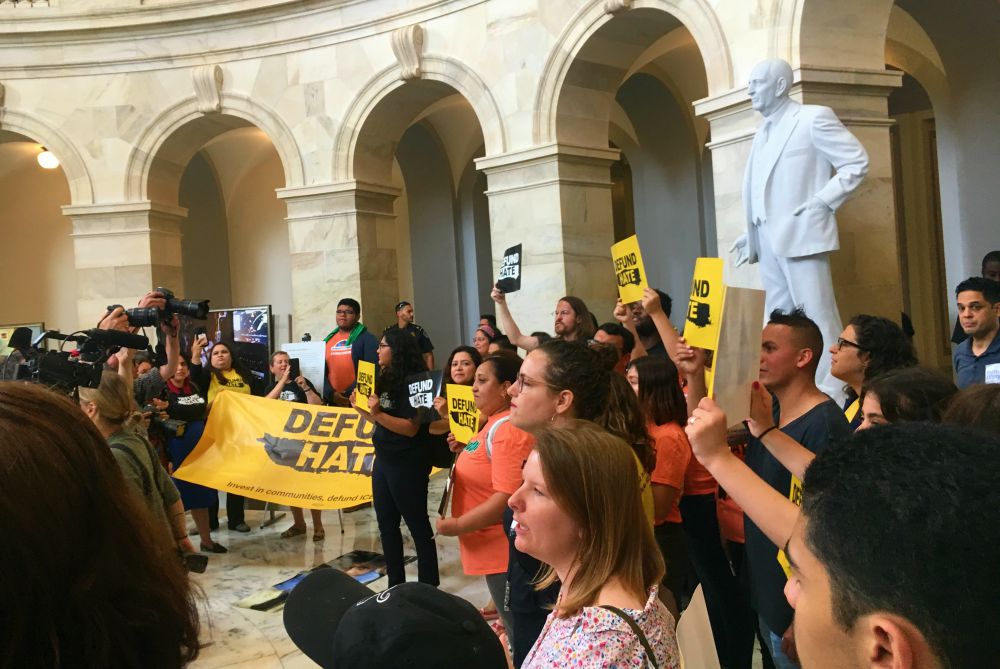 That was the cry of advocates calling for funding cuts to federal immigration agencies during a June 25 demonstration in the Senate Russell Office Building. The rally, organized by the Defund Hate Campaign, took place amid on-going debates in Congress over $4.5 billion of emergency border funding and recent revelations of unsanitary and overcrowded conditions at a Texas border station where children are being detained.

At 11:30 a.m., members of the Defund Hate Campaign filled the Russell Building Rotunda carrying photos of two children who died in Border Patrol custody and banners with the words "Defund ICE and CBP" (Immigration and Customs Enforcement and Customs and Border Patrol). For 10 minutes, dozens of demonstrators chanted and called on their elected officials to stop funding what the campaign's website calls "aggressive immigration enforcement and deadly immigration jails."

The group quietly and peacefully exited the building after Capitol Police issued an arrest warning because they did not have permission to assemble.

"I believe we can do better as a country, and I feel strongly that hopefully our elected officials will hear this and make some change," Silky Shah, executive director of Detention Watch Network, one of the campaign's member organizations, told NCR.

The demonstration came at a pivotal and contentious time in Washington and on the border. On June 21, the New York Times detailed unsafe and unsanitary conditions at a Clint, Texas, Border Patrol station where more than 300 children were being detained. Appearing on CBS' "Face the Nation" on June 23, Vice President Mike Pence responded to the reports by blaming congressional Democrats for delaying "efforts on additional humanitarian support."

On June 22, President Donald Trump announced on Twitter he was delaying planned immigration raids for two weeks to give Congress time to "work out a solution to the Asylum and Loophole problems at the Southern Border." 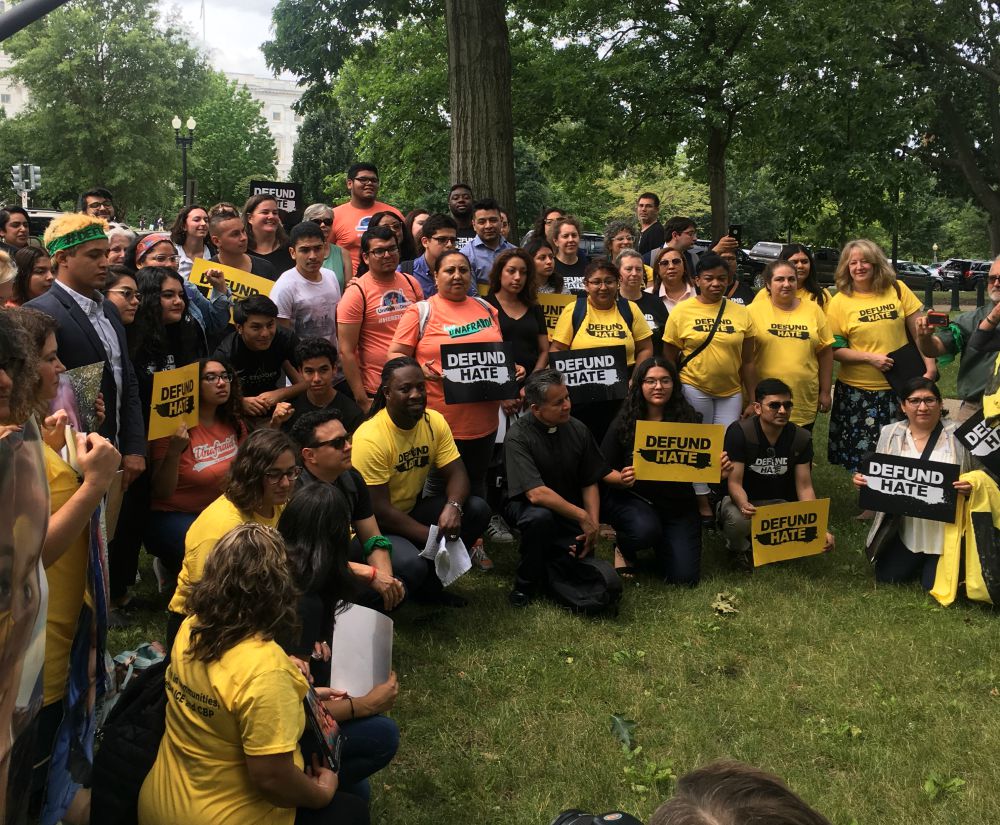 According to the Hill, the House passed a $4.5 billion emergency funding bill June 25 for border operations and humanitarian aid, with votes splitting approximately along party lines. The bill includes restrictions on how funds can be used and conditions for how detained children must be treated. On June 26, the Senate voted down the House bill and instead passed its own emergency funding bill with bipartisan support yet fewer restrictions than the House version.

CNN reported June 26 that House Speaker Nancy Pelosi spoke with Trump about a possible attempt to reconcile the two bills before Congress breaks for Fourth of July recess.

Neither the House nor Senate bill addresses asylum laws.

Shah said that people and organizations from all over the country traveled to Washington, D.C., to participate in the Defund Hate rally and have their voices heard. Participants included members of faith groups like the Sisters of Mercy and recipients of Deferred Action for Childhood Arrivals status who say their parents have been targeted by ICE raids.

"We've been organizing this coalition for the past two-plus years, and in the process of those two years, we have been successful in preventing about $7.2 billion of additional money going to ICE and CBP, but we still haven't seen defunding happen," Shah said.

Since the Trump administration took office in 2016, funding for ICE and Border Patrol has skyrocketed, Shah said. Although over 100 members of Congress have called for spending cuts, Shah said that has not yet translated into the bills, and Congress continues to "bail out" these agencies when they overspend.

According to the campaign's website, the coalition would prefer their tax dollars be used to "strengthen our communities by investing in education, housing, and health care programs that increase well-being, not bankroll xenophobic policies"

When asked to respond to the Trump administration's claim that the billions in emergency funding is needed to provide better conditions for detained children, Shah said that was not true.

"Claiming that they don't have the resources for diapers and other sanitary products that these kids need — that's a lie. Flat out," she said. "And what really is happening is we're seeing this administration use immigrants as a political bargaining point, so all the stuff that they're doing right now is manufactured by themselves."

A version of this story appeared in the July 12-25, 2019 print issue under the headline: Activists want enforcement defunded.