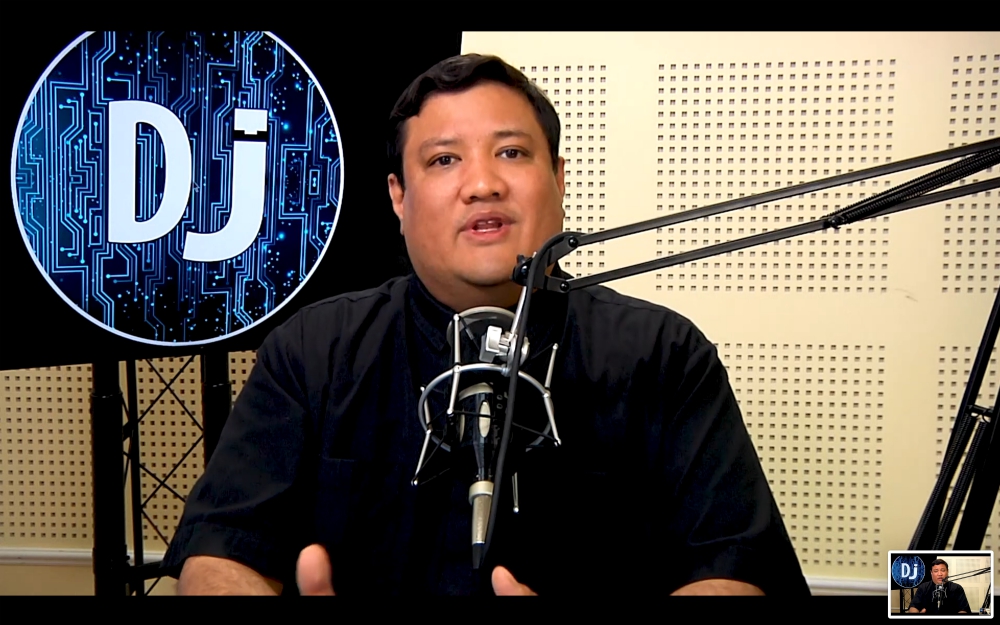 Jesuit Fr. Robert Ballecer in a March 16 YouTube video recorded at his studio at the Vatican (Screenshot)

Fr. Robert Ballecer, a 45-year-old priest who has been quarantined with the Jesuit Curia in the Vatican for two months, admits his Italian is not great. But he knows right away when the emails come in alerting the Curia to the death of another Jesuit somewhere in the world.

"Those first couple of lines as I'm doing the translations, and I'm thinking, 'Oh no, it's one of those. I can't take another one of these,' " he said during an interview in April.

Asked if the 45 men who make up the Jesuit Curia are practicing social distancing, Ballecer said they are trying to do so but adds: "It's not practical to expect a house of almost 50 Jesuits who have to use certain common areas at the same time [to observe strict social distancing all the time]. We have to use our best judgment on how that works. Like, for example, at table, we normally have five per table. Now, we have three per table because it keeps us about six feet away from each other."

Most of the Jesuits are celebrating Mass on their own now, he said. They're not doing a large celebration because even though they should be safe after being locked down inside this house for two months, "We still feel the need to model good behavior."

Ballecer said that people from the outside world do come in to the Curia every once in a while, but there is an awareness that visitors could at any time introduce COVID-19 into the house. He said the Curia has a very strict set of protocols if someone is feeling sick. What he referred to as a "hard quarantine" is implemented and the individual is sent to a special part of the house where nobody interacts with them.

"You basically take care of yourself until you either need medical assistance or your two weeks are done," he explained.

Ballecer described 40 of the 45 Jesuits in the Curia as introverts and referred to 10 of them, including himself, as extreme introverts. The five extroverts, he said, are "climbing the walls and they're finding any excuse to interact with people. This is a strange family that I live in."

"I honestly don't have a problem staying indoors," he said. "I'm OK with it. I have no problem staying in my room. I've got everything. The one thing that I do miss is when I could still walk outside, I was getting exercise and I'm getting no exercise, which is a problem." 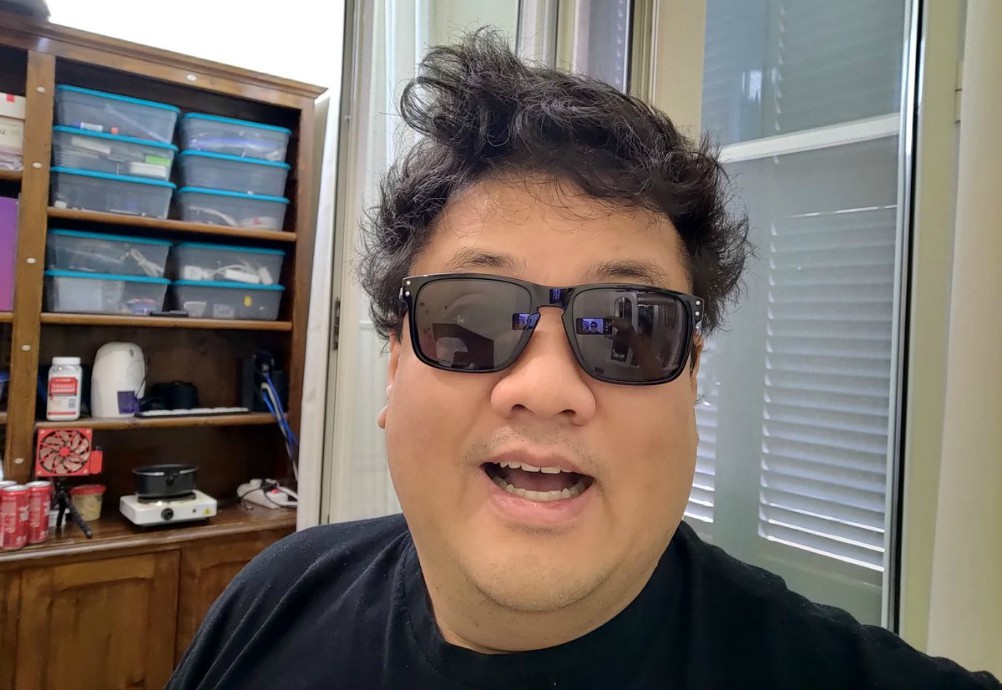 Others in the Curia are walking back and forth in the hallways. A schedule has been worked out so that individuals have a set time to walk and others are expected to stay out of the hallway. Some Jesuits go running on the roof and residents on the floor below are alerted that they're going to be hearing pounding footsteps on their ceiling.

Ballecer has been stationed in Rome since mid-2018 when he left his home at St. Ignatius College Prep, a Jesuit high school in San Francisco. He'd been working as a host and producer at TWiT, a technology podcast network based in Petaluma, California, north of San Francisco, when he was asked to spend two months in Rome as part of the multinational communications team convened for the election of the Jesuits' new father general. After returning to California, Ballecer was ordered back to Rome permanently.

Although his LinkedIn account lists Ballecer's title as assistant for new evangelization, he said he was initially tasked with setting up a video studio at the Vatican. He ended up assembling three of them, mostly with equipment he brought with him from San Francisco.

A self-described mechanic, engineer and electrician who salvaged discarded computers by dumpster diving as a teenager growing up in Silicon Valley, Ballecer is widely admired in the world of tech journalism for his technical prowess. None of his former podcast pals was terribly surprised to hear that last December he set up a server in the Vatican for the wildly popular video game Minecraft in which players can build block-like 3D structures.

The server initially sat in a room next to a room of relics of saints, which Ballecer said was an appropriate metaphor for his work.

"I've got the very old and the very new and they live in the same place," he said.

Asked if a video game amounted to a spiritual endeavor, Ballecer replied: "When you create, when you make something that didn't exist before, when you really indulge your imagination, that is a spiritual experience. That's a religious experience. Someone built the Vatican in the Minecraft server and that was amazing. To see people working together for a common good can be incredible and grace-filled and relationship-building if we approach it the right way."

According to Ballecer, Bishop Paul Tighe, secretary of the Pontifical Council for Culture, thought the Minecraft server was a great idea. And Ballecer said Pope Francis actually saw it.

Ballecer said that when Francis visits the Jesuit Curia, "we try not to make it be about business. We really do because he is a brother Jesuit. He may be the pope, he's the Holy Father, but we try to make him feel welcome. And so if he comes to the house and there are 45 guys who all want to push their projects at him, then it's business, it's not community, it's not family and every time he comes here we try to make it so that it's family."

Ballecer, who has a drone in his possession in the Curia, is also something of a hacker. He has been a regular at Def Con in Las Vegas and other hacker conventions over the years. He admits to employing some old-school hacking techniques in the Vatican to gain access to cooking facilities. (The priests are not permitted to cook in the large industrial kitchen that serves the order and are only allowed to use microwave ovens for themselves.) Exploring the six-story building with 200-yard long hallways, Ballecer uncovered security deficiencies that gave him access to smaller kitchens in the building.

"I do have a healthy sense of curiosity," he said.

His curiosity led him to doors left ajar, doors that could be jimmied and doors with hinges that are facing the wrong way. Once inside these kitchens, he made traditional Filipino meals, including chicken adobo, the tangy, marinated national dish of the Philippines; a stir-fried noodle dish called pancit; and kare-kare, an oxtail stew with peanut sauce.

Eventually, Ballecer said, he revealed the building's security shortcomings to his superiors and then directed them to some YouTube videos by a security expert known as Deviant Ollam, another regular at Def Con. The security deficiencies, Ballecer said, were subsequently rectified.

Ballecer also has his own YouTube channel, which is consistent with his effort to brand himself as the Digital Jesuit. His most recent episode focused on how to do a webcast in this time of sheltering in place. He has a little more than 5,000 subscribers but he has a greater impact on Twitter, where he has 25,800 followers.

Ballecer said the vast majority of his Twitter followers know him via the TWiT podcast network. He has a lively Twitter feed and his followers, he said, are constantly engaging with him.

During his days working at TWiT, Ballecer encountered some hostile feedback from trolls. That motivated him to design a bot that grades people who interact with his Twitter account. The bot blocks those it thinks are bullies or too aggressive.

"There are a lot of people out there who do not think that a priest should do X or should believe Y," said Ballecer. "I understand that, but at the same time I will not shy away from it. I'm not afraid to express myself."

On April 22, he tweeted about the Republican Party in Wisconsin:

The @wisgop used a Supreme court majority to force their citizens to stand in voting lines during a pandemic.

Now they're suing @GovEvers from keeping people safe at home.
...

Tell me again that the @GOP is the party of life.

The following day, he tweeted:

Trump has been wrong about COVID-19.

And yet the MAGAfolk continue to believe his "gut feeling" over what medical experts have been telling him for months.

He is not trying to get us killed.

"I always explain why I post the things I do," said Ballecer. "I leave it for people to judge for themselves."

Asked if he has been taken to task for his outspoken criticism of the Trump administration's handling of the pandemic, Ballecer replied: "They know that if I am posting something, I have something to back it up. That's why I've been giving such a free hand because for everything that I've posted there's always evidence. I don't make stuff up. I don't engage in rumor mills."

What words of hope does he have during this terrible time?

[Manhattan-based radio journalist Jon Kalish has reported for NPR since 1980. His newspaper articles, radio docs, podcasts and NPR stories are at kalish.nyc.]