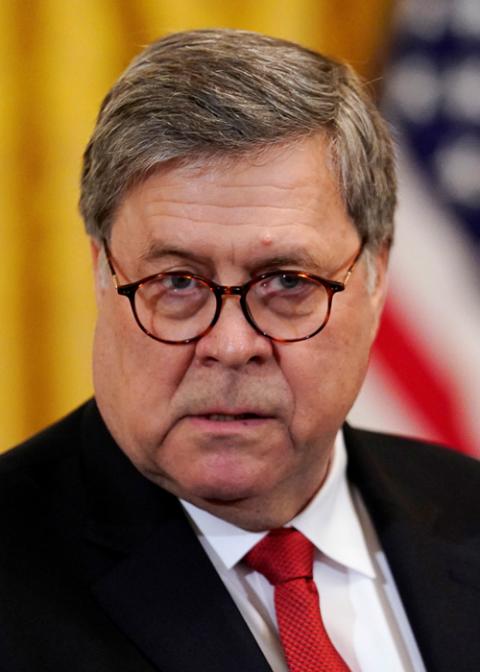 U.S. Attorney General William Barr is seen at the 2019 Prison Reform Summit in the East Room of the White House in Washington April 1. (CNS/Yuri Gripas, Reuters)

At U.S. Catholic Stephen Schneck explains that even though Catholics should disagree profoundly with Attorney General William Barr's decision to start federal executions again, Catholics on the left should not ape Catholics on the right in urging he be denied holy Communion. Consistency is not desirable if it means behaving as badly as the other side.

At Commonweal, Jesuit Fr. John O'Malley poses and answers the question: Does Church Teaching change? The historian of Trent, Vatican I and Vatican II shows that, yes, Virginia, there is development of doctrine but those developing it tend to insist that nothing is changing, even and especially while they are making significant changes. Does this mean that church teaching is swimming in relativism? Of course not. It means that doctrine is like a diamond, with many facets, and different ages are as different kinds of light shining through the diamond. Sometimes, too, in order to stay true to itself, doctrine wears a different aspect in a different temporal, cultural milieu.

In The Washington Post, Rob Stutzman, a Republican strategist in Sacramento, California, argues that Sen. Kamala Harris has to "find a higher gear" if she is to make a real play for the Democratic presidential nomination. Commenting on some recent interviews, he aptly concludes: "There is a sense that Harris, a former prosecutor, is excellent at asking questions but not always so sure-footed when answering them." I think the problem is deeper: I think she has become too much a creature of her media trainers.

Also in the Post a report on troll farms in the Philippines. I am opposed to internet trolling almost always, but last week we were treated to a delightful episode when Brisbane Archbishop Mark Coleridge trolled Tyler Bishop Joseph Strickland after Strickland misidentified Pope Pius XI's encyclical on chaste wedlock. After Strickland informs us about chaste canine wedlock, I look forward to him opining on Pope St. John XXXIII's seminal encyclicals Pacing on the Terrace and Mater Ate Magistra, as well as Pope St. Paul VI's apostolic exhortation Evangelicals and Nuncios.

We know that in the face of gun violence and mass shootings, thoughts and prayers are not enough, but according to Fr. Jerry Pokorsky, writing at CatholicCulture.org, if we were to pray for sexual purity, that might be the ticket to stopping all the shooting. This is the thing that I find most reliable about some of our friends on the Catholic right: Just when you think they have gotten about as strange as strange can get, they take it one step further.

One of the more regrettable facts of life in 2019 is that we are forced to read articles about Jordan Peterson now that Bishop Robert Barron has chosen him as a model for cultural engagement. This article at National Interest by Tara Isabella Burton demonstrates that Peterson is part of neo-paganism that makes Barron's fascination even more strange. And, stranger still? Burton highlights the role of fantasy bodybuilders in some of this atavistic neo-pagan bunk. You couldn't make this stuff up.

Our friends at the International Labor Recruitment Working Group have published a report about how employers use the J-1 Summer Work Travel visa to exploit young people. If you ever wondered why so many of shops on Cape Cod or along the Jersey shore are now staffed by Eastern European students, now you know: These young people know they don't dare complain about how they are being treated, and they cost the company a lot less than a U.S. worker would.