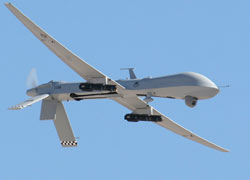 American drone aircraft fired 18 missiles at militants in Pakistan’s North Waziristan tribal region [May 11], killing at least 14 fighters and wounding 4, a security official and a resident of the area said. … The unusually intense drone attack was the third since a failed car bombing in Times Square 10 days ago.
--"Drone Strikes Pound West Pakistan," By JANE PERLEZ and PIR ZUBAIR SHAH, The New York Times, May 11, 2010

Islamabad, Pakistan -- On May 12, the day after two U.S. drone strikes killed 24 people in Pakistan’s North Waziristan, two men from the area agreed to tell us their perspective as eyewitnesses of previous drone strikes.

One is a journalist, Safdar Dawar, general secretary of the Tribal Union of Journalists. Journalists are operating under very difficult circumstances in the area, pressured by both militant groups and the Pakistani government. Six of his colleagues have been killed while reporting in North and South Waziristan. The other man, who asked us not to disclose his name, is from Miranshah city, the epicenter of North Waziristan. He works with the locally based Waziristan Relief Agency, a group of people committed to helping the victims of drone attacks and military actions.

“If people need blood or medicine or have to go to Peshawar or some other hospital,” said the social worker, “I’m known for helping them. I also try to arrange funds and contributions.”

Both men emphasized that Pakistan’s government has only a trivial presence in the area. Survivors of drone attacks receive no compensation, and neither the military nor the government investigate consequences of the drone attacks.

In U.S. newspapers, reports on drone attacks often amount to about a dozen words, naming the place and an estimated number of militants killed. The journalist and social worker from North Waziristan asked us why people in the United States don’t ask to know more.

It’s hard to slow down and look at horrifying realities. Jane Mayer, writing for The New Yorker, (“The Predator War,” October 26, 2009), quoted a former C.I.A. official’s description of a drone attack:

“People who have seen an air strike live on a monitor described it as both awe-inspiring and horrifying. ‘You could see these little figures scurrying, and the explosion going off, and when the smoke cleared there was just rubble and charred stuff,’ a former C.I.A. officer who was based in Afghanistan after September 11th says of one attack.”

“Human beings running for cover are such a common sight,” Jane Mayer continues, “that they have inspired a slang term: ‘squirters.’”

The social worker recalled arriving at a home that was hit, in Miranshah, at about 9 p.m., close to one year ago. The house was beside a matchbox factory, near the degree college. The drone strike had killed three people. Their bodies, carbonized, were fully burned. They could only be identified by their legs and hands. One body was still on fire when he reached there. Then he learned that the charred and mutilated corpses were relatives of his who lived in his village, two men and a boy aged seven or eight. They couldn’t pick up the charred parts in one piece. Finding scraps of plastic they transported the body parts away from the site. Three to four others joined in to help cover the bodies in plastic and carry them to the morgue.

But these volunteers and nearby onlookers were attacked by another drone strike, 15 minutes after the initial one. Six more people died. One of them was the brother of the man killed in the initial strike.

The social worker says that people are now afraid to help when a drone strike occurs because they fear a similar fate from a second attack. People will wait several hours after an attack just to be sure. Meanwhile, some lives will be lost that possibly could have been saved.

The social worker also told us that pressure from the explosion, when a drone-fired missile or bomb hits, can send bystanders flying through the air. Some are injured when their bodies hit walls or stone, causing fractures and brain injuries.

The social worker described four more cases in which he had been involved with immediate relief work, following a drone attack. He didn’t supply us with exact dates, and we weren’t able to find news articles on the Internet which exactly matched his accounts. Riaz Khan, an Associaate Press reporter covering a drone strike May 15, noted differences in details reported by witnesses and official sources. “Such discrepancies are common and are rarely reconciled,” according to Khan (May 15, “Officials: US missiles kill 5 in NW Pakistan”) http://news.yahoo.com/s/ap/20100515/ap_on_re_as/as_pakistan

Exasperated by the neglect and indifference people in Waziristan face, especially those who say they have nowhere to hide, the journalist and social worker began firing questions at us.

“If the U.S. had good intelligence and they hit their targets with the first strike,” Safdar asks, “why would the second one be necessary? If you already hit the supposed militant target, then why fire again?”

“Who has given the license to kill and in what court? Who has declared that they can hit anyone they like?”

“How many ‘high level targets’ could there possibly be?”

“What kind of democracy is America,” Safdar asks, “where people do not ask these questions?”

Reliance on robotic warfare has escalated, from the Bush to the Obama administrations, with very little significant public debate. More than ever before, it is true that the United States doesn’t want our bodies to be part of warfare; there’s also not much interest in our consent. All that is required is our money.

But, you get what you pay for in the U.S.A. The social worker and the journalist assured us that all of the survivors feel hatred toward the United States. “It is a real problem,” said Safdar, “this rising hatred.”