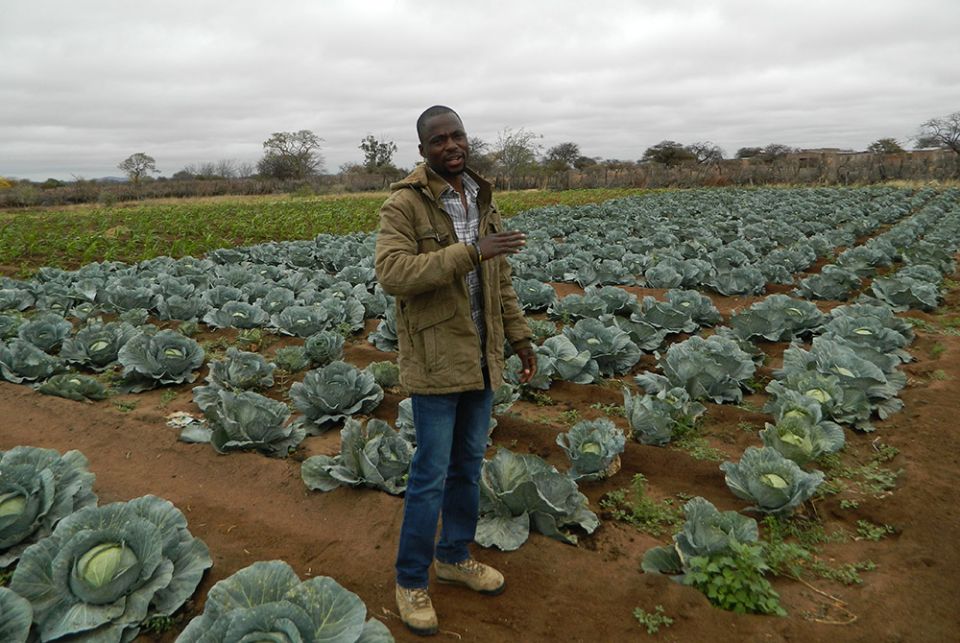 Oscar Singo stands in the field of cabbages he grows to feed his livestock, a technique he learned at a Catholic Church-run farmer training center. (Tawanda Karombo)

Bulawayo, Zimbabwe — In the sweltering mid-October heat of Matobo, one of Zimbabwe's hottest and driest districts, Spiwe Moyo tended her ripening tomato crop. Nearby, underneath a baobab tree, a few emaciated donkeys and a small herd of skinny cattle take shelter from the blazing sun.

Along with the onions, vegetables and green beans grown by other communal farmers as part of the Evergreen Community Market Garden, Moyo's tomato crop is a virtual oasis of green, surrounded by bare red soil that receives little shade from the sparse leaves of the mopani trees and a few patches of dry grass long desolated by the high temperatures.

Despite the punishing heat, unfriendly surroundings and daily struggles for water for humans and domestic animals, she beamed a smile when she spoke of the prospects for her crop, which will ripen in the next week or so.

"I am just weeding out the crop and inspecting for pests and other diseases, because in this hot weather, crops can suddenly suffer diseases or pest attacks. We only water the crops in the morning or evening, to conserve the water," Moyo told EarthBeat in an interview at the garden.

The water comes from a solar-powered well funded by Catholic Church organizations. Without it, she says, "there would be no green crops to talk about, as the rains are not sufficient."

There has been practically no rain in the past two years in this arid part of Matebeleland South province, in southwestern Zimbabwe. This year, however, rains came suddenly, a month earlier than expected. Experts say that is one of the uncertainties caused by climate change, and it has combined with other climate-related disasters that have made food scarce in southern Africa.

Climate change has caused as many as 86 million people across sub-Saharan Africa to migrate from their land, according to a September UNICEF report. And drought and climate change are creating critical food scarcity for more than 11 million people in nine southern African countries, the report says.

In an effort to head off water wars and help farmers adapt to the changing climate, various Catholic agencies, including the Irish aid agency Trócaire, Britain's Catholic Agency for Overseas Development, or CAFOD, and Catholic Relief Services, the U.S. bishops' aid and development agency, are funding agro-ecology learning centers and solar-powered community wells in southern African countries, including Zimbabwe, Malawi and Zambia. 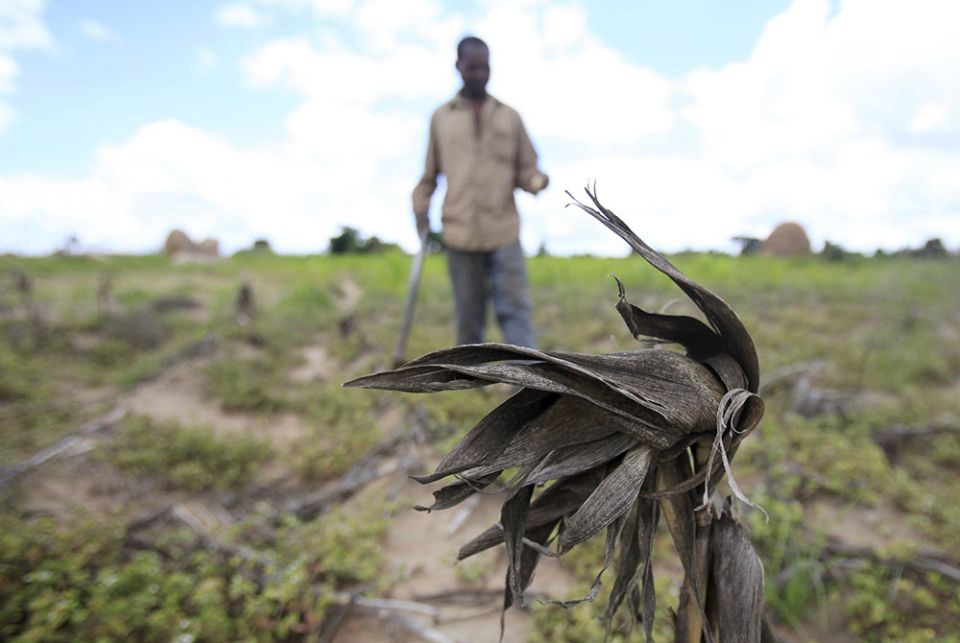 A Zimbabwean man walks through his drought-affected corn field outside Harare Jan. 20. With poverty on the rise and a drought compounding Zimbabwe's problems, people are struggling to make ends meet, and the poor are becoming poorer, church workers said. (CNS/Philimon Bulawayo, Reuters)

At the centers, which blend sustainable agriculture techniques with indigenous farming practices, local farmers learn skills such as contour plowing, drip irrigation and organic pest control, as well as practices such as "intercropping," or combining multiple crops in one plot.

As a result, communal oases of green are appearing in various areas, as "model" farmers share their new knowledge with their neighbors.

"The seasons are changing and we are seeing the impact of climate change, because we usually have the first showers in August and at the end of October we then get the first planting rains. But in the last two years, there have basically been no rains here," said Felix Ncube, who is a member of the management committee of St. Joseph's Agro-Ecological Center in Matopos.

Committee members run the learning center and also train other people in the community, passing along their new knowledge to other farmers.

The problems related to climate change are worsened by unemployment and food insecurity, Ncube said. Although Caritas and the World Food Program assist the community with relief kits, they distribute aid only to the elderly, leaving younger people desperate, he said.

"The youths here have nothing to do to feed themselves or take care of their families, so they end up cutting down trees as a source of energy [for brick-making kilns], and this is contributing to the arid conditions in the area," he said.

Because deforestation can affect local rainfall, the Catholic groups working with farmers hope that slowing the loss of tree cover will also help ease some of those conditions.

Competition for farmland and demand for charcoal both lead to deforestation. In Zambia, the Mother Earth Center, a sustainable farming project run by Comboni Sisters, encourages farmers to reforest their land.

The center trains farmers to combine agriculture with forestry, as a means of diversifying the tree and plant cover on their farms. This helps promote preservation of native tree species and also makes the farmers better prepared to withstand drought and floods.

Because of the high cost of electricity, charcoal is commonly used for cooking and heating in low- and middle-income households, even in cities, Sr. Annes James, who runs the Mother Earth Center, told EarthBeat in an email.

"Little or no investment seems to be made fast enough in the area of solar energy, despite the abundant sunshine enjoyed in these parts all year-round," she said.

In Zambia, the drying and shifting flows of rivers are evidence that the effects of climate change are already at play in the region, Jesuit Fr. Andrew Simpasa, director of the Kasisi Agriculture Training Center in Lusaka, Zambia, told EarthBeat.

As seasons change and water sources dry up, disputes over access to water access are emerging and are projected to worsen.

"In Zambia, the Chongwe and Ngwerere Rivers, which were once a catchment area for providing irrigation water for farms located on the eastern side of Lusaka city, have now become perennial rivers," Simpasa said.

"This has caused water access disputes between commercial farmers, who have the machinery and equipment to domesticate the water, and small-scale farmers who struggle to access irrigation water during the dry season," he added.

In Zimbabwe, Gwinyai Chibaira, agri-livelihoods project manager for Catholic Relief Services in Zimbabwe, has seen successive droughts and floods wipe out farmers' crops. Even so, when the agency launched an agricultural training center in 2013 in Beitbridge, near the border with South Africa, only four farmers signed up, he said.

Now about 100 households have participated in the training programs, learning to grow fodder for livestock such as cattle and goats. They can then sell the animals to support their families and reinvest in their farms.

Oscar Singo, 36, has gone a step further. Besides growing fodder and cabbages for his herd of cattle, he buys animals from others and fattens them before auctioning them off.

Timothy Ngulube, a 60-year-old livestock farmer in Fula, a village near Beitbridge, hopes to earn enough to install his own solar pump to irrigate the fields where he grows crops to feed his animals on his landholding of less than four acres.

"I used to grow tomatoes and maize," he said, "but it is getting dryer and hotter here, hence I have to focus on livestock, which is resilient to these dry weather patterns."

[Tawanda Karombo is a journalist based in Harare, Zimbabwe, who specializes in sub-Saharan Africa, covering climate, environment, health, economics and all things Catholic in southern Africa. Contact him at tawakarombo@yahoo.co.uk and follow him on Twitter at @tawakarombo.]