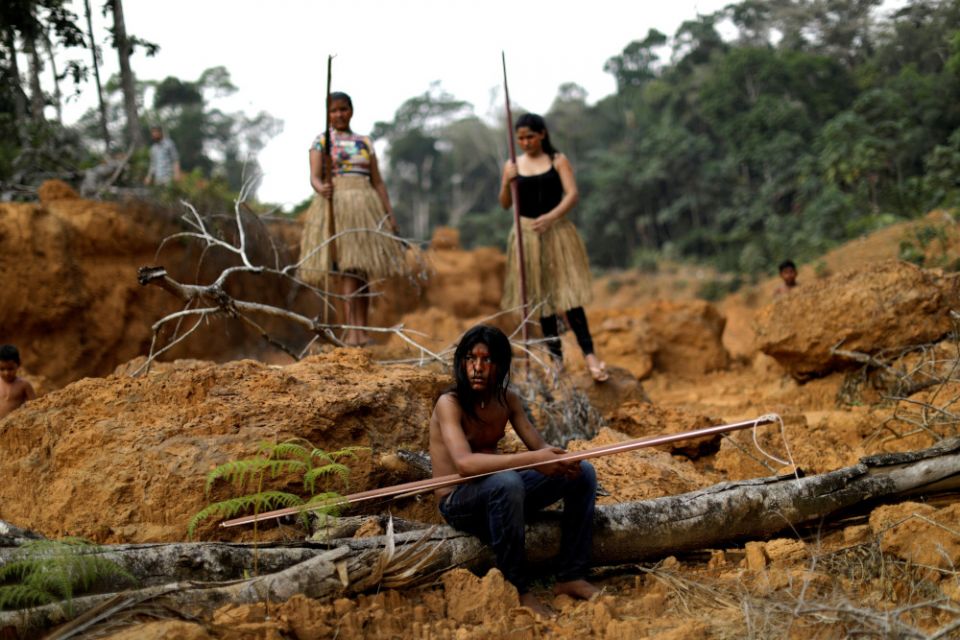 Young people from the Mura tribe are pictured in a file photo at a deforested area in unmarked Indigenous lands inside the Amazon rainforest near Humaita, Brazil. Bishops working in the Amazon are opposing a bill they say threatens Brazil's rainforest by allowing illegally deforested federal lands to become private holdings. (CNS photo/Reuters/Ueslei Marcelino)

SAO PAULO, Brazil — More than 60 Brazilian bishops who work in the Amazon presented the Brazilian Senate with a letter recommending that the country's upper house withdraw a bill because it threatens extensive damage to public forests and traditional populations.

"Land grabbing is responsible for one-third of deforestation in Brazil, in addition to promoting violence," said the bishops, adding, "the approval of such a project would benefit large land invaders and speculators."

The bishops said the bill, if passed, may "further intensify conflicts in the field and increase the demand for land."

The discussion in Brazil's Senate in early May came just days after Brazil's federal government declared its intentions to preserve the Amazon at the International Climate Summit convened by the U.S.

"The eyes of the world are watching Brazil's environmental policy; we run the risk of passing yet another law against the care and environmental safeguard projects," the bishops warned.

They noted the 2019 Synod of Bishops for the Amazon placed the church as one of the main institutions in defense of the Amazon and its peoples.

"The church in the Amazon, guided by the principles of the Gospel and inspired by Pope Francis' encyclical 'Laudato Si',' and from the perspective of integral ecology, seeks to dialogue with society for the defense of the interests of the poorest, social justice and preservation of the environment," the bishops said.

For Cecilia Iorio, Brazil country representative for CAFOD, the Catholic aid agency for England and Wales, "It's hard to imagine that the change in the current legislation won't be seen as a stimulus to more deforestation and land grabbing."

"In the past two years, under (President Jair) Bolsonaro's leadership, deforestation has reached the highest levels for 12 years. We know that we can't delay tackling the current climate crisis. This is a moment for all governments, public and private sectors to demonstrate commitment to the Paris Agreement," Iorio said in a statement.