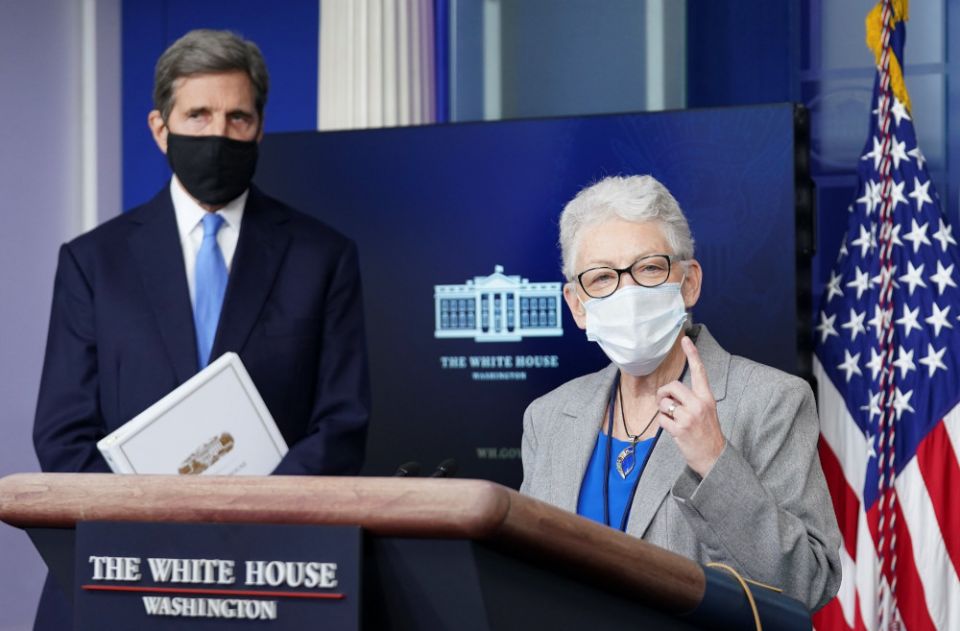 Editor's note: This story originally appeared in Reuters and is republished here as part of Covering Climate Now, a global journalism collaboration strengthening coverage of the climate story.

John Kerry and Gina McCarthy worked together under former President Barack Obama, when Kerry served as secretary of state and McCarthy led the Environmental Protection Agency.

Now their mission is more targeted.

The two must deliver in the coming days a new, ambitious pledge to reduce U.S. greenhouse gas emissions and win back trust from foreign allies after former President Donald Trump pulled the country from the 2015 Paris Agreement on climate change.

The pledge, known as a Nationally Determined Contribution or NDC, will be released ahead of a U.S.-led climate summit with world leaders on April 22-23, Biden's first major foray into climate talks since re-entering the Paris accord.

"The NDC ... is a critical component of our currency abroad," Kerry told Reuters in an interview when he started his new job as international climate envoy.

The White House declined to give details about the makeup of the plan, but sources familiar with the process expect a pledge to cut U.S. emissions by around 50% by 2030 from 2005 levels – perhaps in a range of 49% to 53%.

McCarthy, who as Biden's domestic climate adviser has the responsibility for spearheading the effort, has been working for months to set the emissions goal and a strategy to implement it, while Kerry has been pressing other countries to set ambitious targets of their own.

"Kerry's been very clear with Gina that if it doesn't have a 5 in front of the number, it's a non-starter in the international community," one source familiar with the issue said.

That target would hew to the world’s goal of halving global emissions by 2030 and reaching net-zero by 2050 in order to hold global temperatures from rising 1.5 degrees Celsius above preindustrial levels.

Kerry said he and McCarthy would engage with lawmakers to bring legislative aspects of the plan to fruition.

With Kerry on a world tour this month to persuade China and other large emitters to increase their own pledges, McCarthy has been working with a small team to bring U.S. industries and the American public on board.

Biden's credibility at home is also at stake. The president has made fighting climate change a top domestic priority, and his support among progressive voters will depend in part on the plan McCarthy can help deliver.

At the same time, the plan needs enough teeth to last beyond Biden’s time in office, even if he serves a second four-year term, so that it cannot be changed easily by a successor who may not share Biden's views.

A White House official emphasized this week what Biden's aides often say: the team is taking a “whole-of-government” approach, relying on different agencies to help bring down emissions in the sectors they oversee.

"We're not ruling out any tool," McCarthy told Reuters in an interview earlier this year, listing legislation and regulation as key options to reach the target.

In fact, the Biden administration has already set its climate plans in motion – unveiling a $2 trillion infrastructure package in March that includes investments in renewable energy and clean transportation. Democrats aim to pass the bill by July, but it faces resistance from Republicans over tax increases embedded in the legislation.

McCarthy’s "biggest challenge is to make sure that the agencies are hitting their marks, but she also has to ensure, working with the rest of the team in the White House, that the Congress passes those investments," said John Podesta, a former climate adviser to Obama.

Biden has been restoring environmental rules scrapped under Trump, while U.S. officials make frequent media appearances to sell the administration’s vision of a green economic recovery and job creation to the American public.

But the impact of McCarthy’s work extends beyond U.S. borders, where a weak U.S. plan would undercut Kerry’s push for stronger climate action by the rest of the world.

"Our ability to project, internationally, the leadership that is so sorely needed depends on our ability to deliver domestically," said Ali Zaidi, McCarthy's deputy.

Kerry’s international climate efforts have been helped by his hard-earned stature in diplomatic circles. Aside from serving as Obama’s secretary of state, he had a long career as a U.S. senator and was the Democrats’ 2004 presidential nominee.

His job in the Biden administration gave Kerry a seat at the diplomatic table once again at the conclusion of his career. But the tall, globe-trotting Kerry has had to tow a tricky line in wooing foreign leaders, while being careful not to step on current Secretary of State Antony Blinken’s toes.

"As a former secretary, he knows he needs to stay in his lane, and I think he will,” Podesta said. Kerry would "have access not to the energy or the environment ministers, but to heads of state or heads of government, and ... that's a good thing."

Kerry, when he is in town, has office space in the Eisenhower Executive Office Building next to the White House and at the State Department, his former stomping grounds, where he has a sizable staff.

McCarthy works from an office in the lower level of the White House's West Wing – good real estate for its proximity to the president. She was serving her first year as president of the Natural Resources Defense Council when, with encouragement from Kerry, she agreed to go back into government.

The two have a shared love of the Boston Red Sox baseball team, and Kerry quipped that McCarthy has a "better" Boston accent. On climate, she remains focused on the domestic challenges while he handles diplomacy.

"John Kerry is more of the internationalist diplomat. That's what he loves, that's what he's done,” said Christine Todd Whitman, a former EPA administrator under Republican President George W. Bush. “And if not president, then that's a pretty good place to be."

She noted that Kerry and McCarthy have “very different personalities.”