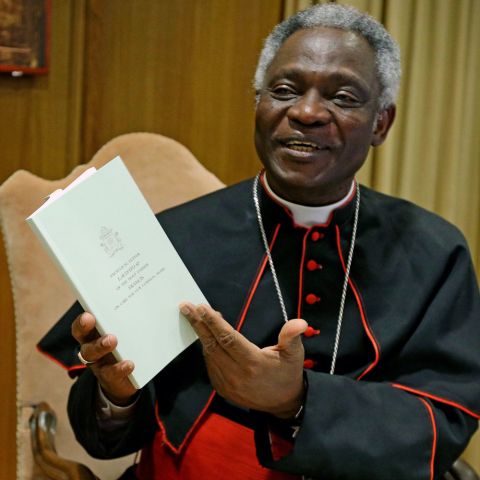 Cardinal Peter Turkson, prefect of the Dicastery for Promoting Integral Human Development, holds a copy of Pope Francis's encyclical on the environment, "Laudato Si,'" during its release in 2015 at the Vatican. (CNS/Alessandro Di Meo, EPA)

Accra, Ghana — A top Vatican official urged young people at a local World Youth Day gathering to protect the planet and actively live the teachings of Pope Francis' encyclical on the environment.

Expressing concern for the accelerating degradation of Earth, Cardinal Peter Turkson, prefect of the Dicastery for Promoting Integral Human Development, told 3,000 Ghanaians Aug. 5 to learn, know and spread the message of the 2015 papal teaching.

Turkson returned to his native Ghana for the country's fourth local observance of World Youth Day. The event allowed young people unable to travel to the Catholic Church's global World Youth Day in January in Panama to gather in their homeland for a celebration.

Emphasizing that Earth is like a mother to humans, Turkson called for deeper respect and more concrete steps to protect the planet during the event's closing ceremony. He also appealed for greater attention to the needs of poor and disadvantaged people.

The cardinal also addressed the importance of the need to change lifestyles to reduce environmental abuse. He noted that Pope Francis acknowledges that environmental awareness is growing as the world better understands the impact of the damage being done to Earth and all life on the planet.

The pope, he said, remains hopeful about the possibility of reversing the trend of environmental abuse as people adopt the encyclical's teachings.

The cardinal explained to the young Ghanaians that the full title of the encyclical, "Laudato Si', On Care for Our Common Home," was inspired by the invocation of St. Francis of Assisi, "Praise be to you my Lord," in his Canticle of the Creatures.

Climate change, he said, is a growing concern because it affects everyone and that the well-being of future generations is at stake.

He noted that scientific consensus holds that human activities have led to global warming, which has caused climates to change as shown through now unpredictable rainfall patterns, the extinction of some plant and animal species and the disappearance of islands and atolls under rising seas.

To save the earth and environment from destruction, he called for an end to the felling of trees at current rates. He also advocated for the reintroduction of the Arbor Day celebration in Ghana and elsewhere to encourage the planting of trees.