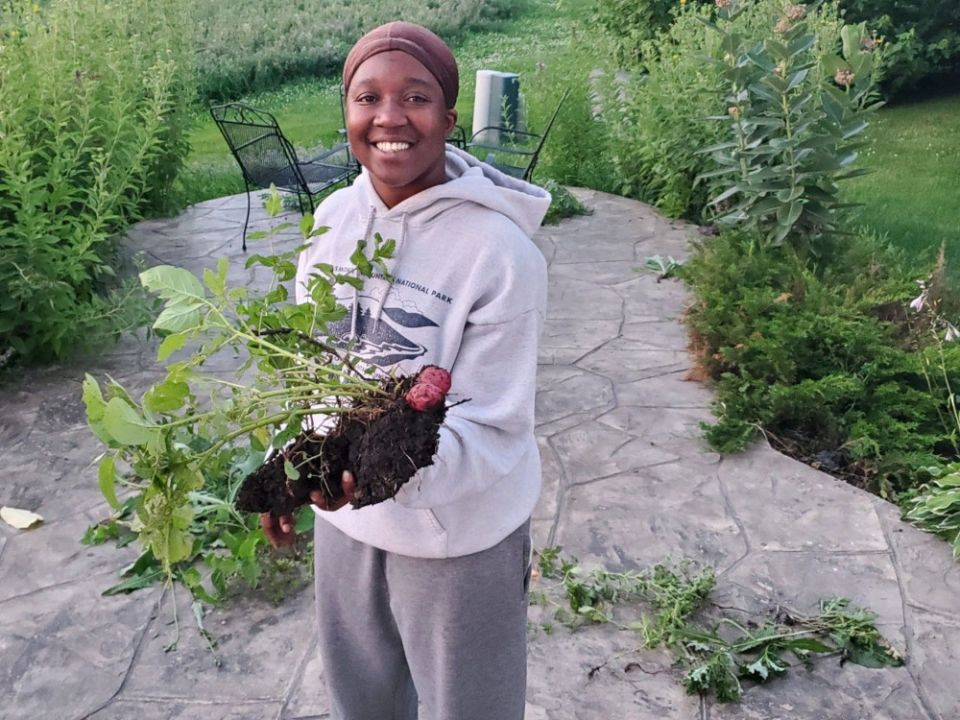 Ylanda Wilhite, photographed by her mother, Lisa, holding home grown potatoes in the back yard. (Courtesy of Lisa Wilhite)

For many city kids, flowers have cut stems and vegetables are packed in styrofoam and plastic on shelves in the grocery store. But by making a connection with nature in their own communities, kids learn that they can make a positive impact on their environment.

Chicago educator Ylanda Wilhite has made it her mission to show city kids that nature isn’t some far-off location — it's right at their own doorstep.

Through her role as senior partnership coordinator with the Keller Science Action Center of the Field Museum in Chicago, Wilhite has worked with the Mighty Acorns program, which serves third- through fifth-grade students, and currently with high school students in a program called Calumet is My Back Yard (CIMBY). Both programs provide hands-on interactions with nature and lessons about sustainability and climate change.

As a partner institution, the Field Museum focuses its programs toward students from BIPOC and disinvested neighborhoods primarily located on the city’s South and West Sides. The program strives to eliminate common misperceptions about "nature" by encouraging participants to engage with the natural environment that exists in their own neighborhoods.

Participants in the Field Museum's programs interact with plant life native to the region, such as the oak tree — which produces wood for furniture and floors, but also yields acorns that are food for squirrels and can be ground into acorn flour — as a means of making a connection with sustainability and climate change.

"We start going into the plants that we all need to live, so that we can survive … not just we're out here with grandma doing some gardening or we're out here going to a picnic, or we've already walked these trails, but what does our culture bring to this space?" Wilhite said. "I know for a fact about sustainability methods, because we already turn the lights off, or we already unplug stuff. It's bringing those types of conversations out of the students to make them realize that hey, you guys are already doing this. You just don't know that you're already contributing in so many ways."

Science and the great outdoors

Early on, Wilhite developed a love for the outdoors. She studied anthropology to learn more, and to have the opportunity to travel beyond borders, including fulfilling a childhood dream to visit Peru. After completing her education, she worked in a number of jobs involving conservation, where she integrated working outdoors with rigorous scientific endeavors.

"When I came back home, I worked at a Kendall County forest preserve out in Yorkville, Illinois. … That's where I really started learning why plants in these native species are super important to us.

"But what I realized is I had already known it from my grandma's backyard. I had already known some of these plants and didn’t realize it. I didn't have that immediate connection until I started working at this forest preserve and I'm like, oh, I know that plant; that's raspberry. Grandma grows blackberries in the back and that raspberry bush looks like that. We've got stuff like that growing here. It doesn't just come from the store. And so, because of that, the conservation field started to feel easier," Wilhite said.

'The whole goal of the program is to get people outside, to discover nature in their backyard, to get rid of this concept that you have to go to the Smoky Mountains or the Sahara Desert or Yellowstone, just to see nature.'

Interacting with the residents in Kendall County helped Wilhite in setting her career path toward conservation and outdoor education.

"A lot of them were farmers. A lot of them had lived and grown up in the country. And so, they started sharing their knowledge back to me. And I'm like, this is awesome. I can do this; this has the people aspect. So, it felt like it had everything that I initially saw in the things that brought me peace," Wilhite said.

Wilhite has family roots in the South, which gave her an awareness of the dark history sometimes associated with the natural environment for Black people in America. Her own grandmother, who was born in Georgia, was wary of the forest, despite her deep love of nature.

"We had a forest preserve maybe five minutes up the street. But we didn't go to that forest preserve. We didn't go there. And this same grandmother grew up being around nature all her life. But we didn't go there because there was a lot of generational hurt associated with the woods. Even though [nature] was something that was very much so important to my grandmother and African American culture, having those experiences being on the farm or being sharecroppers, or what have you. But we still didn't go into the woods," Wilhite said.

The core of her family is from the Roseland and Englewood neighborhoods on Chicago's South Side. However, growing up in a military family, Wilhite was exposed to numerous environments and cultures. This is not always the case for her students, many of whom have never seen Lake Michigan and may not know how to swim. An acknowledgment of the legacy of racism and segregation in Chicago and in America, along with her personal history, shape her approach to introducing students to unfamiliar environments.

Related: Exposure to nature is a privilege, and a pathway to environmental care

"Some people's reality is, they know one type of geography, and that's it. And so being able to expose them to what else is happening around the world and those connectivity points, like the little dots that draw that line to make the bigger picture. That's still very important. Because a lot of times when we think of the outdoors, we think of some wide-open space; we think of just straight wilderness. We don't see the human connectivity to it. There's a part of me that can understand it.

"So, it is talking about those cultural meanings, but realizing that it's breaking generational hurt. It can be a lot, taking them to places that I know they have not been, and the forest is one of them. And the lake is another one. And being like, this is still very much so important to your everyday routine. Just like that oak tree that's giving oxygen, but also that you walk on. Some people still hunt and shoot squirrels that live in oak trees. So, it's talking about how all of this connects, how all these dots come together," Wilhite said.

For Wilhite, a vital element of her work is encouraging kids to indulge their natural instincts and curiosity regarding the outdoors. It's also important for them to see that there are people who look like them working in conservation.

"Traditionally kids are scientists. They have this wonder and this imagination of 'What's around me? What's out here? What am I picking up?' [Working] to keep that going so it doesn't disappear, so it doesn't get lost as they get older and get burdened down with a bunch of other worldly issues. So, it's [saying] let me help to expand some of that knowledge. And then showing them that there are people that are doing this work that look like you," she said.

"We [African Americans and other people of color] may not be highlighted on a larger stage when people think of conservation work, but we are here. And especially within the last several years, we are really pushing our stories and making it known that we are already in this field. It's not, 'How do you get them here?' We are already here."