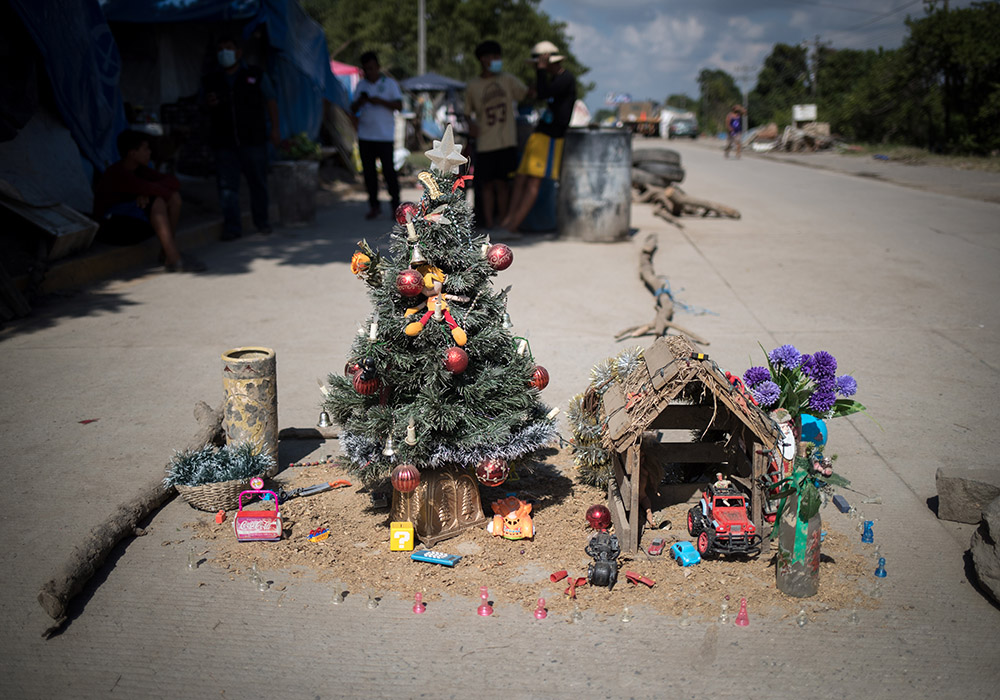 A Christmas tree and a nativity scene on the roadside, alongside provisional shelters that stretch for miles, outside San Pedro Sula, Honduras. (© Sean Hawkey)

Two years ago I accompanied a migrant caravan as a journalist, a 2,600-mile journey on foot and taking rides on trucks that started in San Pedro Sula, Honduras, and went to the U.S. border at Tijuana, an exodus to the land of milk and honey.

One of my strongest memories of the journey is of an early morning, leaving Huixtla in southern Mexico at 3 a.m. As I walked with 15,000 people on unlit rural roads, the quiet of the night was broken as people cried out to God in the darkness, praying for help. Last week, I heard the same prayers under a bridge in Chamelecón, Honduras, as people who'd lost their houses gathered for shelter at night to sleep on flattened cardboard boxes.

Over the years, I have talked to hundreds of migrants and refugees from Honduras, on migrant caravans, in camps and shelters in Tijuana and Matamoros, and with many deported migrants in Honduras. People leave everything behind to risk their lives on a long, treacherous journey when their situation finally becomes unbearable.

Many weep as they tell me their stories — stories about hardship, hunger and violence. Farmers who haven't had a good harvest in 10 years because of drought, landless farmhands who can't find work because the farms are unworkable, coffee farmers whose farms are struck by climate-related diseases, families forced to leave their homes because they can't grow food as the rains continually fail. People forced to move into overcrowded slums where there is no law enforcement, where violence and crime is rife, and there comes a tipping point where people prefer to risk the journey north.

This year's hurricane season may have tipped the balance for tens of thousands of people, many of whom are spending Christmas in makeshift tents along roadsides. People facing hunger and uncertainty. People who have worked hard for years to build a life in the cities, and who have lost everything they've worked for overnight. 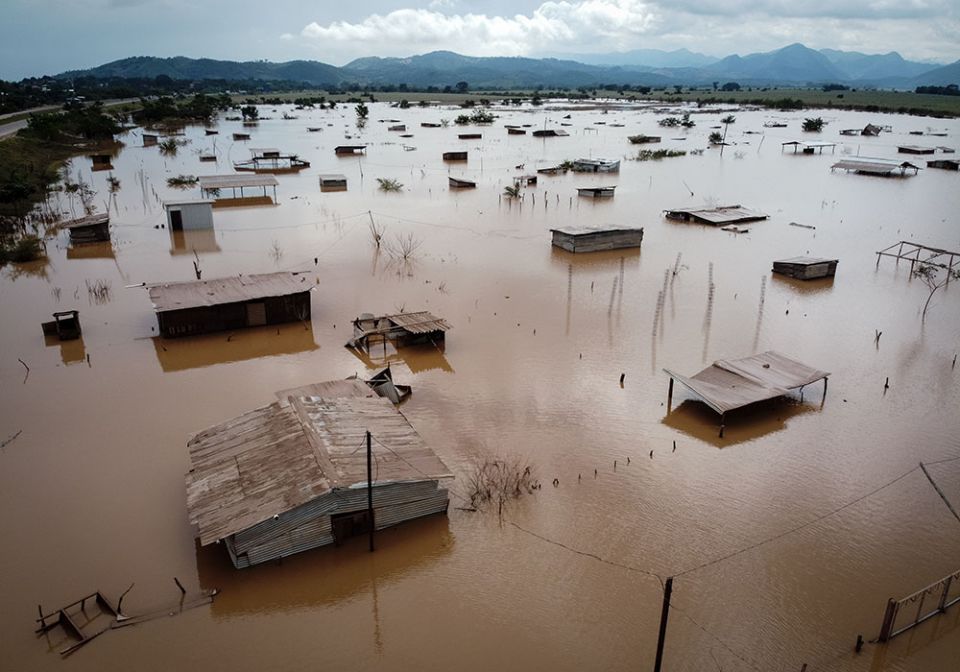 Climate change has brought an increase in the intensity and frequency of extreme weather events: droughts and wildfires on one hand, storms and hurricanes with accompanying floods on the other.

In early November, Hurricane Eta made landfall in Honduras and dropped millions of tons of water across the country. Within two weeks, before the floods had subsided, Hurricane Iota followed Eta's path, pouring water for days on already saturated lands and causing flood damage to housing, infrastructure and crops.

Housing in the north, center and west of the country was flooded for up to three weeks in places like Pimienta, pictured above. Flash floods came at 2 a.m., and people fled in the dark, but their belongings were ruined and lost, and housing was destroyed and damaged. 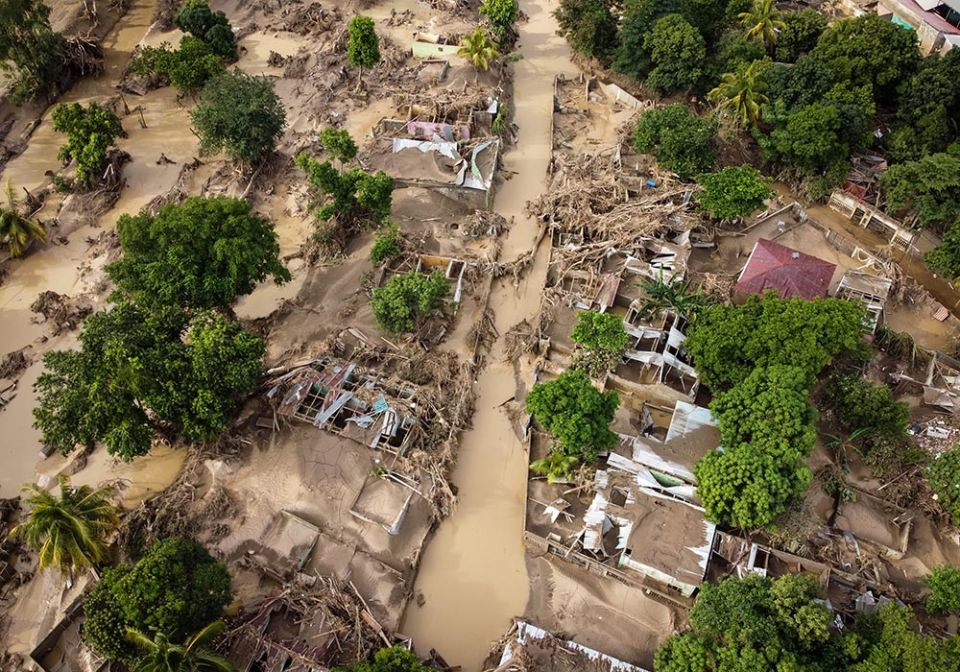 Floods with strong currents broke through river banks in areas such as Chamelecón, washing away housing and infrastructure, leaving behind debris and destruction.

Poor people tend to live in the cheapest and most vulnerable areas, which have been hardest hit, compounding poverty and social problems with massive losses. Water and sanitation systems are severely damaged or destroyed, and water-borne diseases have increased massively. 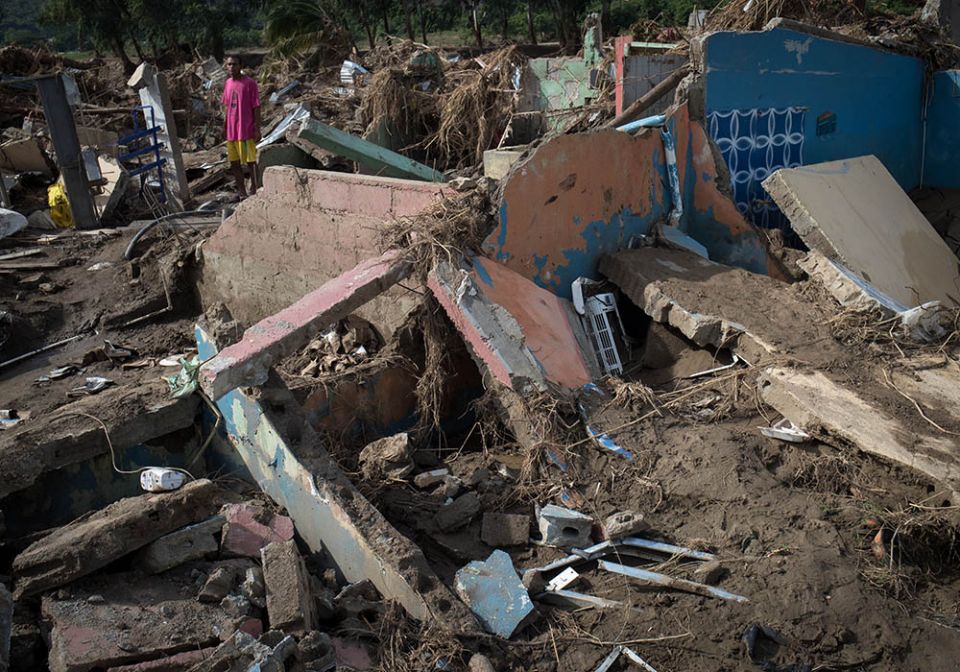 As the floodwater subsided, tens of thousands of residents returned home to see what was left. For many, the destruction wiped out decades of work, and for many it will take that long to recover again.

As it is common in Honduras for families to buy household goods and furniture on credit, they will still need to pay many monthly quotas for items such as refrigerators, stoves, beds and sofas that were washed away and destroyed. 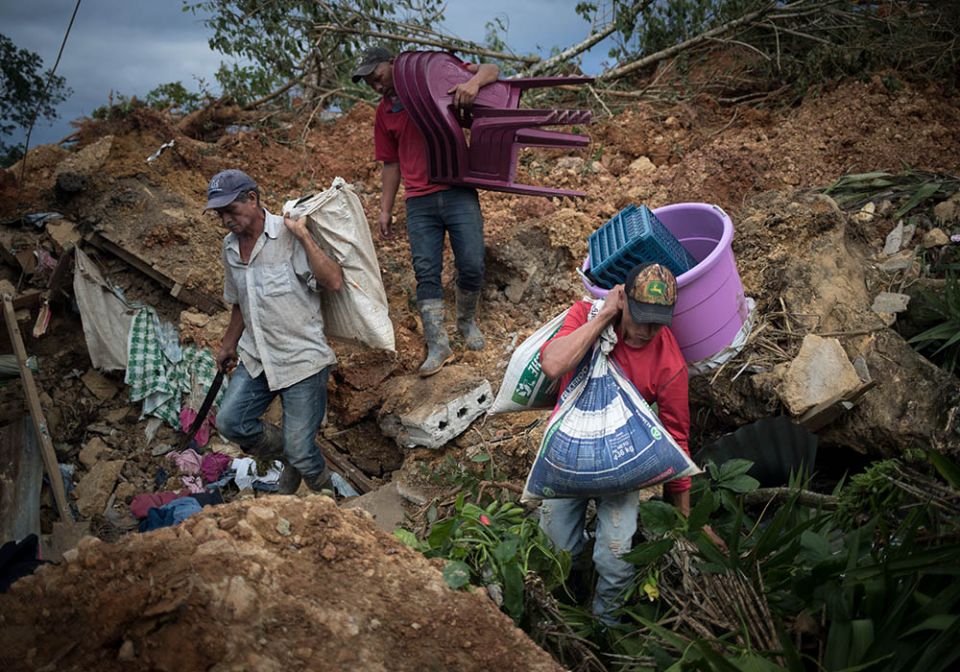 Following the very heavy rainfall that came with the hurricanes, there were thousands of landslides across the country, cutting through roads, villages and farms.

In La Reina, a village in the municipality of Protección, Santa Bárbara, 280 houses disappeared under the mud and an entire 74-acre coffee farm disappeared. Inhabitants were scared by loud rumbling underground in the mountain and left their houses in total darkness just before the landslide at 2 a.m. Miraculously, there were no fatalities. The region remained susceptible long afterward, with hundreds of fresh landslides weeks after the hurricanes.

Above, residents of La Reina scavenge for recoverable items on the edge of the landslide.

A horse-drawn cart retrieves a family's belongings from the mud in La Planeta after Hurricane Eta. Hurricane Iota hit the following day. Car washes have been busy washing people's beds and soft furniture with power wash equipment, though after two or three weeks under water, most is beyond salvaging. 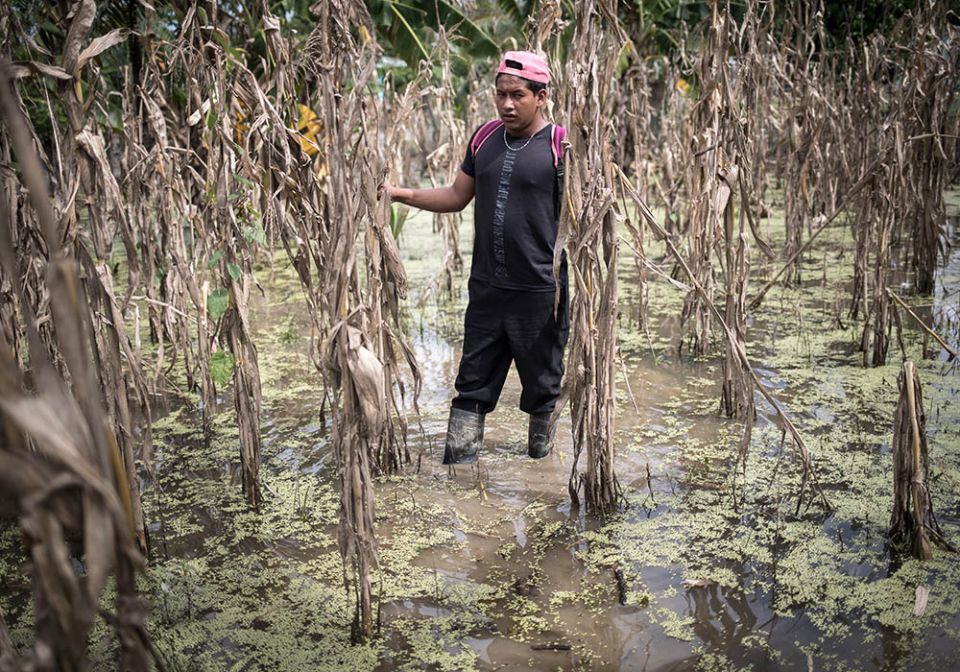 Edgardo Barahona surveys his ruined corn crop in Dos Bocas, Santa Rosa de Aguán. Standing crops of maize and beans have been lost across the region because of the floods and humidity from Hurricanes Eta and Iota. Some crops rotted, some dried out. Seeds of crops like corn and beans sprouted on the plant before they could be harvested. In some areas, almost all of the staple crops have been lost.

Nutrients have been washed out of the soil, which will decrease future harvests, and a huge wave of fungal diseases like canker and leaf rust is just beginning. Along with food for local consumption, cash crops like coffee are badly affected, which means loss of income and livelihood for families. 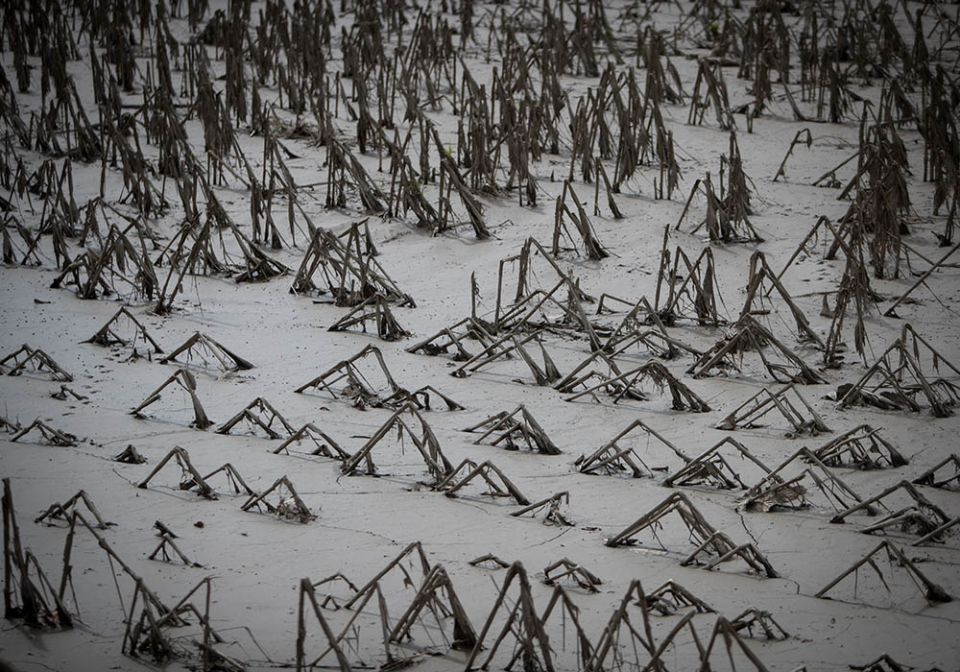 Hurricanes Eta and Iota left the wreckage of crops in their wake. Climate change causes agriculture to fail — this is already a marked feature in Honduras. Storm damage follows years of drought and irregular rainfall that had already reduced production.

There are correlations among climate change, loss of food security, violence and migration. In communities affected by food loss and income loss, there are increases in crime and vulnerability to crime. With food insecurity and crime, people begin to move away to other areas, such as marginal areas of cities that are already some of the most violent places in the world. This leads to greater international migration, mainly to Mexico and the U.S. Some internal migrants from affected areas move into vulnerable ecosystems, such as virgin forest, to clear cut and farm, mainly for cattle ranching. This contributes further to environmental instability and climate change. 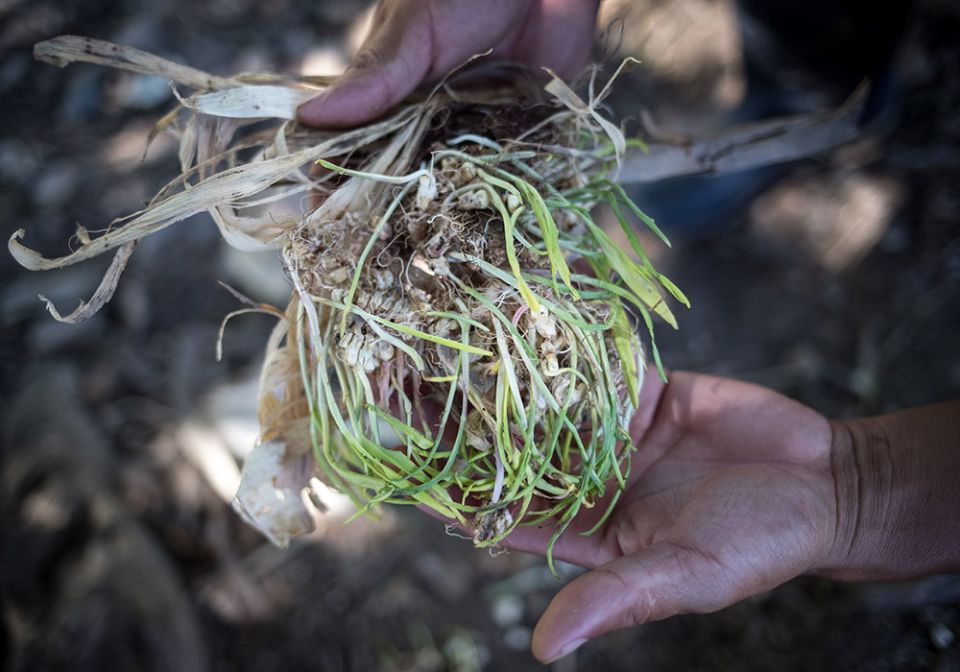 Much of the maize harvest fell to the ground with very heavy rain, and then sprouted, resulting in a huge loss of basic grains. This is particularly dangerous for subsistence farmers, especially in Indigenous communities where families rely on the crop to survive. 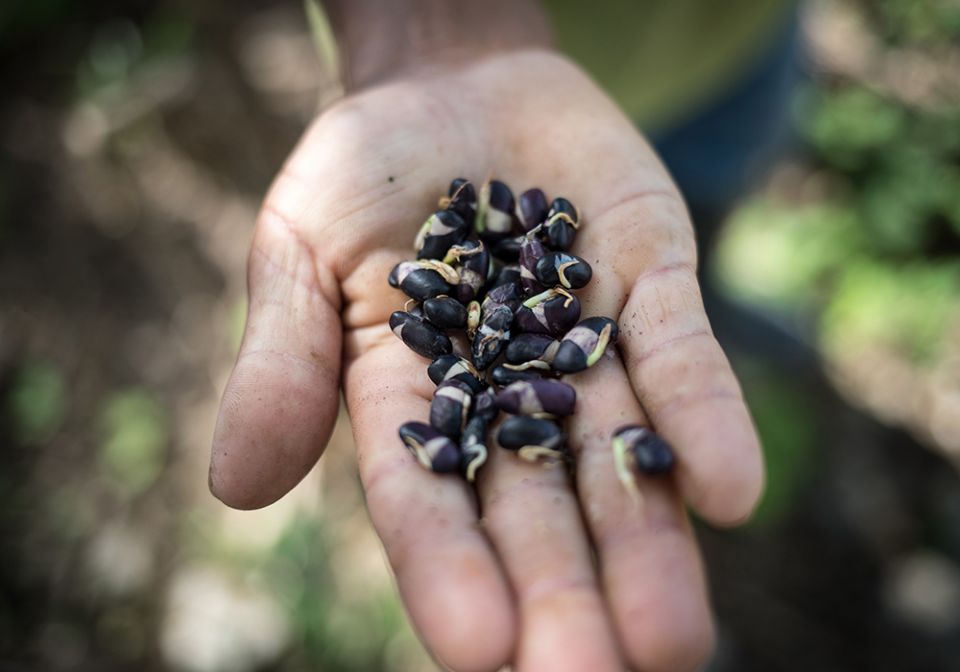 Beans have sprouted in their pods before being harvested. These beans cannot be saved, and in most cases aren't worth harvesting at all.

Indigenous Maya Chortí communities in Copán have lost approximately 90% of their bean crop and about half their maize, leaving them without the basic crops they need to survive, and leaving many in debt as they borrow to buy seed and fertilizer. 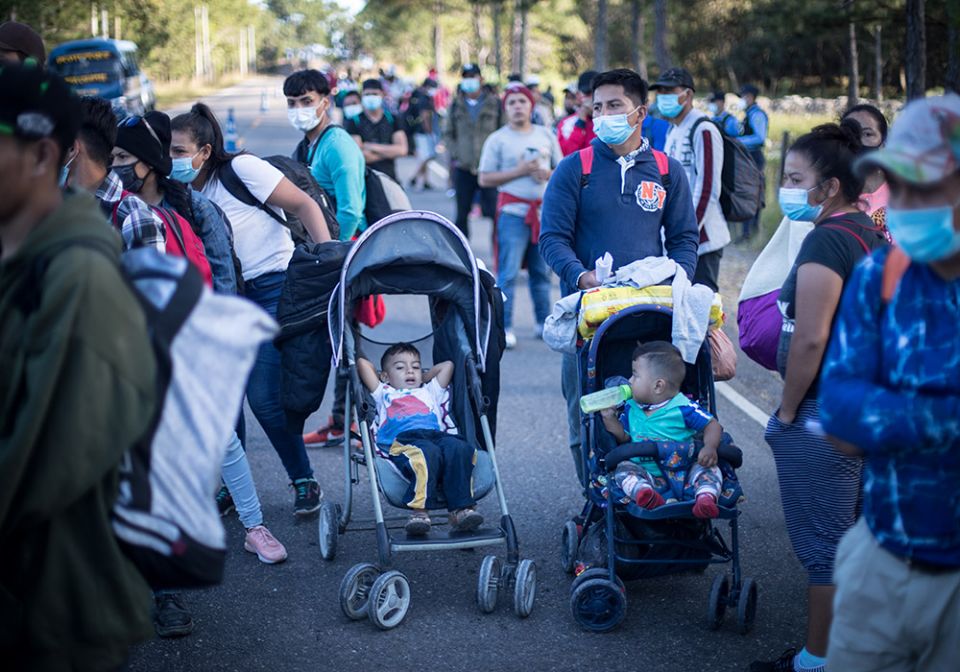 With widespread damage to housing and crops, a caravan of migrants set off from San Pedro Sula on Dec. 10, heading north to the United States. Honduran authorities, at the behest of the U.S. government, used police and military to block their way, and most were stopped and returned before even arriving at the Guatemala border. Some went around the border post through forest and farmland to get into Guatemala, but most were quickly returned to Honduras by authorities.

Migrants spoke about the desperate situation and official negligence from which they were fleeing. Some lost their houses and belongings, were living on roadsides under plastic sheeting and were completely unattended by the Honduran government. A new wave of migration is reportedly expected in January, even though the migrants know the journey is extremely dangerous, and the U.S. border is closed and hostile. It is still better than staying. 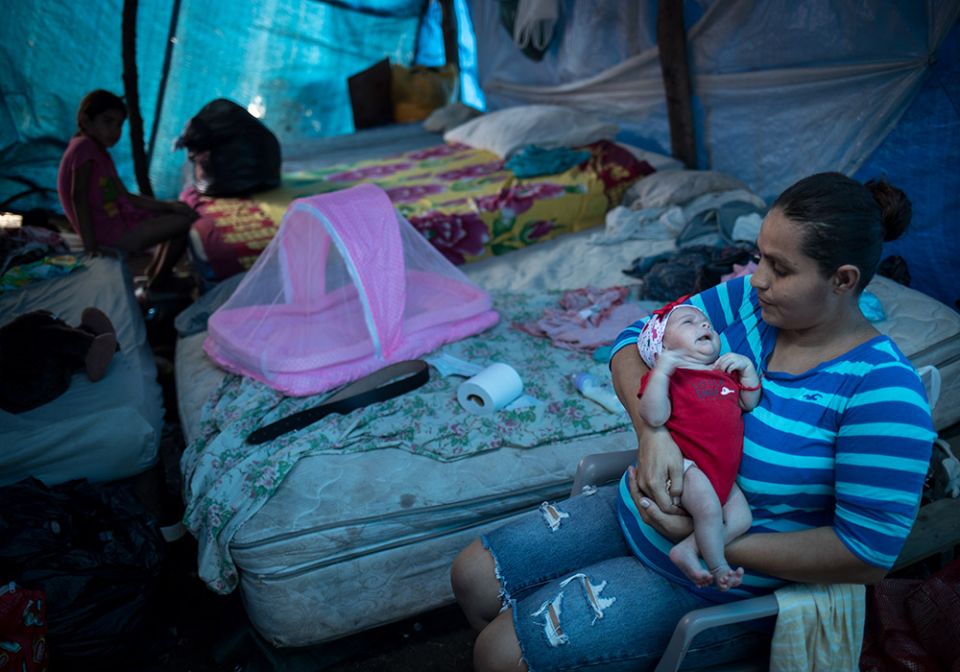 As Christmas approaches, Diana Galeano cuddles her 8-day-old baby, Estefanie, inside a makeshift shelter that they share with other families on the side of the highway in La Lima.

Like Diana, thousands of people displaced by Hurricanes Eta and Iota are forced to live on the side of the road. The humidity as the floods go down has brought millions of midges and mosquitoes, there is no sanitation and food is scarce. This is how they will be living well into the new year. 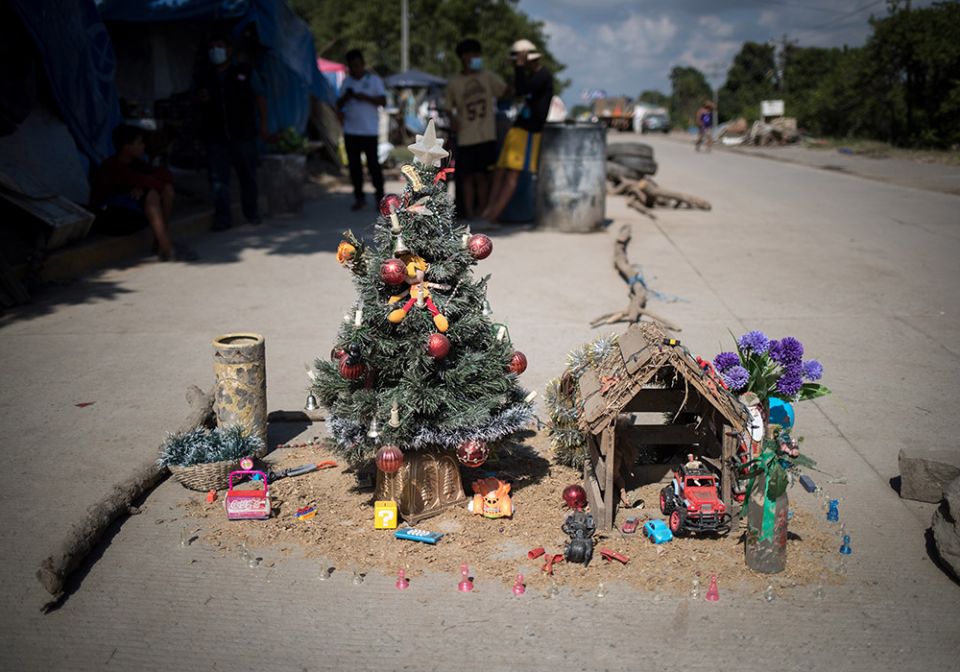 A Christmas tree and a nativity scene on the roadside, alongside provisional shelters that stretch for miles, outside San Pedro Sula, Honduras. (© Sean Hawkey)

Alongside provisional shelters that stretch for miles outside San Pedro Sula, Diana's neighbor put up a Christmas tree and nativity scene on the roadside.

The Christmas tree is a reminder that the global scientific community and faith-based groups across the world call out together for us all to take urgent action to slow climate change: to stop burning fossil fuels and to restore forests around the globe that have been destroyed or degraded. Some conservation groups call for the planting of a trillion trees, although scientists say it is more crucial to stop burning fossil fuels and to protect the forests that exist.

The nativity scene is a powerful reminder of Mary and Joseph, who found no room at the inn and were forced to shelter and sleep with animals, the least suitable place imaginable for the birth of a baby. No one made room for them. We are all innkeepers today, deciding whether we have room for strangers, and whether we should help people who — like Mary and Joseph — have nowhere to go. 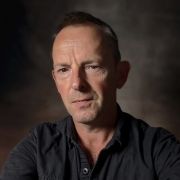 Sean Hawkey is a widely published documentary photographer and videographer from the United Kingdom who focuses especially on Latin America, climate change and migration.