To work toward a just society, we need a Green New Deal 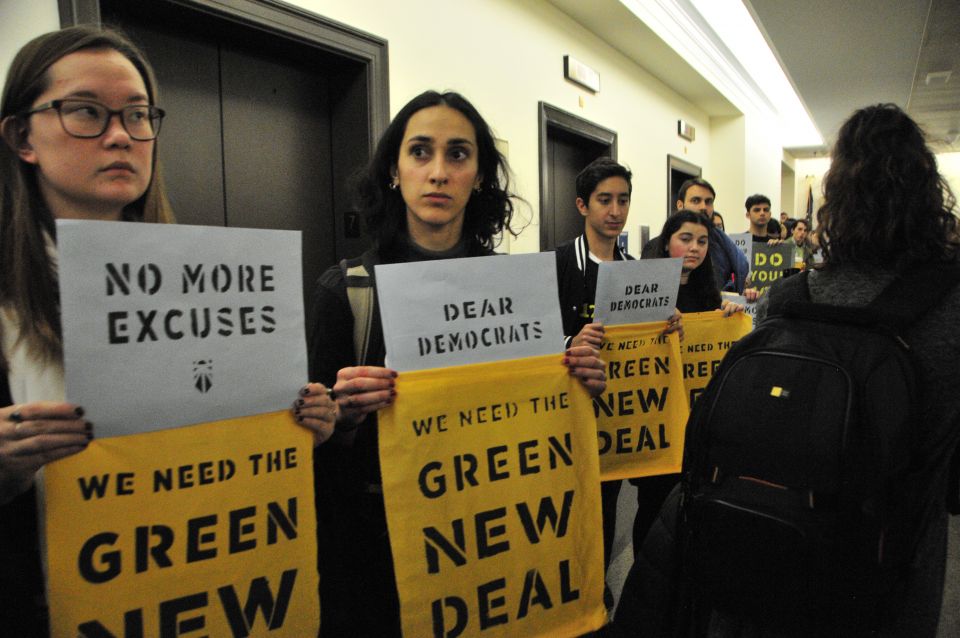 Young activists from the Sunrise Movement descended upon congressional offices in mid-November to demand that elected officials push for the Green New Deal. (Courtesy of Sunrise Movement)

Among the many initiatives that offer real hope for the future as the new Congress begins its work in 2019, a Green New Deal is the most timely and hopeful. A Green New Deal is a critical way to practice ecological solidarity in the spirit and word of "Laudato Si', on Care for Our Common Home" and create a society devoted to the common good of all.

Undoubtedly, the idea of a Green New Deal finds immediate opponents on both sides of the congressional aisle and its greatest obstacles include the intransigence, obstruction and plain deceit of the president and the GOP. This deceit, in terms of both climate change denial and occlusion of a corrupt campaign financing system, is killing us and the planet.

Hope and real change, however, are here. The success of the Sunrise Movement demonstrates the vitality of national youth organizing for real action to combat climate change, electing the legislators and advancing legislation that can make a Green New Deal a reality.

Whereas only a handful of congressional members were aware of, much less committed to, a Green New Deal prior to the 2018 midterm election, protest actions by the Sunrise Movement have helped put a Green New Deal on the legislative agenda table, mobilized hundreds of national organizations into a concerted effort and gained the public commitment of 45 congressional members, including at least three U.S. senators.

Massive mobilization in support of a Green New Deal may be just in time for the planet. In its October 2018 report on the catastrophic effects of climate change, the Intergovernmental Panel on Climate Change warns that the world may only have 12 years to limit the worst impacts of global warming.

According to the National Climate Assessment, an ongoing U.S. interagency effort to assess the science of climate change, if we do nothing to address climate change, "rising temperatures, sea level rise, and changes in extreme events are expected to increasingly disrupt and damage critical infrastructure and property, labor productivity, and the vitality of our communities."

The National Climate Assessment report warns that "without substantial and sustained reductions in global greenhouse gas emissions," impacts include "annual losses in some sectors are projected to reach hundreds of billions of dollars by the end of the century — more than the current gross domestic product of many U.S. states."

In rudimentary terms, a Green New Deal involves a massive program of investments in clean energy infrastructure and jobs designed to entirely transform the energy sector and, indeed, the entire economy.

Rep. Ayanna Pressley, newly elected Democrat from Massachusetts, describes the vision of a Green New Deal: "It's about our most precious commodity: people, families, children, our future. It's about a move to 100 percent renewable energy and the elimination of greenhouse gases. It's about ensuring that our coastal communities have resources and tools to build sustainable infrastructure that will counteract rising sea levels, beat back untenable natural disasters, and mitigate effects of extreme temperatures."

The idea of a Green New Deal, however, faces headwinds of resistance because it directly challenges the most powerful economic interests that protect the status quo.

Yet the economic success of President Franklin D. Roosevelt's original New Deal was realized only through massive public investments in infrastructure. A walk through City Park in New Orleans or countless national parks, or a drive along the Merritt Parkway in Connecticut reveal only a few of the enduring successes of the Works Progress Administration.

Yet it is also true, as Richard Rothstein uncovers in The Color of Law: A Forgotten History of How Our Government Segregated America, that racial disparities are rooted in a century of governmental and business policy, much originating in the New Deal, that created the structures of housing and educational segregation and the conditions of anti-black violence in places like Ferguson, Missouri.

Unlike the anti-black white supremacy supported by the original New Deal, a key feature of a Green New Deal is its principled focus on a just transition to a green economy by prioritizing communities excluded from benefits of the current economy and most negatively impacted by environmental racism.

Sadly, however, it is unsurprising that neoliberal politicians, Republicans and Democrats alike, complain that a Green New Deal is impractical, too expensive and naively "socialist," that is, big and incompetent government at its worst. Our nation's history tells another story.

Rep. Rashida Tlaib (D-Michigan), who is working to make Michigan a leader in green energy, recalls, in an interview with The Intercept's Kate Aronoff, how the U.S. was "the Arsenal of Democracy and helped saved the planet from real darkness decades ago, and there's no reason we couldn't be one of the regions to build America's green energy infrastructure and help save the planet again in the process."

Indeed, it seems we forget how the U.S. government led the mobilization and transformation of the economy that was integral to the defeat of Hitler in World War II. Government administration of control of prices, wages and coordinating economic sectors were all vital to producing everything the Allies needed for success. Far from a Soviet command-style economy, U.S. corporations boomed and thrived beyond the war.

Conversely, without the mobilization led by the U.S. government in World War II it is unlikely that the private sector alone could have organized the national economy with equal speed and effectiveness.

Consider that Oil Change International, created in 2005 to educate about the true impacts of fossil fuels, reports that the U.S. government spends $20.5 billion on direct and indirect subsidies to fossil fuel industries. If we add massive expenditures "to acquire and defend fossil fuel interests around the globe," as well as infrastructure spending and maintenance for an antiquated energy system, the U.S. is spending "hundreds of billions of dollars supporting an industry that is destroying our climate and buying off politicians."

Saikat Chakrabarti, the campaign chair for newly elected Rep. Alexandria Ocasio-Cortez (D-New York) and now her chief of staff, encapsulates how we need radical solutions to address radical problems. He explains that "The two options are, either we're going to intentionally do the big things we want, or big things we don't want will happen to us."

In other words, we can maintain the death wish of the dominant economic system or we can work together to shape a world where all forms of life may thrive. No doubt, as David Roberts at Vox argues, a "great deal of political and policy engineering … lies ahead" to meet the three main goals of de-carbonizing our economy, creating green jobs and ultimately nurturing a truly just society.

A Green New Deal is a moral, economic and ecological necessity. It offers a radically practical and visionary plan that people of faith and justice ought to be advancing, especially over the next two years. It is time to join in this great work of love and justice so all life may thrive.

Column | To work toward a just society, we need a Green New Deal