Mass on the ship celebrated by Cardinal Peter K.A. Turkson, Prefect of the Dicastery for Promoting Integral Human Development c.jpg 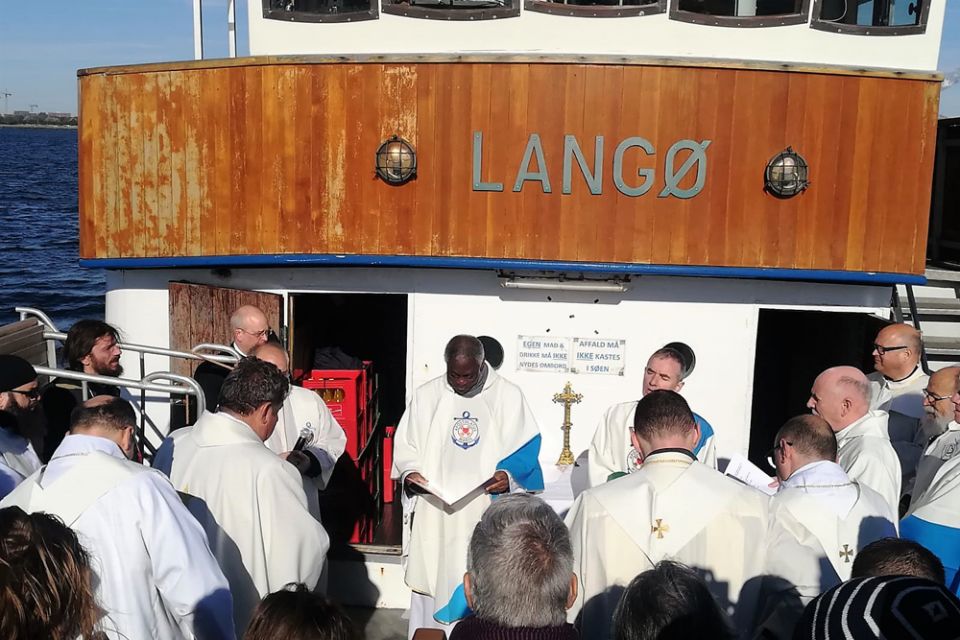 Cardinal Peter Turkson, prefect of the Dicastery for Promoting Integral Human Development, celebrates Mass onboard a ship in Copenhagen May 5 during a Vatican-sponsored conference titled "The Common Good on Our Common Seas." (Courtesy of Global Catholic Climate Movement)

Several dioceses located near important maritime trade centers and ports are among the dozen latest Catholic institutions to commit to divest financial holdings from fossil fuels.

The joint announcement was made Tuesday, days after the conclusion of a Vatican-sponsored conference on the challenges facing the oceans and coastal areas.

Among the divesting dioceses are the Panama City Archdiocese, adjacent to the Panama Canal and the first archdiocese in the Americas to divest, and the Catholic Church in Greece, itself a country with a rich seafaring heritage and home today to the world's largest merchant marine fleet.

Joining them was the San Carlos Diocese of the Philippines and Caritas Philippines, the church's development agency in the Southeast Asian archipelago nation, whose people crew more than one quarter of global sea vessels.

Others included the Malta Archdiocese and, within Italy, the Naples Archdiocese, the Civitavecchia-Tarquinia Diocese and the Savona-Noli Diocese, and the Siracusa Archdiocese — the former three all popular ports for cruise ships. Also divesting are the Sisters of Saint Francis of Rochester, Minnesota, the Institute of Sisters of Mercy of Australia and Papua New Guinea, and Social Justice Ireland.

The 12 organizations join more than 120 Catholic institutions that already have made public commitments to expunge from their investments shares in companies involved in the mining and refining of coal, oil and natural gas due to their primary role in causing climate change.

Burning fossil fuels releases heat-trapping greenhouse gases that have warmed the planet 1 degree Celsius since the late-19th century. Climate scientists say that the world must reach net-zero carbon emissions by 2050 to limit warming to 1.5 C and with it prevent far more dangerous effects, like more extensive droughts and increasingly severe weather, that rising temperatures bring.

"The climate crisis is real, and we don’t have a moment to lose in solving it. Dropping fossil fuels sends a strong message to the world — the Catholic Church isn’t waiting for climate justice," said Tomas Insua, executive director of Global Catholic Climate Movement, in a statement.

Cardinal Crescenzio Sepe, the archbishop of Naples, added, "It is time to become aware of the seriousness of the climate crisis and to work to ensure a respectful change in behaviors and lifestyles of each person. I think that this civic responsibility must be a moral duty and a concrete commitment for every good Christian."

Related: Catholic Church in Austria to divest from fossil fuels

More than 90% of global trade travels by sea, with shipping accounting for an estimated 2% to 3% of global greenhouse gas emissions. Many large ships operate on "heavy fuel oil," a high-sulfur type of oil that releases noxious gases, including sulfur, that can be especially harmful to the health of those aboard, particularly crews who spend long durations at sea.

In 2016 the International Maritime Organization — the United Nations agency charged with setting safety and environmental standards for international shipping — set a new fuel oil standard that is expected to reduce sulfur emissions from ships by 80%. The standard will go into effect beginning January 2020.

Just days before the divestment announcement and ahead of an IMO meeting next week in London, the Vatican Dicastery for Promoting Integral Human Development co-hosted a conference in Copenhagen titled "The Common Good on Our Common Seas." The conference, held May 3-5, was also organized by Stella Maris the Apostleship of the Sea; Justice and Peace Europe; Justitia et Pax Denmark and the Global Catholic Climate Movement.

Cardinal Peter Turkson, head of the human development dicastery, was among the conference speakers. Other attendees included Simon Bergulf, the director of regulatory affairs for A.P. Møller–Maersk, the world's largest container shipping company, and Peter Thomson, U.N. special envoy to the oceans. 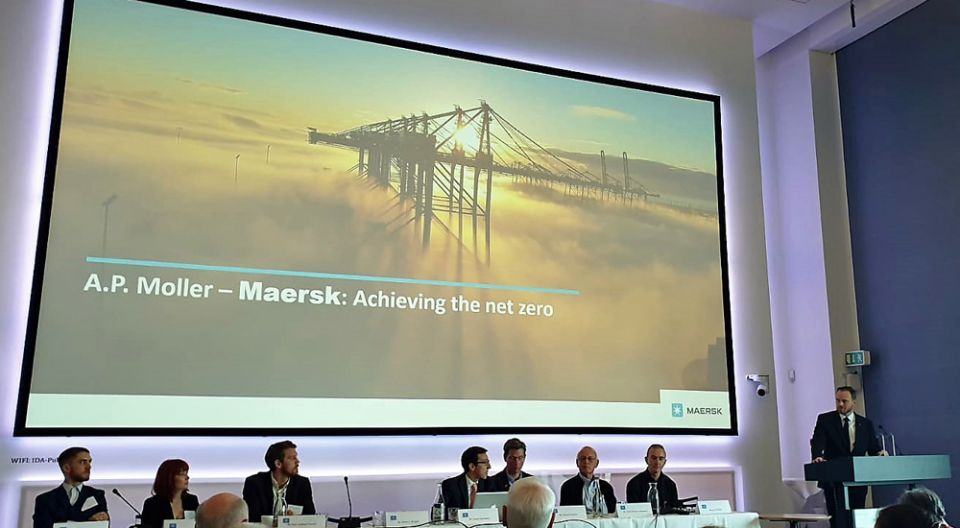 Simon Bergulf, director of regulatory affairs for the Danish shipping company A.P. Møller–Maersk, speaks on achieving carbon neutrality in the shipping industry during the Vatican-sponsored conference "The Common Good on Our Common Seas." (Courtesy of Global Catholic Climate Movement)

In a letter to conference participants, Pope Francis emphasized intergenerational justice and dialogue as two important elements when considering the challenges facing the seas and coastal communities, not only in terms of climate change and polluted waters, but also in the exploitation of the shipping industry for human trafficking.

The pope characterized intergenerational solidarity as "a key moral imperative in responding to the problems of our time."

"By placing the needs of our contemporaries, especially young people, and also of generations yet to come, at the heart of efforts to care for creation, then the common good of all may be promoted and protected, 'since the world we have received also belongs to those who will follow us,' " Francis said, quoting from his encyclical "Laudato Si', On Care for Our Common Home."

The Global Catholic Climate Movement, which organized the latest divestment announcement as well as others in recent years, emphasized the connections that several of the Catholic institutions have to the shipping industry.

The Panama City Archdiocese is situated near the Pacific Ocean entrance of the Panama Canal, which since its construction in 1914 has served as a critical trade route in saving marine merchants time and money. As many as 15,000 ships pass through the canal each year.

Roughly one-quarter of the 1.5 million seafarers globally are from the Philippines, while Greece possesses more merchant marine ships than any other nation.

At next week's International Maritime Organization (May 13-17), its marine environment protection committee will discuss a strategy to reduce greenhouse gas emissions from international shipping by as much as 70% by mid-century and develop guidelines for the new sulfur fuel standard. It will also explore ways to limit marine plastic litter.