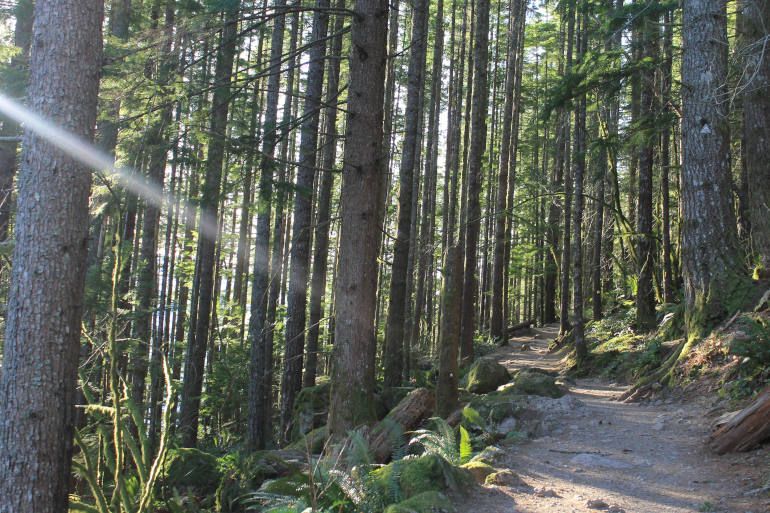 Fir trees along the Rattlesnake Ledge Trail in the foothills of the Cascade Mountain Range outside Seattle. (Brian Roewe)

Last week around this time, I was among those to #OptOutside.

The hashtag is part of a campaign begun in 2015 by outdoors retailer/co-op Recreation Equipment Incorporated (REI), inviting its members and employees to forgo the craze of Black Friday shopping and instead spend the day outside enjoying nature. To numb the shopping temptation, REI closes shop on its website and at its 162 stores on Black Friday — delaying those deals on crampons and sub-zero sleeping bags by 24 hours — and also pays its employees to stay home. Other companies have also joined the Take-Black-Friday-Off movement.

This year, REI expanded the campaign by asking that people not only opt for the outdoors over shopping aisles, but also "opt to act" through clean-up efforts in local parks and communities. Along with it, the co-op, based in Washington state, unveiled its own plans to become a zero-waste company and its commitment to a circular economy, in part through incentives for members to reuse and rent gear rather than always buying new.

"As a single company, our impact is limited, but as a community, we can drive change that powers meaningful action beyond our walls," REI CEO Eric Atz wrote in a letter ahead of the campaign.

[Full disclosure: I am among the 18-million card-carrying REI members.]

The inaugural launch of #OptOutside came just months after Pope Francis released his landmark encyclical "Laudato Si', on Care for Our Common Home." For this outdoors-loving reporter, it was hard not to see more than a few parallel themes across the pope's document and the idea of intentionally sitting out the busiest shopping day of the year.

In LS #203, for instance, which opens a section titled "Towards a New Lifestyle," Francis writes, "Since the market tends to promote extreme consumerism in an effort to sell its products, people can easily get caught up in a whirlwind of needless buying and spending."

Francis talks about the dangers of a consumerist lifestyle — a theme of his papacy — that as the need for more things grows, the sense of the common good disappears. "As these attitudes become more widespread, social norms are re­spected only to the extent that they do not clash with personal needs."

He continues in LS #209: "Many people know that our current progress and the mere amassing of things and pleasures are not enough to give meaning and joy to the human heart, yet they feel unable to give up what the market sets before them."

He adds two paragraphs later that "Only by cultivating sound virtues will people be able to make a selfless ecological commitment. A person who could afford to spend and consume more but regularly uses less heating and wears warmer clothes shows the kind of convictions and attitudes which help to protect the environ­ment. There is a nobility in the duty to care for creation through little daily actions, and it is won­derful how education can bring about real chang­es in lifestyle."

A key part of that, Francis said, is learning to see and appreciate beauty, especially in nature. "If someone has not learned to stop and admire something beautiful, we should not be surprised if he or she treats everything as an object to be used and abused without scruple. If we want to bring about deep change, we need to realize that cer­tain mindsets really do influence our behavior."

I spent my #OptOutside day walking with my wife around our Kansas City neighborhood. Though there weren't any tall trees like in the photo above from our trip to Seattle this time last year, it was still not a hectic, stress-filled shopping lane. And that alone was a beautiful sight worth appreciating.

If you are wondering the whereabouts of regular EarthBeat Weekly author Bill Mitchell, well, he'll soon be boarding a boat of his own, setting sail for the Galapagos Islands. I'll continue at the newsletter helm until his return in two weeks. At which time, we can only hope he has some wonderful photos to share.