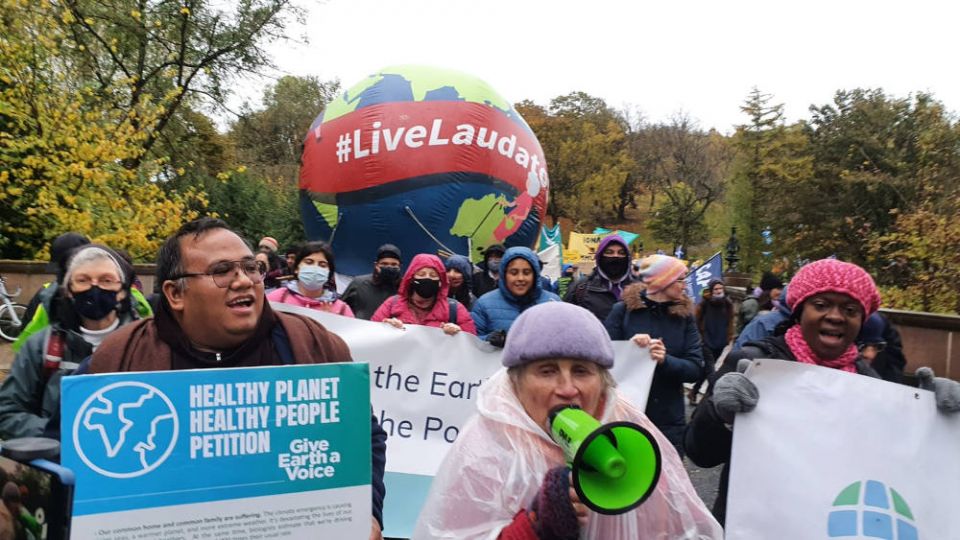 Thousands of Catholics joined the Global Day of Action for Climate Justice, which drew upwards of 100,000 people into the streets of Glasgow, Scotland, on Nov. 6, at the midpoint of the COP26 United Nations climate change conference. (Laudato Si' Movement)

On a wet, windy and cold day in Scotland, an estimated 100,000 people took to the streets of Glasgow on Nov. 6 in demonstrations calling for increased action and results from COP26, the two-week United Nations climate summit being hosted by the United Kingdom.

Among the throngs of people marching from Kelvingrove Park to Glasgow Green as part of the Global Day of Action for Climate Justice were hundreds of Catholics, many hailing from the U.K. while others represented countries across Africa, the Pacific, Europe and the Americas.

EarthBeat asked some of the participants to share in their own words what the march meant to them and what message they sought to send to delegates and world leaders at COP26. 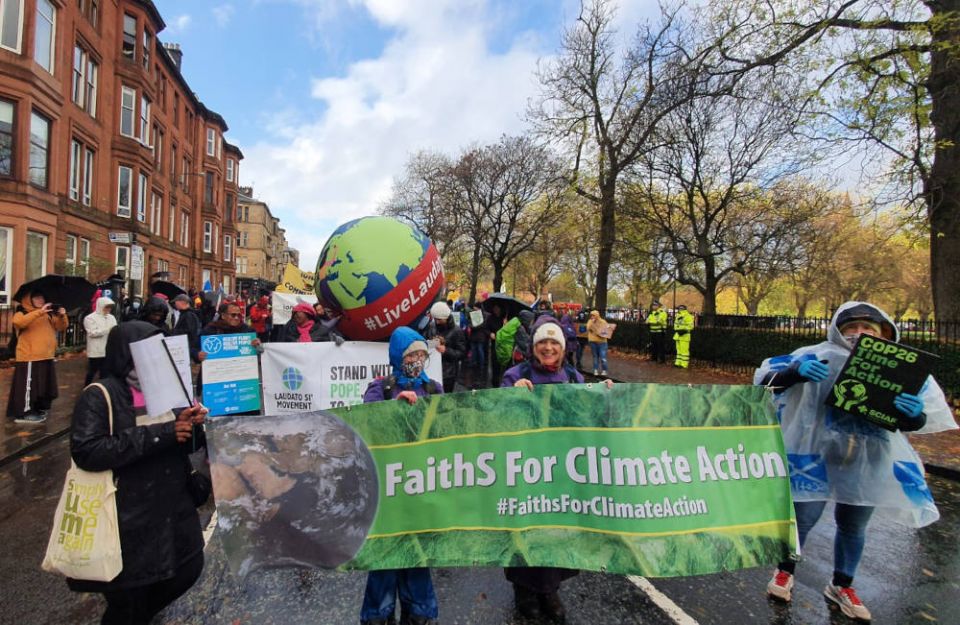 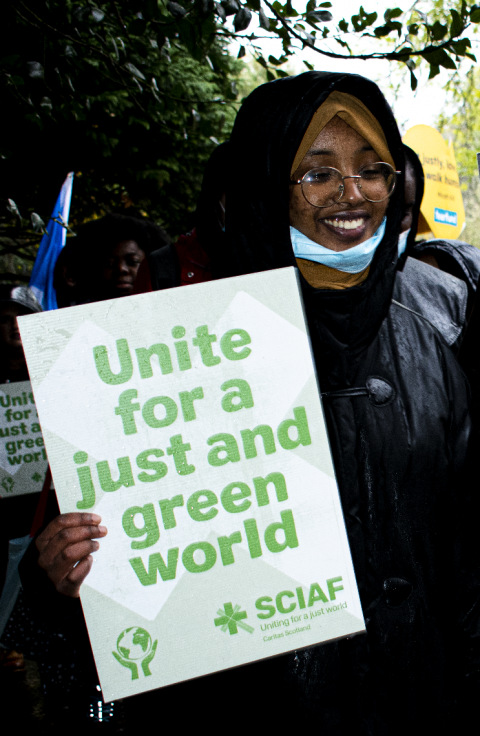 Ayaat Hassan
Student at Notre Dame Catholic High School in Glasgow, and part of SCIAF, the official relief and development agency of the Catholic Church in Scotland

"We're here to represent the youth of today, because climate change is going to have the biggest impact on us and we deserve to have our voices heard. The message this march sends is that we care about this a lot." 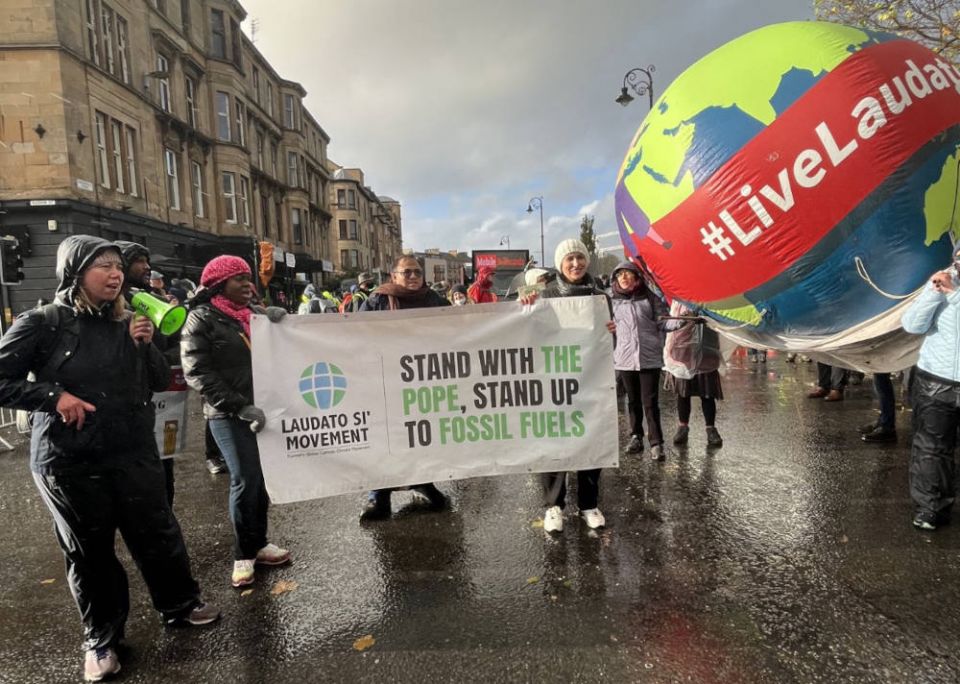 "It's very moving to be here with the Laudato Si' globe and all the activists. We just hope the message here gets through to the COP itself. ... So far it's very high on aspirations and it's high on long-term targets. But there's no detail." 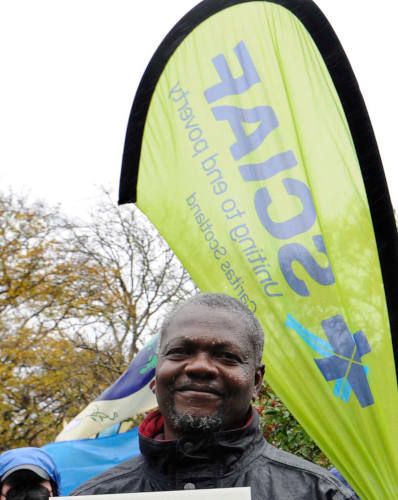 "I bring a message from the poor adversely affected by climate change. Global warming and extreme weather patterns are making it difficult for people to survive. I come here asking everyone to act now to save the planet and save the lives and livelihoods of people in Southern Africa and other less-developed countries." 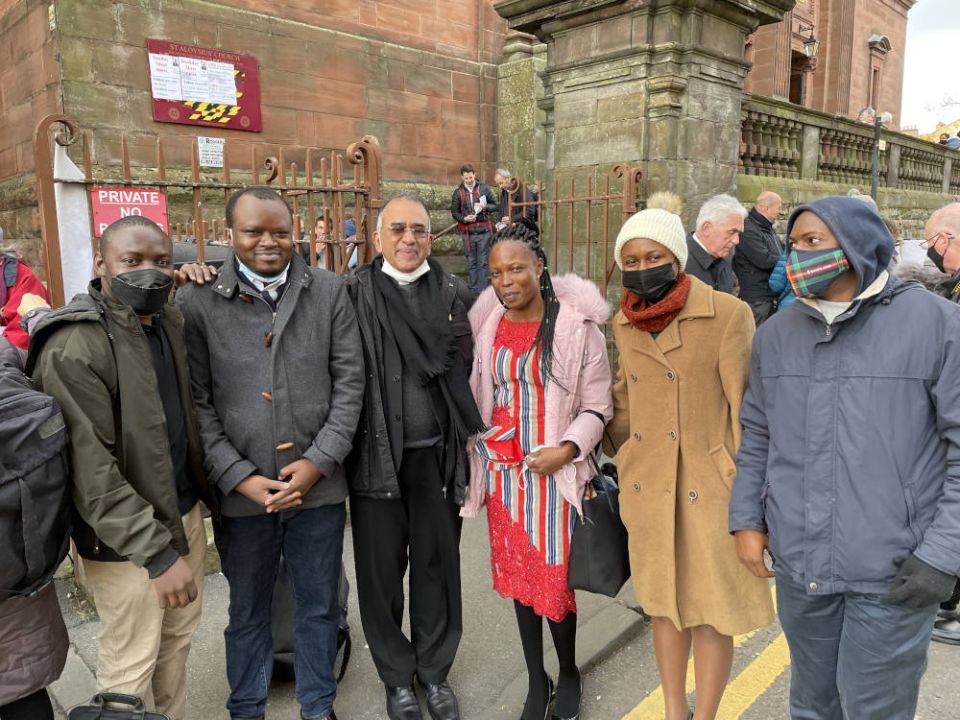 "CYNESA joined the global environmental movement [at both the youth climate strike on Nov. 5 and Global Day for Climate Justice on Nov. 6] to march and send a strong message of acting for [the] climate crisis with the urgency it deserves in the streets of Glasgow.

"We made it known to the world that in Africa, most young people do not choose to be climate activists, but are forced, because their own survival is fully threatened and their future is not certain [because of] water scarcity, food insecurity, extreme weather events forcing high numbers of them to migrate to Europe in very appalling conditions.

”The future is not a destination that will wait for us; it is one that we must create, and CYNESA joins the global environmental movement to demand climate justice and a more ambitious outcome from this COP26 as the window of the opportunity to turn around the devastating effects of climate change, as we are the only generation with this unique burden of responsibility to do something about [the] climate crisis." 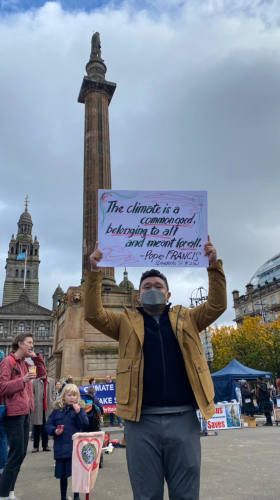 "Eight years after the onslaught of Typhoon Haiyan in the Philippines, more than a thousand people are still missing. Year after year thenceforth, the intensity of extreme weather conditions is increasing.

"COP26 is an opportunity to address losses and damages, both for humanity and ecosystems. Climate action is not only about common but differentiated responsibilities, but a collective conscience and uncompromised moral imperative towards intergenerational justice, equity and common good." 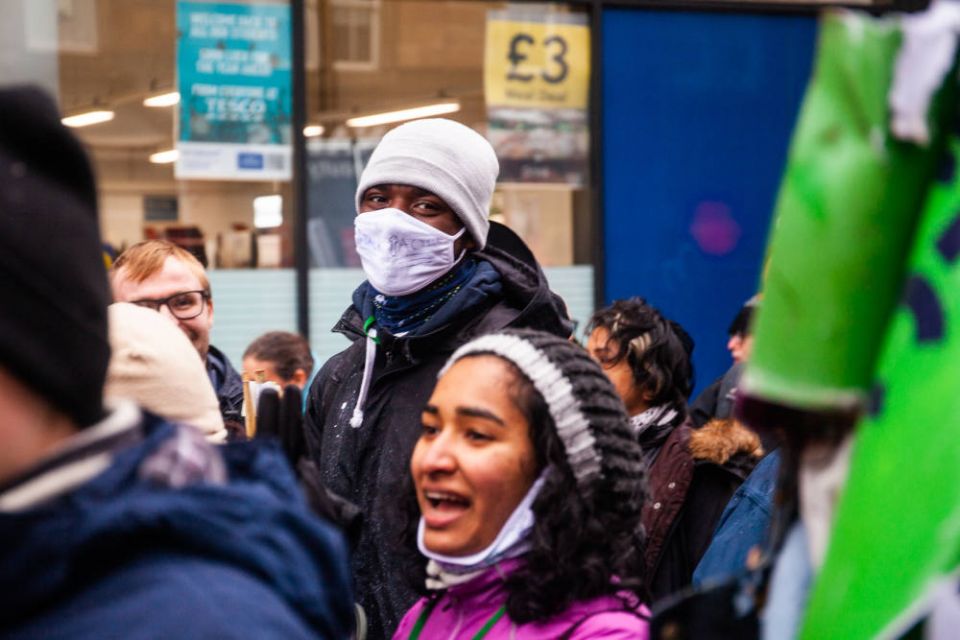 "I am here to represent the drive and enthusiasm of young people across the globe who want a more sustainable tomorrow. The opportunity to be surrounded by a community of passionate young adults focused on future-proofing their planet for generations to come was something I simply could not pass up." 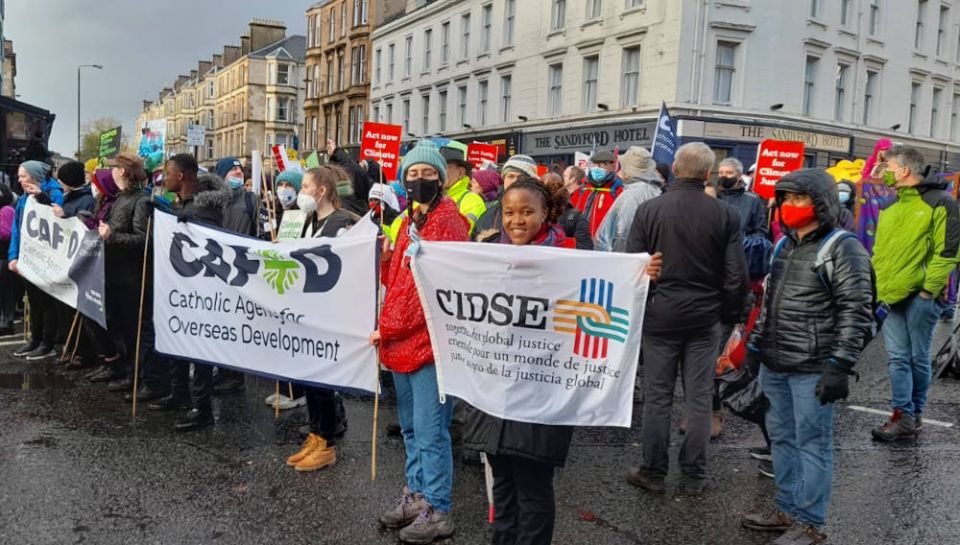 "We push on, no matter what! We need climate action now!" she said, even despite barriers, whether inside the summit or with the rainy weather outside.

"We are living in a climate crisis, and I believe the youth deserve to be standing right next to the world leaders, contributing to their decisions.

"As young people, we are the next generation. We will be living in the world that the generation before left us. Because of that, we deserve a voice and deserve to stand together and fight for the world we're living in before it's too late." 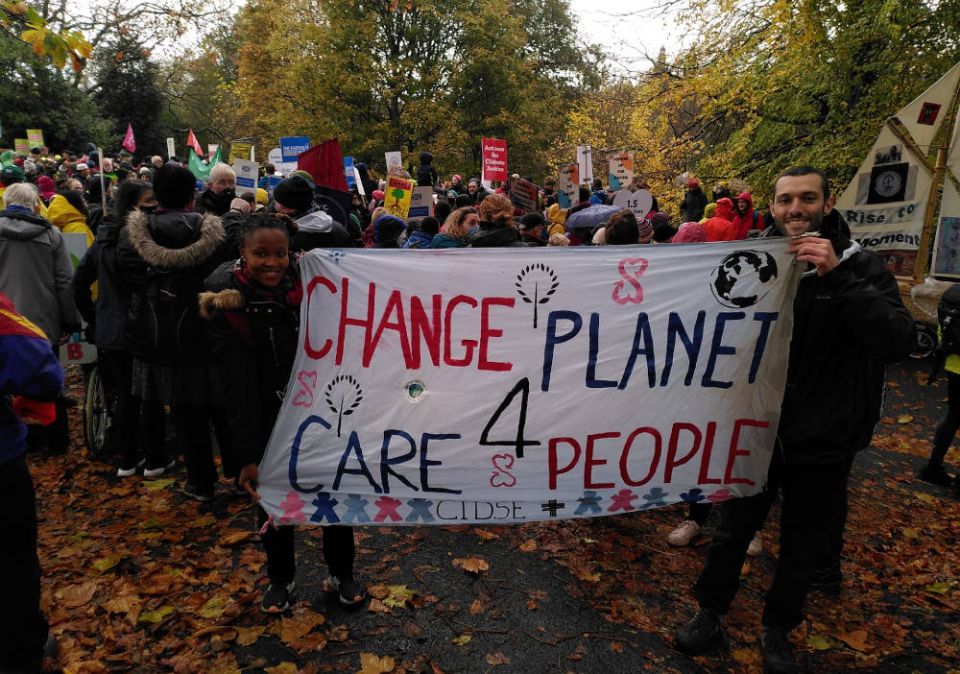 "Inspired by Laudato Si', we renew our commitment to 'change for planet and to care for the people' and joined the march in Glasgow." 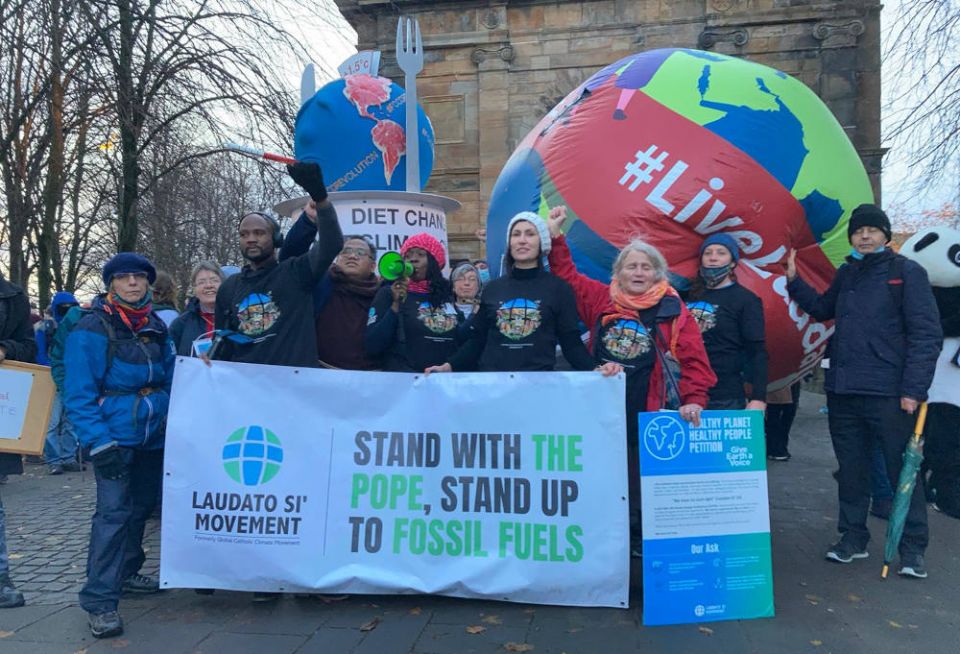 "We sang. We chanted. We prayed. And it just was a very powerful day. Everyone is here for our common home, for climate justice and to call for justice for the most vulnerable people in our world and planet Earth." 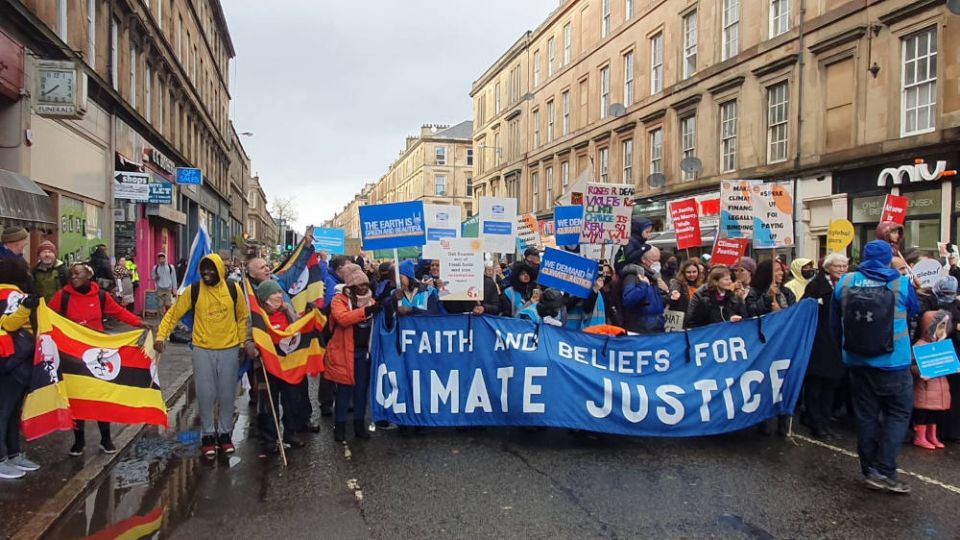