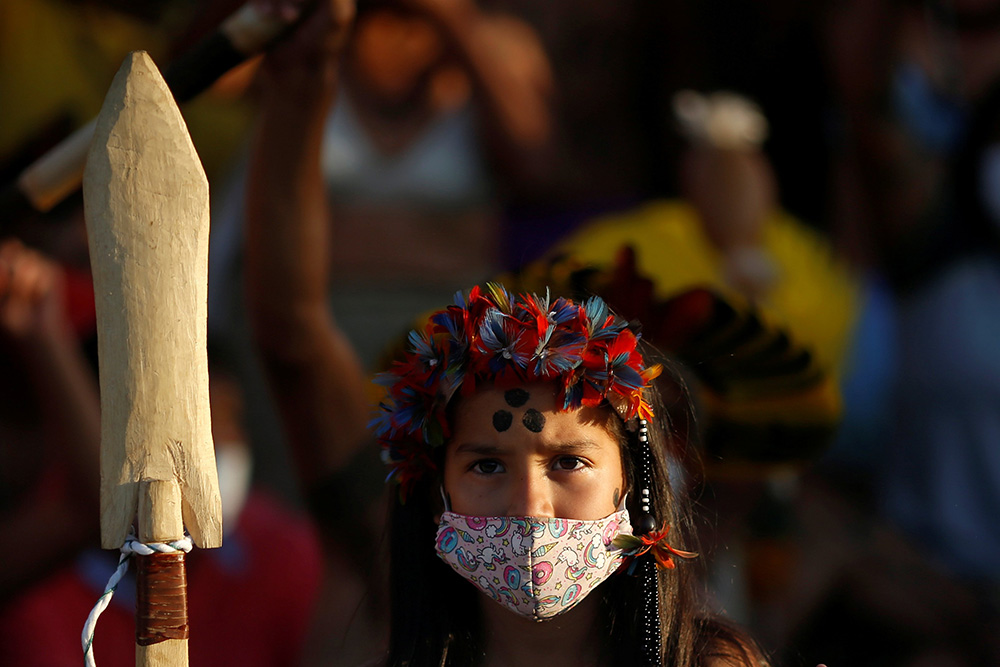 A young Indigenous person takes part in a protest for land demarcation and against Brazilian President Jair Bolsonaro's government, outside the supreme court in Brasília June 18, 2021. (CNS/Reuters/Adriano Machado)

While a growing number of Brazilians are worried about climate change and the devastation of the Amazon, environmental issues do not always top their lists of reasons for choosing a presidential candidate. But a few segments of the population, Catholics included, have been attributing more relevance to such matters — and may have a chance to raise awareness among voters within the months leading up to the election this fall.

In October, Brazilians will decide if the right-wing President Jair Bolsonaro, a Catholic whose first tenure has been tainted by environmental scandals, will get another four years. His major opponent, according to polls, is former President Luiz Inácio Lula da Silva, a left-winger whose previous administrations spanned from 2003 to 2010.

Ahead of the election, the political polarization in the country between Bolsonaro's supporters and progressives has been reaching a tense level, but most of the political arguments used by both sides deal with the economy, corruption scandals and the president's mismanagement of the COVID-19 pandemic, which resulted in more than 660,000 deaths.

"Historically, polls showed that environmental issues are frequently deemed secondary in comparison to topics like public security and unemployment," affirmed Renan William dos Santos, a researcher at the University of São Paulo who investigates the relations of Christians with environmentalism.

"Now, with the growing inflation and Bolsonaro's disastrous actions during the pandemic, we can consider that the environmental concerns will not be ignored, but will probably become even more secondary," he argued. 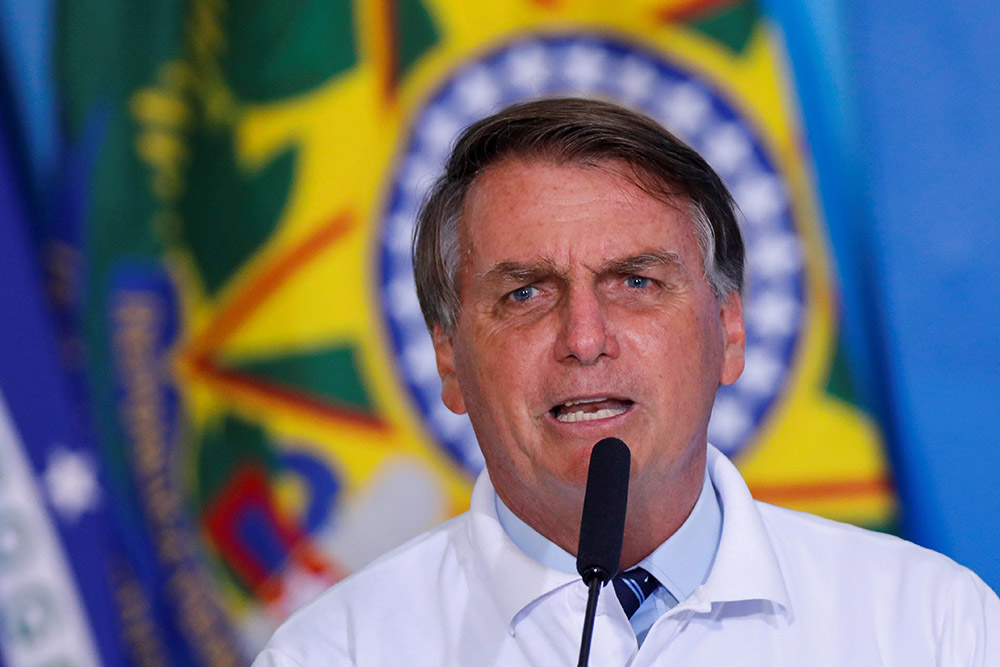 Dos Santos pointed out that lately environmental themes have been debated only in their connection to foreign affairs. Since 2019, when a record number of wildfires swept across the Amazon, French President Emmanuel Macron has declared several times that France would not ratify a trade agreement between the European Union and Mercosur, the South American common market, if Brazil kept devastating the rainforest.

Bolsonaro has been accused by the opposition of harming the country's foreign trade with his negligence with the environment.

"Themes regarding the necessary investment in environmental policies and their connections to health, for example, have been rarely mentioned," dos Santos added.

But that does not mean that Brazilians do not worry about the environment. In fact, a survey carried out by the Institute for Technology & Society of Rio, the Brazilian polling organization IPEC and the Yale Program on Climate Change Communication showed that 96% of Brazilians believe that climate change is real. And 77% consider that it is mostly caused by human action.

Almost 80% of the Brazilian people favor protection of the environment even if it results in lower economic growth and less jobs, according to the study. Seventy-five percent of respondents think that wildfires in the Amazon have been provoked by human action.

Those figures alone demonstrate that the environment may be comparatively less important for Brazilians during elections but not as a whole — which may be a scenario generated by the history of the electoral dynamics in the country. Still, the survey shows that preservation is not out of voters' minds. 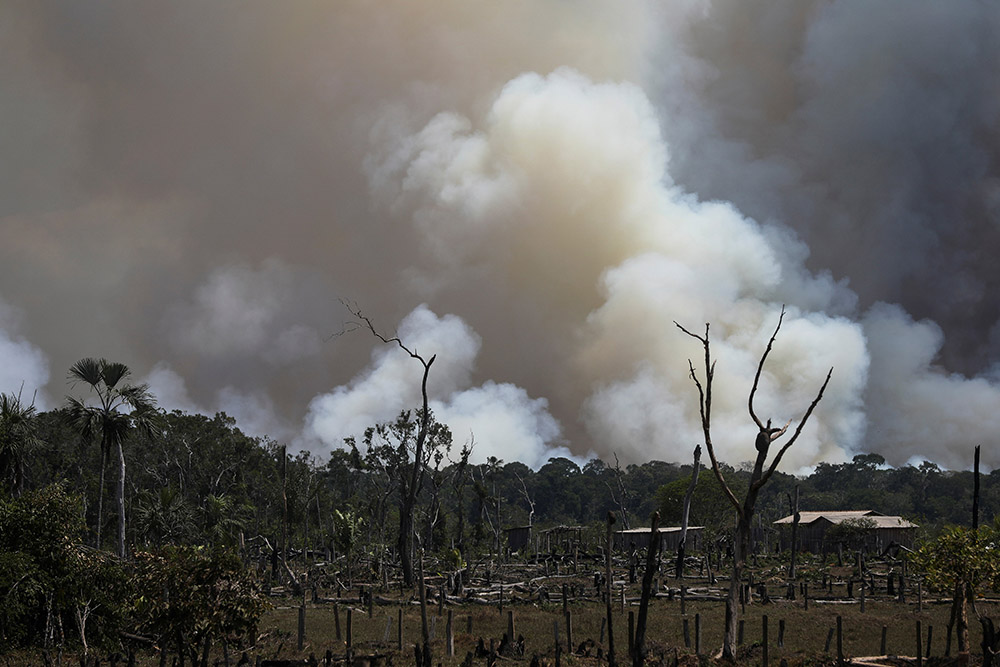 Half of Brazilians think the government is the entity that can be most helpful in resolving the problem of Amazonian wildfires. Forty-five percent even declared that they have already voted for a politician due to their platform for the environment.

"Numerous groups have been working to raise awareness on environmental protection in Brazil over the past decades. Such effort may be many times forgotten by the media, but there is a growing environmental consciousness among Brazilians nowadays," affirmed Sr. Maria Inês Ribeiro, a member of the Messengers of Divine Love and the president of the Conference of Religious of Brazil.

Ribeiro pointed out that many Catholics may be especially receptive to such an agenda, considering Pope Francis' continuous effort to spread the message of integral ecology and care for our common home.

In April, the Pan-Amazon Ecclesial Network (known as REPAM in Portuguese) launched a campaign to incentivize Catholics to vote for candidates who are committed to the protection of the Amazon. Named "I vote for the Amazon," the initiative's goal is to reach parishes and communities all over the country, including areas that are distant from the rainforest.

"We know that we will not have a great impact, but that is a seed that we are planting. And those are stubborn seeds, which will struggle to fructify," Archbishop Roque Paloschi of Porto Velho, REPAM's secretary, told EarthBeat. 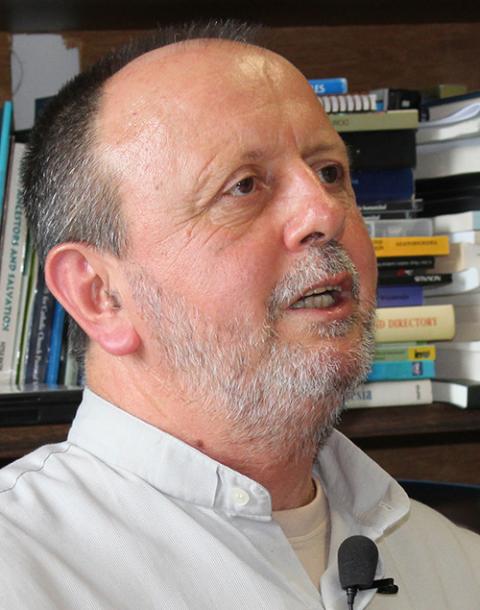 The campaign emphasizes that the Amazonian peoples must be heard by politicians and businessmen whose decisions impact the rainforest.

"We are not against the development of the Amazon. But we do not want a development model that causes environmental damage while concentrating income in the hands of a small group," Paloschi added.

REPAM's initiative is the most recent effort to stress the importance of environmental protection, something that the Brazilian church has been doing over the past few decades. Such efforts have impacted the way many churchgoers think about that theme.

"Several fraternity campaigns [annual Lenten drives to collect funds for the church's social works] dealt with the environment. And the ecological pastoral ministries have been seeing a huge growth over the past few years," dos Santos said.

José Eustáquio Diniz Alves, a demography expert who worked at the Brazilian Institute of Geography and Statistics, emphasized that the pope's encyclical "Laudato Si', on Care for Our Common Home" almost extinguished climate change denialism among Brazilian Catholics, and his firm stance for integral ecology influences many.

"That is why there is a considerable difference between Catholics and Protestant evangelicals concerning environmental issues," he said.

In the second round of the 2018 election, 70% of evangelicals voted for Bolsonaro, something that according to Alves made the difference and ended up giving him the victory. Since then, evangelical politicians and many leaders of megachurches have kept supporting Bolsonaro, and evangelical churchgoers continue to be an important part of his constituency.

"Many evangelicals have continually declared their support to Bolsonaro without ever expressing any criticism of his environmental policies. If they had any commitment to those issues, they would at least present a caveat, but that has never happened," Alves added.

That difference between Catholics and evangelicals regarding the environment results in the fact that Catholics tend to be more prone to take a candidate's environmental platform into consideration than are evangelicals, dos Santos affirmed. 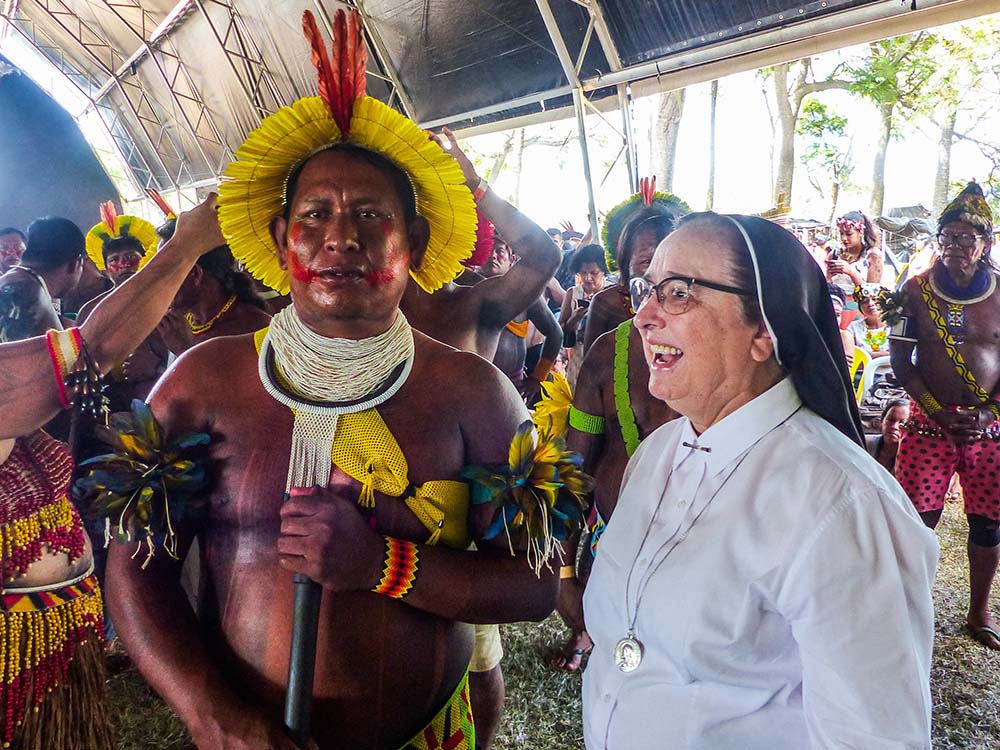 But many in the church who work with environmental issues believe that such an agenda still has to be expanded among Catholics. Ribeiro emphasized, "The Catholic world is very polarized, with strong fundamentalist groups that many times ignore the church's path, the pope's guidance, and the Brazilian bishops' conference."

Jesuit Fr. Paulo Tadeu Barausse, who directs the Amazonian Service of Action, Reflection, and Socio-Environmental Education (known as SARES in Portuguese), lamented that many Catholics — even members of the clergy — have not read Laudato Si' and "keep a conservative view of Catholicism, distant from such issues."

"Those topics used to be dealt with by basic ecclesial communities [a popular movement in Latin America during the 1970s and 1980s, connected to liberation theology], but we gradually lose space to traditionalists," he said.

Now, Francis has brought those issues back to the surface, "but many people are too disconnected from them."

"In the countryside, people who live under the influence of agribusiness just cannot see the harm such models cause to the land, the rivers, the atmosphere. They believe it is necessary to develop the economy," he added. Most of them support Bolsonaro.

At the same time, Indigenous groups, riverine communities and small farmers who suffer the consequences of the contamination of the water by pesticides, for example, are much more conscious of the need to protect nature.

"In the three years during which the church prepared the synod for the Pan-Amazon region [which happened in 2019], we could hear thousands of members of the different Amazonian peoples denouncing their destruction of the rainforest," Barausse said.

In his opinion, the synod's legacy is still relevant for the debate on conservationism, particularly among Catholics.

Franciscan Br. Rodrigo Péret, a member of the Inter-Franciscan Justice, Peace and Ecology Service, affirmed that one of the greatest difficulties nowadays is to help people understand that environmental issues should not be disassociated from social, economic and political aspects.

"People may oppose violence against Indigenous groups, but at times do not understand that allowing mining operations in their territories will lead to more violence," he said, mentioning a bill currently being analyzed in Congress that aims at legalizing mining and other activities in Indigenous territories.

For vast segments in society, it is not easy to explain that the Bolsonaro administration has loosened the environmental legislation over the past few years, something that led to weaker monitoring and greater devastation, Péret said.

"At the same time, I do not think that anyone in Brazil doubts that we are facing serious problems in the Amazon. So, I believe those topics may have some influence in the elections," he argued. 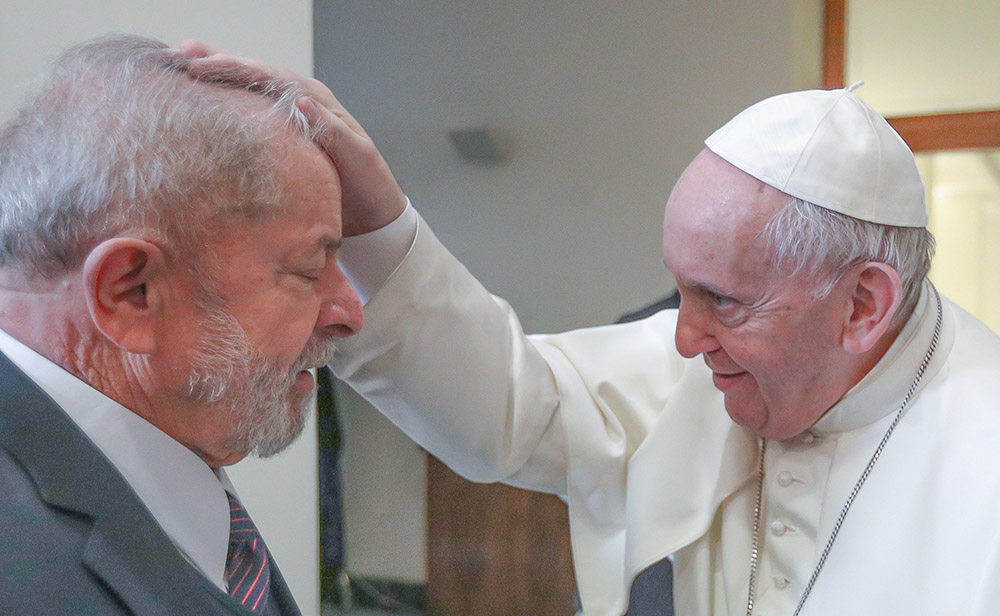 Theologian Leonardo Boff, a longtime member of the liberation theology movement who has authored several books on ecological issues, affirmed that the Brazilian people are not blind to the great devastation seen during Bolsonaro's administration — a devastation that is "the consequence of dismantling all institutions that used to take care of the environment."

"All those facts are known by the people and will be critically used against him during the electoral campaign. They will certainly have a negative impact for Bolsonaro," Boff argued.

Demographer Alves pointed out that Lula da Silva has a large majority of the Catholic vote today. In the most recent poll, conducted by PoderData April 10-12, he received 47% of support among Catholics, while Bolsonaro got only 29%. (Among evangelicals, Lula da Silva was supported by 24% and Bolsonaro by 53%.)

"One cannot tell the reasons why Catholics prefer Lula da Silva, but their concern with the environment is certainly bigger than the evangelicals', so they are more critical of Bolsonaro," Alves said.