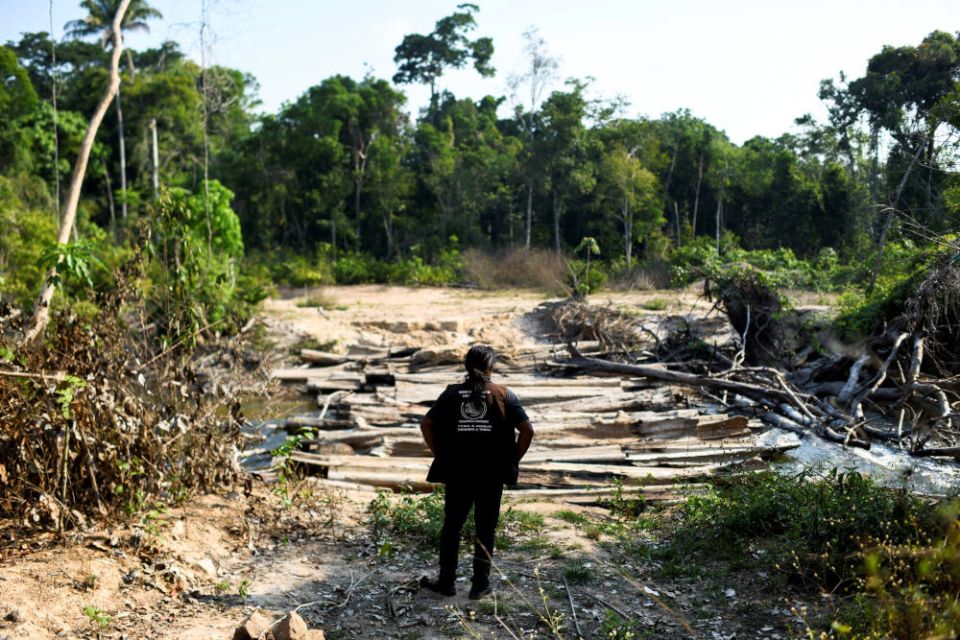 Pahnin Mekragnotire, a 40-years-old Indigenous man of the Kayapo tribe, observes logs left by loggers during a surveillance patrol on the Menkragnoti Indigenous Land to defend the territory against attacks by loggers and miners, in Brazil's Para state, in this Sept. 7, 2021, file photo. (CNS photo/Lucas Landau, Reuters)

"This ... was the most disastrous in the country's history," said Archbishop Roque Paloschi of Porto Velho, president of the council, known by its Portuguese acronym as CIMI. The archbishop presented the report, "Violence Against Indigenous Peoples of Brazil: Data from 2021," Aug. 17 at the bishops' conference headquarters in Brasilia.

The increase in invasions and attacks against Indigenous communities and leaders and the intensification of conflicts reflected "the institutional environment of offensive against the constitutional rights of native peoples," said the document. According to the report, invasions and mining on Indigenous lands have increased by 180% since Jan. 1, 2019, when President Jair Bolsonaro took office.

It said that in the Yanomami Indigenous Land, for example, where more than 20,000 miners work, invaders began to carry out systematic armed attacks against Indigenous communities, spreading a climate of terror and causing deaths, including those of children.

These invaders also served as a vector for diseases such as COVID-19 and malaria, infecting the Yanomami population, said the report.

It criticized a series of legal actions, such as the certification of private properties on Indigenous lands not yet officially demarcated by the government, a proposal that makes new demarcations unfeasible. It also criticized a project by the federal government that would allow mining on Indigenous lands, which CIMI said gave the invaders confidence to advance in their illegal actions.

"Mining sites developed extensive infrastructure, invaders expanded the deforestation of forest areas to open pastures and plant crops, and hunters, fishermen and loggers intensified their incursions into the territories," said the report.

It noted that despite several actions by the federal public ministry, this was the third year Bolsonaro "fulfilled his promise not to demarcate any Indigenous lands."

During the presentation, Rio de Janeiro Auxiliary Bishop Joel Portella Amado, secretary-general of the bishops' conference, said it was necessary to present the truth about what is happening with Indigenous peoples in Brazil, "even if this translates into pain and deaths." He said the way Brazil treats its Indigenous peoples says a lot about the nation.

"A country is judged by its ability to protect its sons and daughters. In a country where there is violence and death, the status of protector is highly questioned," said Bishop Amado.

This is the sixth consecutive year that the survey has recorded an increase in the number of cases of violence against Indigenous peoples.

"Every year we want to cry, we have a revolt in our chest, heart and head. Every year we would like Brazil, the people, society, farmers, politicians, the military to treat Indigenous peoples differently," said Lucia Helena Rangel, one of the organizers of the report.