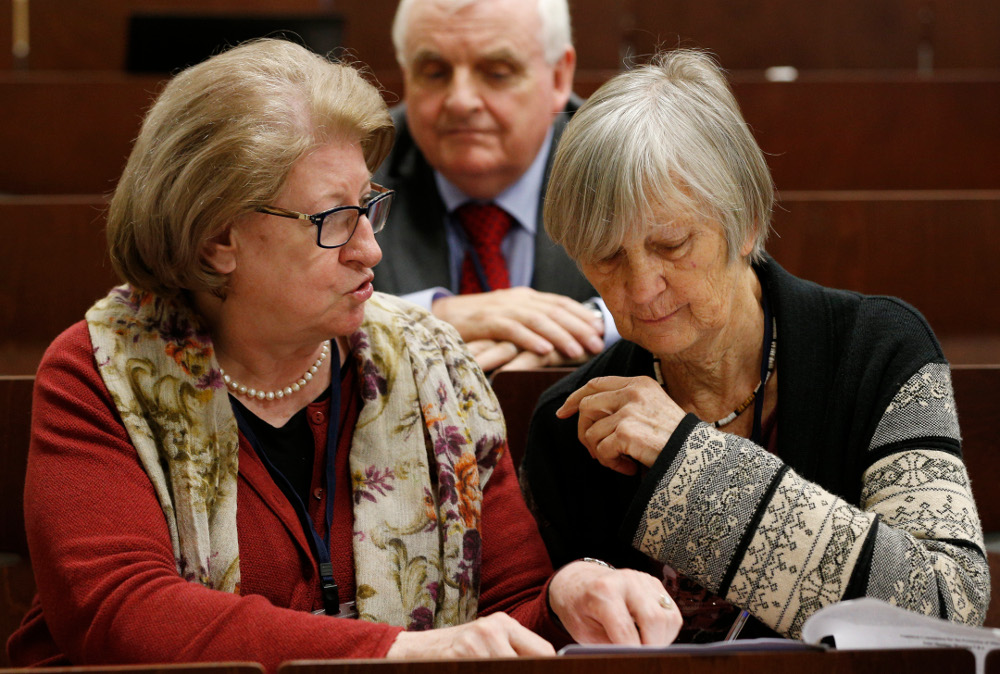 Hanna Suchocka and Dr. Catherine Bonnet, both members of the Pontifical Commission for the Protection of Minors, talk during a seminar on safeguarding children at the Pontifical Gregorian University in Rome March 23. Also pictured is commission member Bill Kilgallon. (CNS/Paul Haring)

It is distressing to learn that the Pontifical Commission for the Protection of Minors may be restructured so that survivors of sexual abuse by clergy may have no direct voice in that body. The commission has helped the church make great strides in addressing this global issue, but it is in danger of becoming irrelevant.

Signs of trouble with the commission began to surface in 2016, a year after its inception, when one of two abuse survivors on the commission, Peter Saunders, was suspended. The trouble became acute when the sole remaining survivor on the commission, Marie Collins, resigned earlier this year.

Collins resigned because she felt Vatican bureaucracy was neglecting and stalling the work of the commission. The commission is understaffed, underfunded and not accepted by offices at the Vatican that should be working with it, Collins said. Her statements have been reinforced by fellow commission member Krysten Winter-Green in an interview with NCR.

When Pope Francis announced the creation of this commission in June 2015, we greeted it as “a new phase in abuse crisis.”

“For the first time, there is clear evidence that the people’s cry for justice and action has reached the pope and his closest advisers,” we said.

We were told at that time that, on the recommendation of his nine-member Council of Cardinals, a tribunal would be established to judge bishops who mishandle cases concerning the sexual abuse of children, on charges of “abuse of office.”

“Never before has the language describing the mishandling of these cases by bishops — and by extension their diocesan officers — been so strong,” we said.

Regrettably, that tribunal never came to be. We were told two years later that what was announced wasn’t an approved plan, but was rather enthusiastic encouragement from the pope to begin a discussion of possibilities. Why the world — including pontifical commission members — thought a papal announcement said one thing but meant another and why it took two years for the clarification to be made is an example of the intransigence and obfuscation that drove Collins from the commission.

The Pontifical Commission for the Protection of Minors began well and has made huge contributions in educating Catholics across the globe about the issue of abuse of minors and vulnerable adults. It has given many people the tools to address the issue. The job entrusted to the commission is too important to the life of the church to allow the body to fade into irrelevance.

To prevent irrelevancy, the commission must ensure that survivors have direct participation in its work and the commission itself needs a strong, public endorsement by Francis.