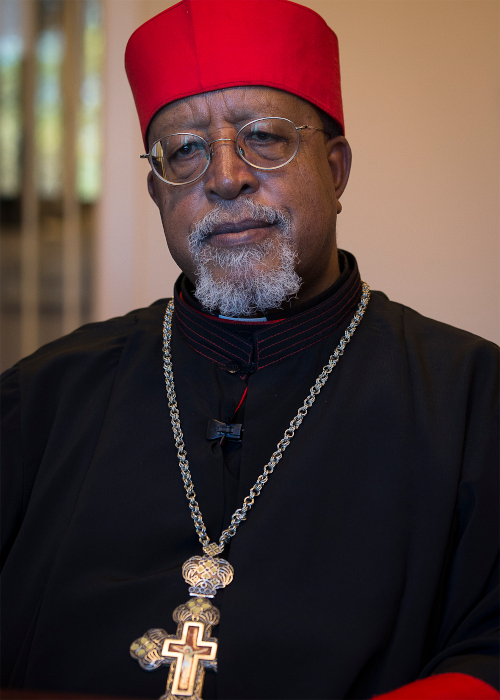 Ethiopian Cardinal Berhaneyesus Souraphiel is seen at the headquarters of the U.S. Conference of Catholic Bishops in Washington Oct. 24, 2019. (CNS/Tyler Orsburn)

Ethiopia is now managing nearly a million refugees from South Sudan, Somalia, Eritrea, Sudan, Yemen and even Syria, said Ethiopian Cardinal Berhaneyesus Souraphiel. Because so many Ethiopians are refugees, those who remain in the country work to make newcomers feel welcome.

The cardinal, who visited Washington in late November, said his country had been "a country of hospitality, a country of open doors to migrants and refugees who suffer in other parts of the world. And if a poor country shares meager resources she has with migrants and refugees, how much more should the richer countries (do). Because one day, you might be a refugee or a migrant yourself."

"I was surprised when I saw Syrian refugees in Addis Ababa and Ethiopia," he added. "I don't know how they arrived, the mothers arrived from Syria, and they have written on their chests in Amharic ... 'We are Syrians, we have come from Syria, please help us.'"

In separate interviews with Catholic News Service and with Catholic Standard, newspaper of the Archdiocese of Washington, Souraphiel told of how the church is helping refugees and how the country's poverty is forcing people to emigrate from their homeland.

Souraphiel said the church is his country "is very much open to receive the refugees." He said besides the Ethiopian Catholic Secretariat, the church works with international agencies such as Jesuit Refugee Service, Catholic Near East Welfare Association, Caritas and affiliated agencies such as the U.S. bishops' Catholic Relief Services. Sisters of the Missionaries of Charity especially help with trauma counseling, he said.

When refugees arrive, church workers want "to let them know that they are welcomed" and get them registered with the United Nations refugee agency, UNHCR. If refugees register with a parish, they have access to Catholic education and Catholic health services.

"Ethiopians themselves are refugees in other countries in some areas. So they know the need of refugees," he said. Ethiopians "have sympathy and empathy for refugees and also people on the move.

"They never had grudges with refugees, and that is why I think Ethiopia is blessed by the Lord."

Part of what drives young people to become refugees is poverty, and that is the biggest challenge facing the church, the cardinal said.

"We live with the poor and we stay with them. Wherever they are, we try to be the voice of the disadvantaged, the displaced people," he said. The church especially tries to help "abandoned children, and also mothers who suffer because of the big burden of taking care of the family, which they bring with them when they migrate from their own villages to the cities."

As of May, more than 2.8 million Ethiopians were displaced within their country. As of 2018, Ethiopia's unemployment rate was more than 19 percent.

Economic growth on the national level "might not trickle down to the poor," so millions of unemployed young people — including those with college degrees — want "to go abroad, especially to the Arab world and to South Africa and to Europe."

"Their aspiration is to escape the networks of poverty and change their own individual lives and the lives of their family members," he said. And although many do, the majority struggle. They may end up abused, and many return home.

Church leaders try to encourage people to have hope, "especially the youth," and they work with them to try to find employment within the country.

The cardinal said he is disturbed when he hears of Europeans closing their borders.

"This is not biblical; it's not Christian," he said.

He noted that the United States also is also a country of migrants and refugees.

"This has been what has made America a special country ... to be a home for persecuted persons or for persons who looked for refuge from violence in their own countries," he said.

He said Christians and Muslims were very moved when, in March, Pope Francis kissed the feet of politicians from South Sudan.

"Each politician whose feet was kissed — behind him are millions of refugees," he said. The gesture was "to prick their conscience, to say to them, 'You are responsible for the suffering of millions of mothers and children and elders because of, say, love of wealth and political power."

"He did that just by bending down and kissing the feet, not by many other words.