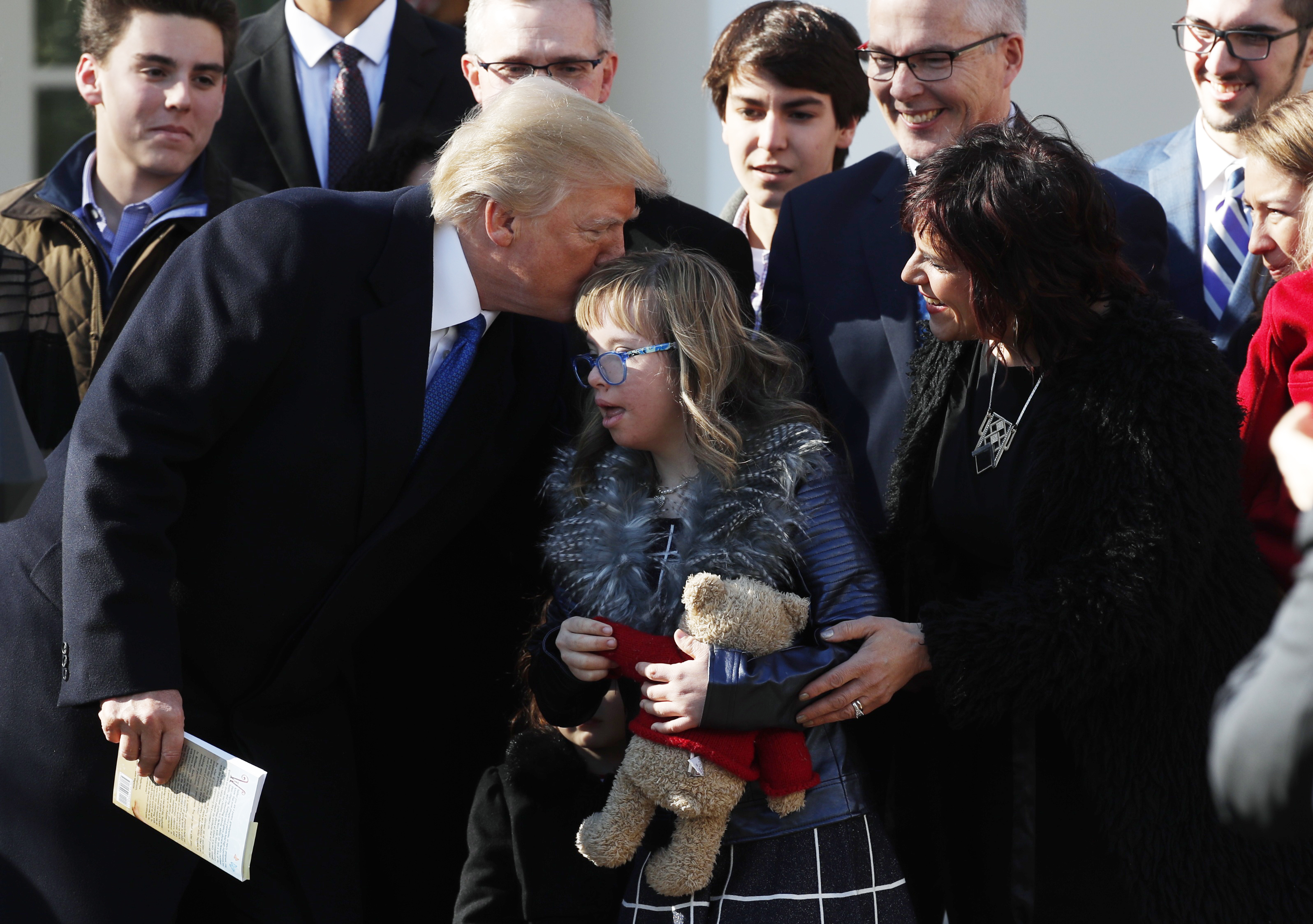 President Donald Trump greets a girl after addressing attendees of the annual March for Life rally from the Rose Garden of the White House in Washington Jan. 19. The live feed was projected onto a large video screen during the rally on the National Mall. (CNS/Tyler Orsburn)

In remarks broadcast to the March for Life from the White House Rose Garden, President Donald Trump said that his administration "will always defend the very first right in the Declaration of Independence, and that is the right to life."

He invoked the theme of this year's march, "Love Saves Lives," and praised the crowd as being very special and "such great citizens gathered in our nation's capital from many places for one beautiful cause" -- celebrating and cherishing life.

"Every unborn child is a precious gift from God," he said, his remarks interrupted several times by applause from the crowd gathered on the National Mall. He praised the pro-lifers for having "such big hearts and tireless devotion to make sure parents have the support they need to choose life."

"You're living witnesses of this year's March for Life theme, 'Love Saves Lives,'" His remarks were broadcast to the crowd live via satellite to a Jumbotron above the speakers' stage, a first for any U.S. president, according to March for Life.

During their tenure in office, President Ronald Reagan, President George H.W. Bush and President George W. Bush all addressed the march via telephone or a radio hookup from the Oval Office, with their remarks broadcast to the crowd.

Trump spoke with a crowd surrounding him in the Rose Garden, including 20 students from the University of Mary in Bismarck, North Dakota. One of those standing next to the president was a Marianne Donadio, a top official with Room at the Inn, a nationally accredited Catholic ministry based in North Carolina that serves homeless, pregnant women and single mothers with children.

Vice President Mike Pence, who addressed last year's March for Life in person at Trump's request, introduced the president as the "most pro-life president in American history," for among other things issuing an executive memorandum shortly after his inauguration to reinstate the "Mexico City Policy." The policy bans all foreign nongovernmental organizations receiving U.S. funds from performing or promoting abortion as a method of family planning in other countries.

Trump also has nominated pro-life judges to fill several court vacancies and a day before the March for Life the U.S. Department of Health and Human Services announced formation of a new Conscience and Religious Freedom Division in the HHS Office for Civil Rights. Its aim is to protect the conscience rights of doctors and other health care workers who do not want to perform procedures they consider morally objectionable.

For the first time in a recent memory, the weather in Washington was more than tolerable for March for Life participants as they gathered on the National Mall to mark the anniversary of the 1973 U.S. Supreme Court decision legalizing abortion. The sun was shining and the blue sky was cloudless. By the time the speeches ended and the march to the Supreme Court started, the temperature had reached 50 degrees.

Jeanne Mancini, president of March for Life, opened the rally by calling on everyone in the crowd to text the word "March" to 7305 and to show their commitment to ending abortion and join their voices in calling on Congress to defund Planned Parenthood.

"Do you agree that's important?" she asked the crowd. "Yes!" they shouted. March for Life, she said, is about educating people about abortion and mobilizing to end it and to love all those women and families who are facing a troubled pregnancy and other needs.

"'Love Saves Lives' is this year's theme," she added. "Love and sacrifice go hand in hand It is not easy. No one ever said it was, but it is the right choice ... the self-sacrificial option."

House Speaker Paul Ryan, R-Wisconsin, was among several others who addressed the crowd.

"Thank God for giving us a pro-life president in the White House," the Catholic congressman said.

"Your energy is so infectious," he told the crowd, praising them for being "the vigor and enthusiasm of the pro-life movement."

Rep. Jaime Herrera Beutler, R-Washington, gave an emotional speech about the troubled pregnancy she faced about four years ago. She and her husband, Dan, were told their unborn child had severe defects, that the baby's kidneys would never develop and the lungs were undeveloped because of a rare condition. Abortion was their only option, they were told.

Today, that baby is 4-year-old Abigail. She and her younger brother and their father stood on the stage with the congresswoman.

"Dan and I prayer and we cried (at the news of their unborn child's condition) ... and in that devastation we saw hope. What if God would do a miracle? What if a doctor was willing to try something new? Like saline infusions to mimic amniotic fluid so kidneys could develop?" she recalled.

With "true divine intervention and some very courageous doctors willing to take a risk we get to experience our daughter, Abigail," Herrera Beutler said. She is a very "healthy, happy 4-year-old big sister who some day is going to be 'the boss of mommy's work,'" she said.

Herrera Beutler asked the crowd to imagine that 45 years of legal abortion had not existed and that 60 million babies had not been lost to abortion, and if out of those people had come those who could cure cancer and correct all manner of disabling conditions, including those that exist in utero, and eradicate poverty.

"What richness we would we get to see instead of two generations missing," she added.

"Every one of you here today" and millions of others throughout the country and world, he said, "are an integral part of the greatest human rights struggle on earth. Because we pray, because we fast, we will win. Babies will be protected."