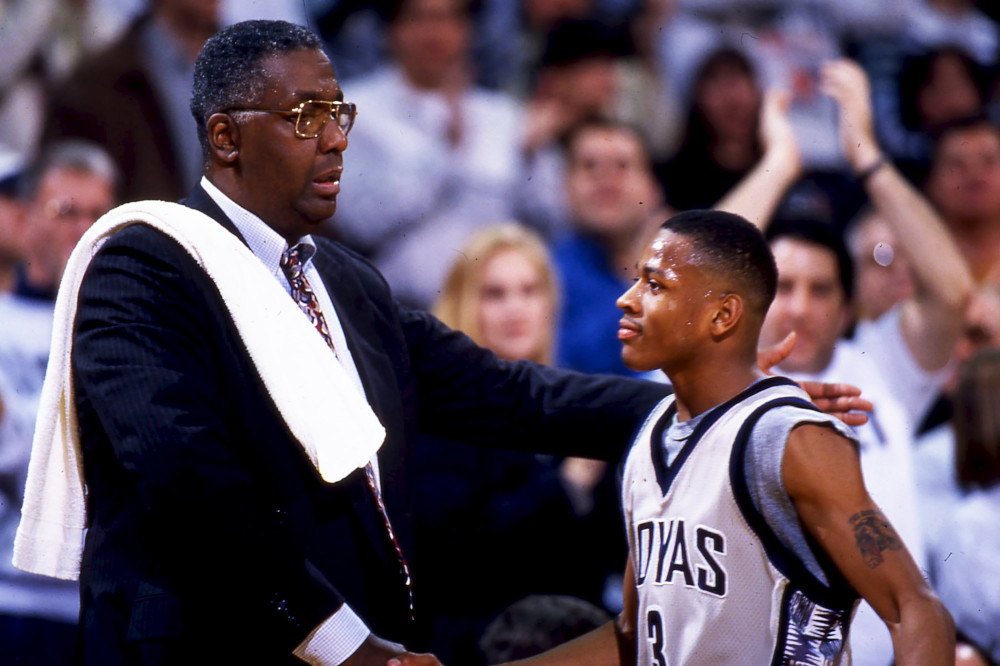 John Thompson, the Hall of Fame college basketball coach who guided Georgetown University in Washington to a national championship in 1984, died Aug. 31 at age 78. No cause of death was given.

He was the first African American to win a national championship in a major college sport when he took the 1983-84 Georgetown Hoyas to the NCAA Division I men's basketball title. In 26 full years of coaching at Georgetown, he led the team to the NCAA tournament 20 times, including 14 years in a row and three trips to the Final Four in a four-year span.

Thompson, born and raised a Catholic, went to Catholic schools in his hometown of Washington. He excelled in basketball at Archbishop Carroll High School in Washington, which fielded one of the first integrated squads as the archdiocese had not long before announced that its schools would be open to all races.

As the team's center, the 6-foot-10 Thompson helped Archbishop Carroll mount a 48-game winning streak and appear in three straight city championship games. One of his teammates was Edward "Monk" Malloy, who later became a Holy Cross priest and president of the University of Notre Dame.

At Providence College, Thompson continued to excel, leading the Friars to the National Invitational Tournament championship in 1963, when the NIT rivaled the NCAA tourney for prestige. He also helped secure Providence's first NCAA bid in 1964.

Drafted by the Boston Celtics, he backed up Bill Russell — arguably one of the greatest players of all time — for two seasons. The Celtics won the National Basketball Association championship both years.

Retiring from the pro game in 1966, Thompson coached the boys' basketball team at St. Anthony High School in Washington for six seasons, helming them to a cumulative record of 126-22.

In 1972, Fr. Robert J. Henle, then president of Jesuit-run Georgetown, hired Thompson as its men's basketball coach. At Georgetown — the only college where Thompson coached — he had a record of 596-239, including 196-110 in the Big East, one of the premier college basketball conferences in the 1980s and '90s. Over 19 Big East seasons, Georgetown in nine of those seasons won either the conference championship, the tournament championship, or both, never finishing lower than a fifth-place tie. 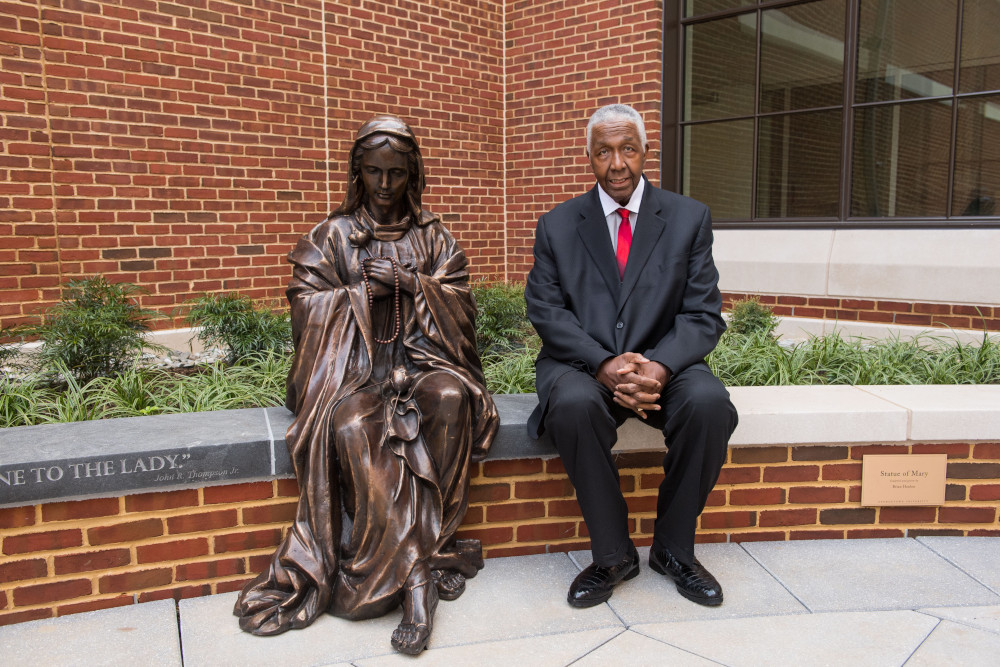 John Thompson Jr., former basketball coach for Georgetown University, is seen sitting next to a statue of Mary praying at the Catholic college's Washington campus Oct. 6, 2016. Thompson, who led Georgetown to the 1984 national championship, died Aug. 31, 2020, at the age of 78. (CNS/Courtesy Georgetown University/Phil Humnicky)

Yet despite his success on the court, Thompson took stands that many at the time regarded as unpopular.

In one 1999 game, he walked out of a home game against Boston College to protest a newly passed rule that would deny athletic scholarships to youths not meeting certain academic standards, arguing the standards being proposed were based on racially biased standardized tests.

Thompson that year also took on notorious Washington drug kingpin Rayful Edmond, himself a major presence at Georgetown home games, warning him to drop all contact with Georgetown players. Edmond, whose drug ring had been cited in the murder of dozens of drug figures in the 1980s, complied with Thompson's demand.

After leading Georgetown to a 7-6 start in 1999, Thompson abruptly quit, citing problems in his marriage. He had filed for divorce two years prior.

The school's basketball program continues to resonate from Thompson's influence. Immediately succeeding him was Craig Esherick, one of Thompson's assistants. After Esherick came John Thompson III, the coach's son. After Thompson III was let go, Georgetown hired one of his father's star players from the Hoyas' NCAA championship team, Patrick Ewing.

After coaching, Thompson took to the airwaves, doing commentary for college games on cable television and hosting his own radio show on a Washington sports-talk station, which he continued until 2012. With his own platform weekdays for a dozen years, Thompson continued to take uncompromising stands on matters of racial justice in sport and society.

"John will be remembered for many things — his historic achievements, the lives he shaped, his advocacy for social and racial justice — but perhaps most of all, for the authenticity through which he lived his life," he added.