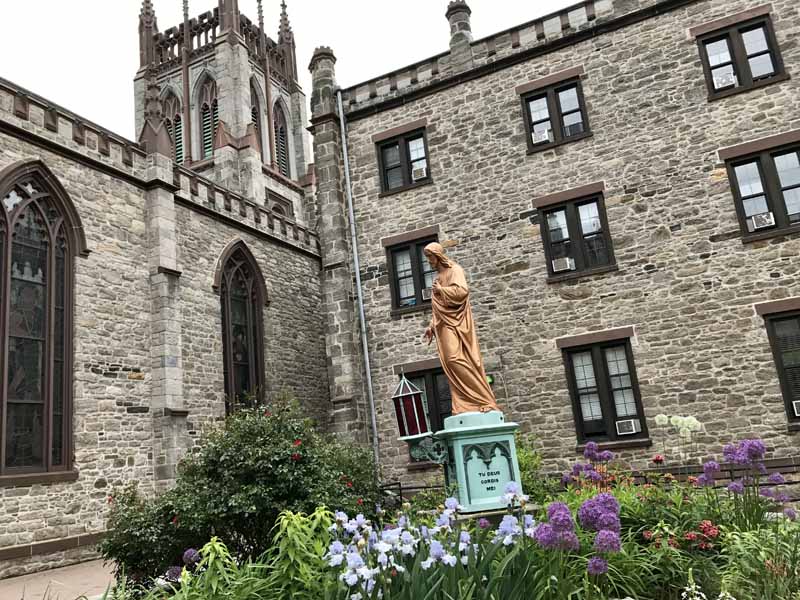 The Bronx, New York, campus of Fordham University on May 24 (Menachem Wecker)

On Oct. 27, the National Labor Relations Board mailed paper ballots to non-tenure track faculty at Fordham University. The adjunct and full-time, non-tenure track professors and postdoctoral fellows had until Nov. 13 to vote whether to unionize with the Service Employees International Union Local 200United. When the National Labor Relations Board​ tallied the ballots the following day, those who voted "yea" had won the day.

"We crushed the vote with a ratio of 16 to 1, which has got to be some sort of record," said Alessandro King, playwright and adjunct professor teaching in his third semester in Fordham's English department. "I'm looking forward to negotiations with the administration, during which we will continue to prioritize the needs of students and faculty."

A month ago, King observed very high faculty morale. "There is a palpable sense of energy and excitement amongst contingent faculty, supplemented by cacophonous encouragement from community members ineligible to vote," he said then. Hundreds of conversations with longtime educators and new colleagues had revealed a "passion for the union movement."

But the win — which union proponents have now delivered — is just the first step, according to King. True victory will be sitting at the table with the administration and having "a real voice on campus to advocate for ourselves and our students," he said.

"After a full and fair election process, the non-tenure-track faculty have voted to be represented by the Service Employees International Union," said Bob Howe, Fordham's assistant vice president for communications and special adviser to university president Jesuit Fr. Joseph McShane, in an email to NCR. "The university leadership looks forward to working with SEIU on behalf of our employees."

Nick Leshi, an adjunct professor in the communications department, expressed gratitude to the support non-tenure faculty received from the broader community. "I hope the goodwill shown by the Fordham administration and Father McShane during this process continues as the union begins negotiating our first contract."

Leshi is sure the new development is the beginning of a "great partnership that will strengthen even more the already-strong Fordham community." But that relationship had some growing pains along the way.

Tension mounted between the administration and faculty and students, and although McShane issued a letter on May 19 stating that Fordham wouldn't contest non-tenure faculty's efforts to unionize, some contended he acted to avoid demonstrations the following day at graduation. This came after 80 percent of the faculty had voted at a rate of 88 percent that it had no confidence in McShane. A hashtag on Twitter at the time referred to "McShame."

The recent vote results represent "a clear statement from contingent faculty that they want a say in their working conditions, which they now consider unacceptable, unjust and exploitative," said Hannah Jopling, an adjunct cultural anthropology professor who joined Fordham in 2005.

A vote to unionize would mean "a more socially just workplace for all of us, something Fordham can be proud of," Jopling said shortly before the ballots were mailed.

"I hope our success story here, including the administration's neutral stance, will be replicated at other institutions, especially fellow Jesuit schools that share our mission of social justice."

Hannah Allison, who has taught graduate social work course at Fordham since 2016, said prior to the vote that she is proud — as a social worker who teaches students how ordinary people can effect powerful change through community and labor organizing — to be part of the social justice movement for unionization on campus.

"I care deeply about supporting students to succeed and about social work as a discipline, but if I don't know from semester to semester which class I will be teaching or if I'll even have a job, it's hard to build the kind of classroom and departmental environment that really allows students to thrive," she said at the time. "I truly believe that when we come together as co-workers to support each other by forming a union, we can improve not just our lives but the lives of our students and the life of our department as a whole."

It took a lot of organizing and momentum building to get beyond the administration's initial disappointing effort to block the unionization vote, she said, but the silver lining was the camaraderie that forged between students, alumni and faculty.

King sees a broader takeaway for other Catholic schools: "I hope our success story here, including the administration's neutral stance, will be replicated at other institutions, especially fellow Jesuit schools that share our mission of social justice," he said.

State Sen. George Latimer of New York, a Catholic and a Fordham alumnus whose district includes the university, congratulated the union proponents, per an SEIU press release. "I believe that the non-tenure track faculty will be very well served by this monumental decision," he said.

Latimer, a Democrat, told NCR that he doesn't, of course, legislate solely based upon his personal beliefs.

"As a Catholic, I truly believe that I must look out for my fellow men and women," he added. "I believe that asking people to work for unfair wages and benefits is greed. No one should be robbed of the value of their labor."