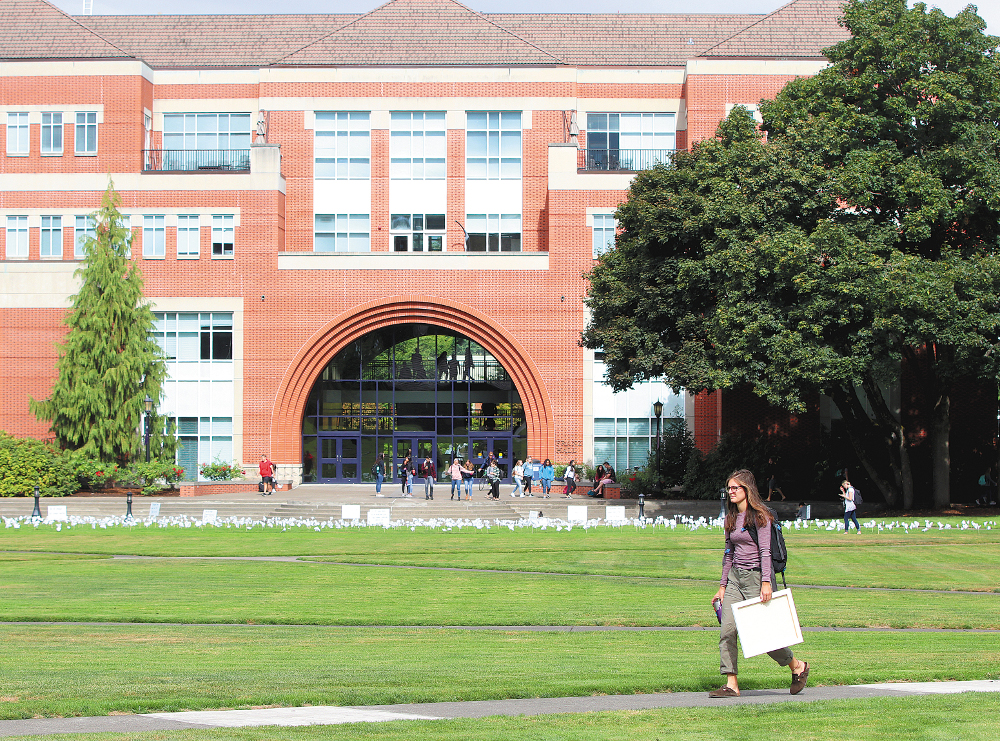 A student walks across the campus of the University of Portland, Ore., Sept. 10. A former president of the university, 1978-1981, Holy Cross Br. Raphael Wilson was ordained a priest years later for the Diocese of Scranton, Pa. He is listed in the recent grand jury sexual abuse report on six Pennsylvania dioceses. (CNS/Ed Langlois, Catholic Sentinel)

A past president of the University of Portland, Holy Cross Br. Raphael Wilson, is listed in the recently released grand jury report investigating the widespread alleged sexual abuse of children within six Pennsylvania dioceses and claims of a systemic cover-up by senior church officials.

He was accused of sexually abusing two boys and admitted to one of the charges. He reached a $250,000 confidential settlement with the victim, according to the report.

It is unclear when and where the abuse occurred. The brother was university president from 1978 to 1981, and in the 1990s, he was ordained a priest for the Diocese of Scranton, Pennsylvania. He is now 93 years old, according to Fr. Jeffrey Walsh, episcopal vicar for clergy in the diocese.

There is no information to suggest Wilson committed abuse while at the University of Portland or that the university was aware of any allegations while he was employed at the school, according to its current president, Holy Cross Fr. Mark Poorman.

The university "just learned of the allegations when the report was released," Poorman wrote in a campus-wide email sent Aug. 24.

Wilson was a faculty member in biology at the University of Portland from 1976 to 1978, when he was named president. He was widely known for his work with David Phillip Vetter, dubbed the "bubble boy" by the media. Vetter was born in 1971 with severe combined immunodeficiency and lived in a sterile containment system before his death at age 12.

Wilson resigned as university president in 1981 to resume his teaching and research career, according to his resignation letter. The Beacon, University of Portland's student newspaper, posted an online story Aug. 24 about the discovery that the religious brother was listed in the Pennsylvania grand jury report as one of the 300 priests accused of abuse.

According to page 875 of the report, Wilson approached Bishop James Timlin — who was Scranton's bishop from 1984 to 2003 — and requested to be accepted into the diocese. Elsewhere in the report, Timlin is said to have paid a family $75,000 to remain silent about a priest who raped a teenage girl and then forced her to have an abortion.

Wilson was accepted into the diocese, ordained at age 69 and henceforth was known as Fr. Joseph Wilson. The priest served at various parishes in Pennsylvania, including as assistant pastor and chaplain. He was a chaplain at a Catholic hospital in Williamsport when in 2002 the Scranton Diocese learned of the abuse allegations.

"Handwritten notes in the file reflect that in July 2002, the diocese became aware that while Wilson was a religious brother at Holy Cross, there were allegations made that he had sexually abused two boys," states the report. "Wilson admitted to abusing one of the boys and he was sent for evaluation and treatment."

He was removed from ministry in August 2002.

As a brother, he a member of the South-West Province of Holy Cross until he was ordained a priest. In 2011, the Eastern and the South-West provinces formed the new Moreau Province, located in Austin, Texas.

Poorman wrote that the University of Portland takes "proactive steps to protect community members, including the completion of background checks of new employees and searches of the national sex offender registry." It adheres to and has expanded upon Title IX, a federal law requiring universities to follow specific procedures regarding sex discrimination and sexual violence.

It is unclear what protocol existed while Wilson was employed at the university.

Wilson's work appeared in nearly 100 professional journals and other publications and he conducted lecture programs in countries around the globe.

In addition to working with Vetter, Wilson was involved in a similar program in Europe, where twins with intellectual disabilities were successfully treated in sterile isolation.