The Jesuit West Province is celebrating the life of Fr. James Rude, a priest who played a towering role in both spiritual and social justice formation for tens of thousands of people across California and Hawaii. News of his death on March 5 at Sacred Heart Jesuit Center in Los Gatos, California, was posted on the province's website.

Rude was 86 years old, and would have celebrated his 70th anniversary as a Jesuit later this year.

He spent years as a parish priest to the poorest of Los Angeles and San Diego, and ended his career as the director of social justice for the Fresno Diocese. But it was during his years teaching at Loyola High School of Los Angeles, from 1967 to 1978, when he may have had his most profound influence.

He taught Greek and Latin there and served as school chaplain. But in 1968, a group of students, reeling from the unrest through cities across America at the height of the Vietnam War, approached him about starting a club to help them volunteer in the community and serve the poor. 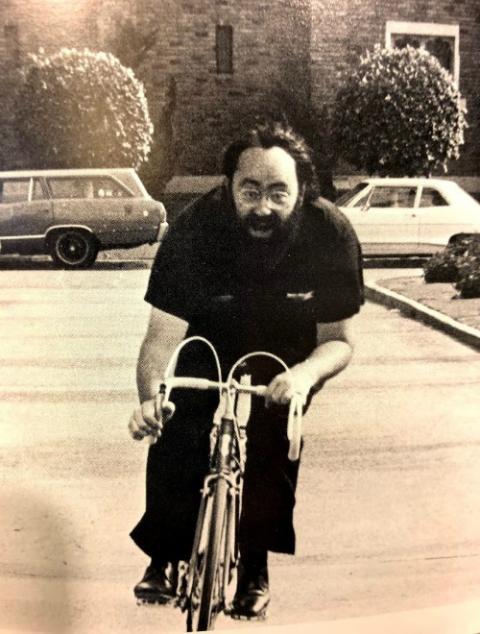 Jesuit Fr. James Rude in 1974: An annual bicycle rally, the CAM-a-thon, involved hundreds of students from Loyola High School and many other schools riding together in a 35-mile loop around the city to raise money for Christian Action Movement projects. (Loyola High School yearbook staff)

Together under Rude's guidance, they founded the Christian Action Movement (CAM). That community service program took hundreds of students downtown to Skid Row to work in the Catholic Worker hospitality kitchen; an acting troupe to perform in retirement homes; student counselors to visit children every week at Juvenile Hall; athletes to befriend young offenders at a high-security camp in Calabasas; and students who parked every morning outside the main County Jail to welcome offenders back into society.

James Anthony Rude was born in Los Angeles July 5, 1933. He was severely injured by a car his freshman year at Loyola High School, nearly losing a leg and missing seven months of school. He likened his experience to that of St. Ignatius Loyola, whose vocation grew out of a severe injury as a young man. Rude entered the Jesuit novitiate at Los Gatos in 1950 and was ordained in 1964.

In April 2019, Loyola High School celebrated the 50th birthday of the Christian Action Movement, with 70 "CAM coordinators" from across the years gathering for a Mass led by Jesuit Fr. Greg Goethals, president of Loyola.

For the occasion, Rude himself wrote an autobiographical reflection in which he described his extraordinary facility with languages — by some counts he spoke more than 10. He taught Latin for a year at Loyola University in Los Angeles, and had a catharsis then that would change his life — and those of many others.

At the reunion, he told a story about a third-grade teacher at St. Turibius School in downtown Los Angeles, who once called "to ask if I knew of a park near LAX where she could take her students to learn something about airplanes. ... When she finished reading the last essay, she said, 'Not a single one mentioned the airport or the airplanes. All they wrote about was the nice priests and the green grass.' … In their neighborhood there was no grass, so all the kids had to play on was concrete and asphalt."

The following year, he arrived at the high school in downtown Los Angeles, where in 1968 a group of students approached him about advising for a new effort to get students involved in community service. An activity that began as part of the spiritual sodality movement morphed into a full-scale community service program within a couple of years, inspired by the Catholic social justice tradition.

Rude told the story about his scheme to build involvement in the Christian Action Movement by enlisting "the cool kids" to join — blasting rock 'n' roll from his office and approaching the student government officers about becoming what he dubbed "CAM coordinators." Before long, he had talked the editors of the newspaper and yearbook, the heads of the Latin and the drama clubs, and the leaders of the debate team into joining.

They raised funds by selling donated day-old donuts and hosting the annual "CAMathon" bike rally that circled the city. Suddenly, students were clamoring to join groups of volunteers across the city in 11 projects that involved more than half the student body by the time Rude left Loyola in 1978.

He embarked on a new journey as a pastor at Christ the King in San Diego, Dolores Mission in Los Angeles and Blessed Sacrament in Hollywood — just as the AIDS crisis was exploding in urban areas around the world.

Rude enlisted his nephew Steven Rude, a psychologist, and the two launched a Saturday support group for those diagnosed with AIDS, according to a eulogy by the younger Rude that was circulated to Loyola alumni. The two Rudes paid visits at all hours to the homes of AIDS patients in hospice, many at the time of their deaths.

His ministry took him later to Jesuit High School in Sacramento and Santa Clara University in Silicon Valley, and to the Jesuit House in Honolulu. He served in the Fresno Diocese's Pastoral Center from 2005 to 2017 as director of social action and co-editor of the diocesan newspaper, for which he wrote a weekly column.

All the while, his work back at Loyola with his CAM coordinators was evolving into a schoolwide program with a "Senior Service Project" that became a graduation requirement. The program was nationally recognized in a story on the NBC Nightly News March 11, 2010, as a model of formation for young people in the spirit of the Jesuit motto of becoming "men and women for others." 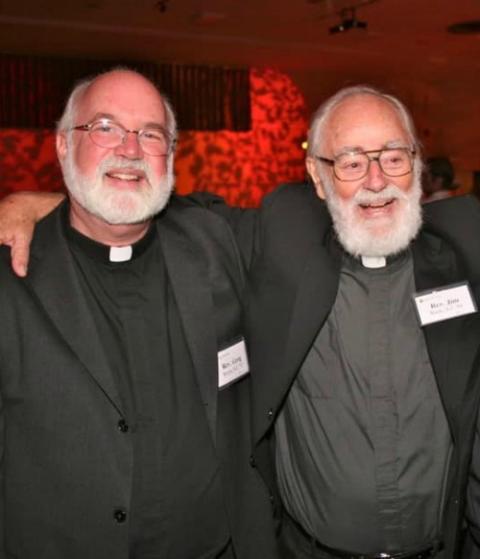 One of the CAM coordinators in 1972 was a student named Greg Boyle, who joined the Jesuits and as a scholastic later directed CAM himself. His vocation led after his ordination to following Rude as pastor at Delores Mission, and ultimately to founding Homeboy Industries — a service ministry that has brought new life to gang-ravaged neighborhoods and has brought Boyle worldwide acclaim.

The Gospel at the reunion Mass in April 2019 told the famous story of Thomas the Apostle, who had his doubts about the resurrection of Jesus. Boyle preached the homily that day, speaking in admiration for Rude and saying of St. Thomas, "Normally, he's the brunt of the 'Oh ye of little faith' message. But Thomas is my hero, because when everyone else was locked in that room — because they were terrified — Thomas was not there ... but outside ... in the streets ... where people of faith are supposed to be. There's the 'fear-based' church — locked in the room — then there is the 'love-based' church: in the streets, trying not to circle the wagons, but rather to widen the circle."

Rude died in his home after a brief illness. He is survived by his brother, Arthur, and nine nephews and nieces. His funeral Mass took place March 21 at the Sacred Heart Jesuit Center in Los Gatos.

[Patrick Whelan, a former NCR board member, is a pediatric specialist at UCLA and is on the Academic Advisory Board of the Institute for Advanced Catholic Studies at the University of Southern California. He was a CAM coordinator during Rude's last year at Loyola High School.]