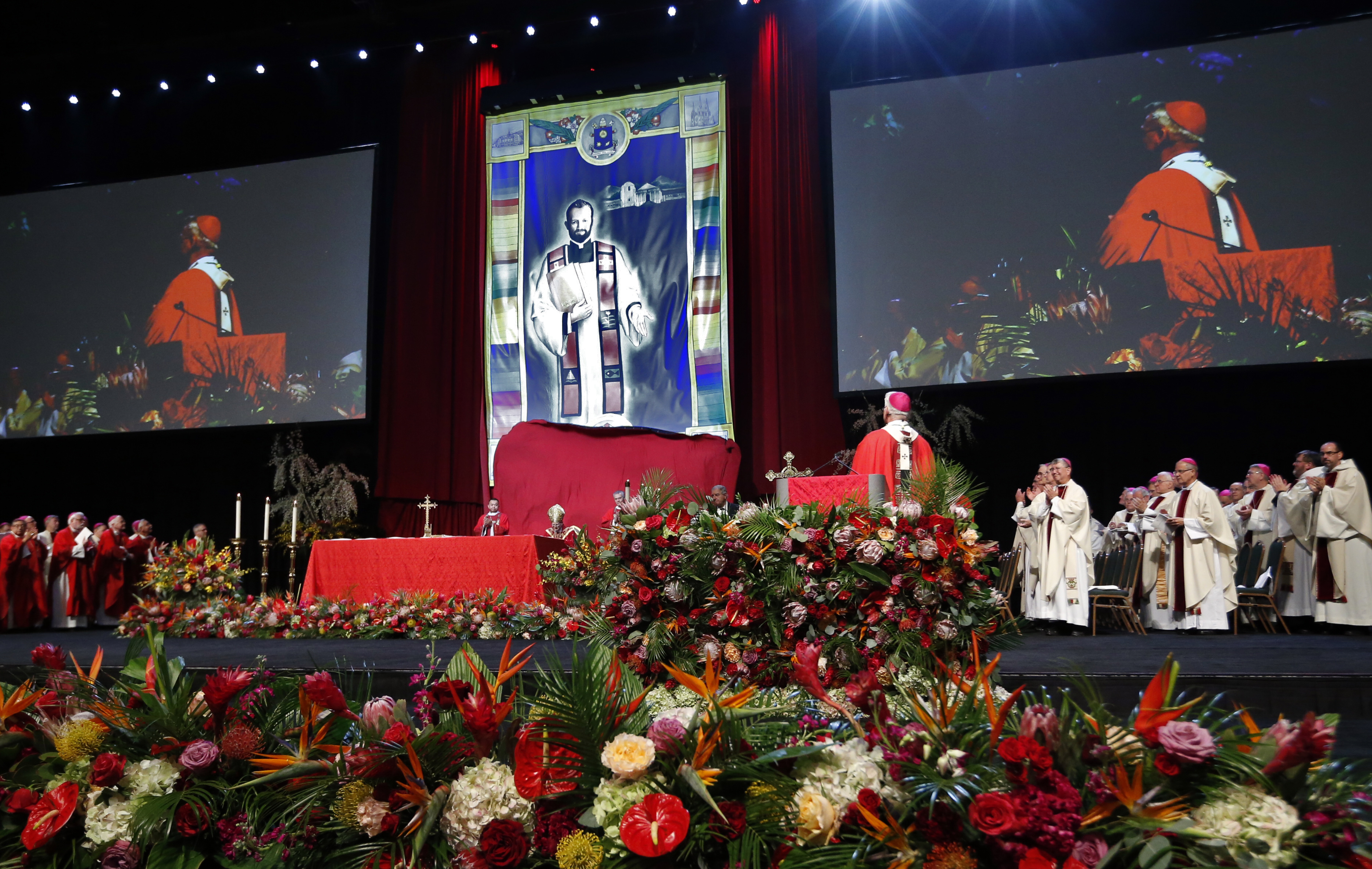 About 20,000 gathered Sept. 23 for the beatification of Fr. Stanley Francis Rother, a native of nearby Okarche, Oklahoma, who had been martyred in 1981 while serving in Guatemala. The unanticipated crowd well exceeded the 14,353-seat capacity of the Cox Convention Center and several thousand had to be turned away. Many more were able to watch via live video stream on EWTN, including residents of Santiago Atitlán in Guatemala, where Rother had served from 1968 until his murder on July 28, 1981.

The Mass was celebrated by Cardinal Angelo Amato, prefect of the Congregation for the Causes of Saints and Archbishop Paul Coakley of Oklahoma City. More than 50 bishops and cardinals, from Italy, South Africa and Guatemala, as well as more than a dozen U.S. states, participated. The Mass included sections read in English, Spanish, Vietnamese, Filipino, Korean, Comanche, and Tzutujil. The event began with a premiere screening of a new documentary film on the life of Rother, commissioned by the diocese. 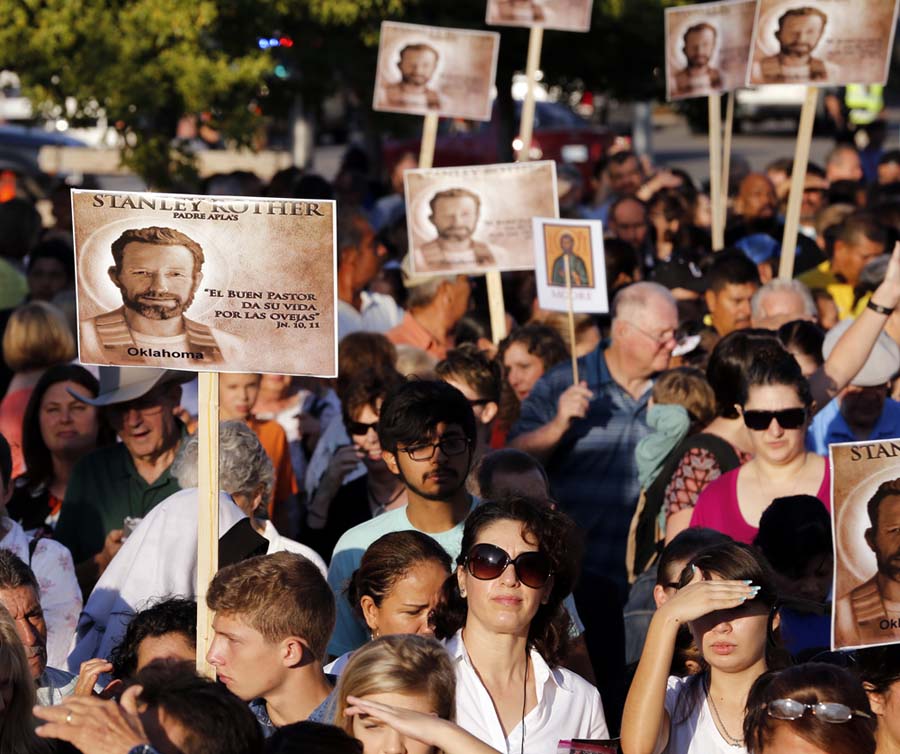 People hold placards with an image of Blessed Stanley Rother ahead of his Sept. 23 beatification Mass outside Oklahoma City's Cox Convention Center. Blessed Rother, a priest of the Oklahoma City Archdiocese, was murdered in 1981 in the Guatemalan village where he ministered. (CNS/Steve Sisney, Archdiocese of Oklahoma City)

Rother is the first recognized martyr in the United States, and the first U.S.-born priest to be beatified. After a ten-year cause, promoted by Archbishop Emeritus Eusebius Beltran, beginning Oct. 5, 2007, Rother was pronounced "Blessed" in an apostolic letter from Pope Francis delivered by Amato. In his homily, Amato declared, "the murder of Father Rother was a real and true martyrdom in odium fidei (in hatred of the faith)." 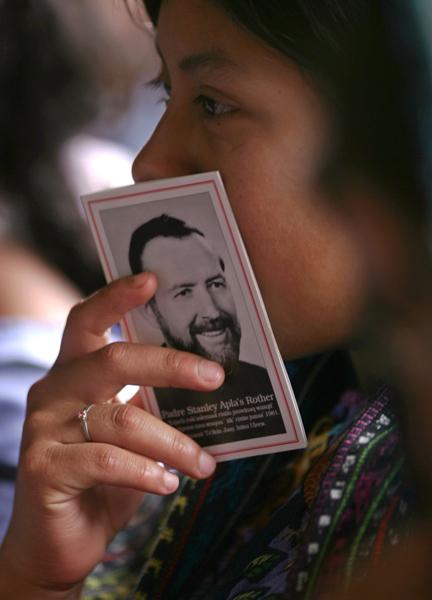 A woman holds a booklet with a picture of Father Stanley Rother, a priest of the Oklahoma City Archdiocese, during Mass in 2006 at a church in Santiago Atitlan, Guatemala. (CNS/Daniel LeClair, Reuters)

Speaking to reporters in advance of the event, Coakley said that he felt this event was a "historic event, the significance of which goes well beyond Oklahoma, this is an equally important day in Guatemala, he is a proto-martyr, the first martyr of Guatemala as well as the United States, so it is a very significant day for the church and for our community." Coakley explained that while he had not known Rother personally, as a seminarian at Mount St. Mary's University in Emmitsburg, Maryland, Rother's alma mater, he had learned of his death, and was profoundly moved by "his example, his courage, his witness." "He has always been an inspiration to me," Coakley continued.

Everyone speaking of Rother's life, talked of him as an ordinary man from a farming family. His younger brother Tom still lives on that farm today. Rother's younger sister, Sr. Marita Rother, now 81, a Catholic nun from Wichita, Kansas, when asked how her brother would have felt at the huge turnout, laughed and said he would have said "What's all this about? Come on people, calm down."

Related: Kansas nun shares memories of her brother who is on path to sainthood

Rother felt called to the priesthood at an early age, but difficulties with Latin caused him to initially be asked to leave the seminary. But he persevered, and after transferring to Mount St, Mary's, he was ordained in May 1963. For one of the commemorative cards at his ordination, he chose the words of St. Augustine: "For my benefit I am a Christian, for the benefit of others I am a priest."

In June of 1968, he joined the Oklahoma mission in Guatemala and was assigned to a local church in the diocese of Sololá. In the parish of Santiago Atitlán, he was called Padre Aplas (the Tzutujil word for "Francis"). He learned both Spanish and Tzutujil, one of the 21 Mayan languages spoken in Guatemala. Eventually he was able to conduct Mass in Tzutujil, and even produce a translation of the New Testament into the local language.

His work as a parish priest involved much physical labor as well, he helped with agricultural projects (using his Oklahoma farming skills), including the creation of a farmer's cooperative, and later a weaver's cooperative, and a credit union. He also helped with the building of a school, a hospital in nearby Panabaj, and the region's first Catholic radio station.

In his homily, Amato recounted: "From 1971 until 1981, numerous killings of journalists, farmers, catechists, and priests, all falsely accused of communism, took place in Guatemala. This was a real and true time of bloody persecution for the church."

"In this situation," Amato continued, "Father Rother, aware of the imminent danger to his life, prepared himself for martyrdom, asking the Lord for the strength to face it without fear. He continued, however, to preach the Gospel of love and nonviolence." 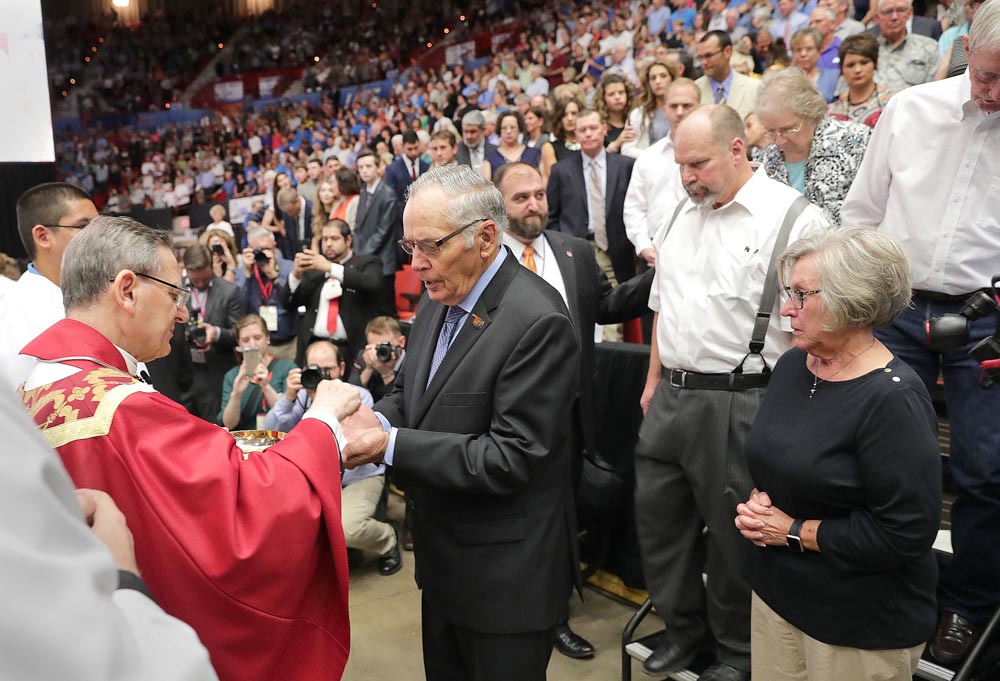 Cardinal Angelo Amato, prefect of the Congregation for Saints' Causes, distributes Communion during the beatification Mass for Father Stanley Rother Sept. 23 at Oklahoma City's Cox Convention Center. Blessed Rother, a priest of the Oklahoma City Archdiocese, was murdered in 1981 in the Guatemalan village where he ministered. (CNS/Dave Crenshaw, Eastern Oklahoma Catholic)

In a December 1980 letter to the Archdiocese of Oklahoma City, Rother wrote: "This is one of the reasons I have for staying in the face of physical harm. The shepherd cannot run at the first sign of danger." That phrase became a symbol of Rother, and is the basis of the title of a biography by María Ruiz Scaperlanda, The Shepherd Who Didn't Run: Father Stanley Rother, Martyr from Oklahoma.

Rother was killed at the age of 46, shortly after 1 a.m. on July 28, 1981, in the rectory of his church at Santiago Atitlán by three masked men who have never been identified. Sister Marita Rother said she is unaware of any efforts to try and bring these men to justice, but Jesuit Fr. Gonzalo de Villa y Vásquez, bishop of Sololá-Chimaltenango in Guatemala said, "it is very important because Stanley Rother is the first one among many other martyrs that we have in Guatemala. So, he is the first, leading a flock."

Terry Werner, who travelled from Nebraska for the ceremony, learned of Rother's death in 1982 and was inspired by his work for social justice. Werner later found out that his father, also a priest, was Stanley Rother's cousin. "It's an honor to be in his family," Werner said. "We all know the travesties of Guatemala, and the shameful history of the [role played in that by the] United States." He went on to say "I would be happy if everyone in this auditorium would recognize that." 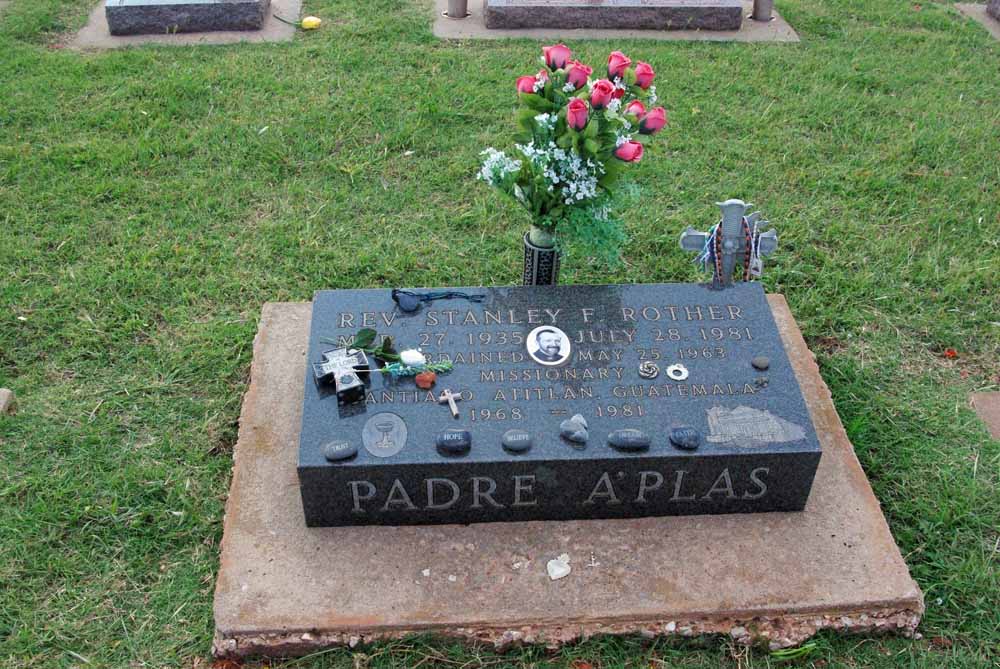 Dolores Mendoza Cervantes made the trip from her home in California to witness the beatification. Her father Juan Mendoza Lacán worked with Rother and helped translate the New Testament into Tzutujil. She remembers, as a 15-year-old girl, collecting her father's last paycheck, shortly before he was murdered. "He always brought positive things to our community," she said of Rother. As a teenager, she fled Guatemala for her safety and now works as a nurse. She hopes this recognition of Rother will also bring recognition to people like her father who were victims of Guatemala's repression.

Elmy Barbara Reanda Pablo read from the book of James as a part of the Mass. She is a resident of Santiago Atitlán, and travelled as a translator with a group of 15 others from the community to Oklahoma City for the event. "For us apart from being happy we are also a little bit sad to remember him being killed," she said. "On Thursday we travelled to Okarche and many of us felt like crying when the priest there said 'we gave you an ordinary priest but you gave us a saint.' "

Another Mass for family and friends was held in the Rother's hometown at Holy Trinity Church in Okarche on Saturday evening. The next step in Stanley Rother's progress toward sainthood will be the documentation of a miracle by the Congregation for the Causes of Saints.

When Rother was killed, his body was returned to his family for burial in Okarche, Oklahoma, but at the request of the local community, his heart and blood were entombed in the church at Santiago Atitlán. Bishop Gonzalo de Villa told reporters that a few months ago, the metal box containing Rother's heart and blood was opened for examination, and "the blood was still fresh — after 36 years. It was as if it had been buried the day before."

[Norman Stockwell is publisher of The Progressive and lives in Madison, Wisconsin.]

A version of this story appeared in the Oct 6-19, 2017 print issue under the headline: Rother, first US martyr, beatified.