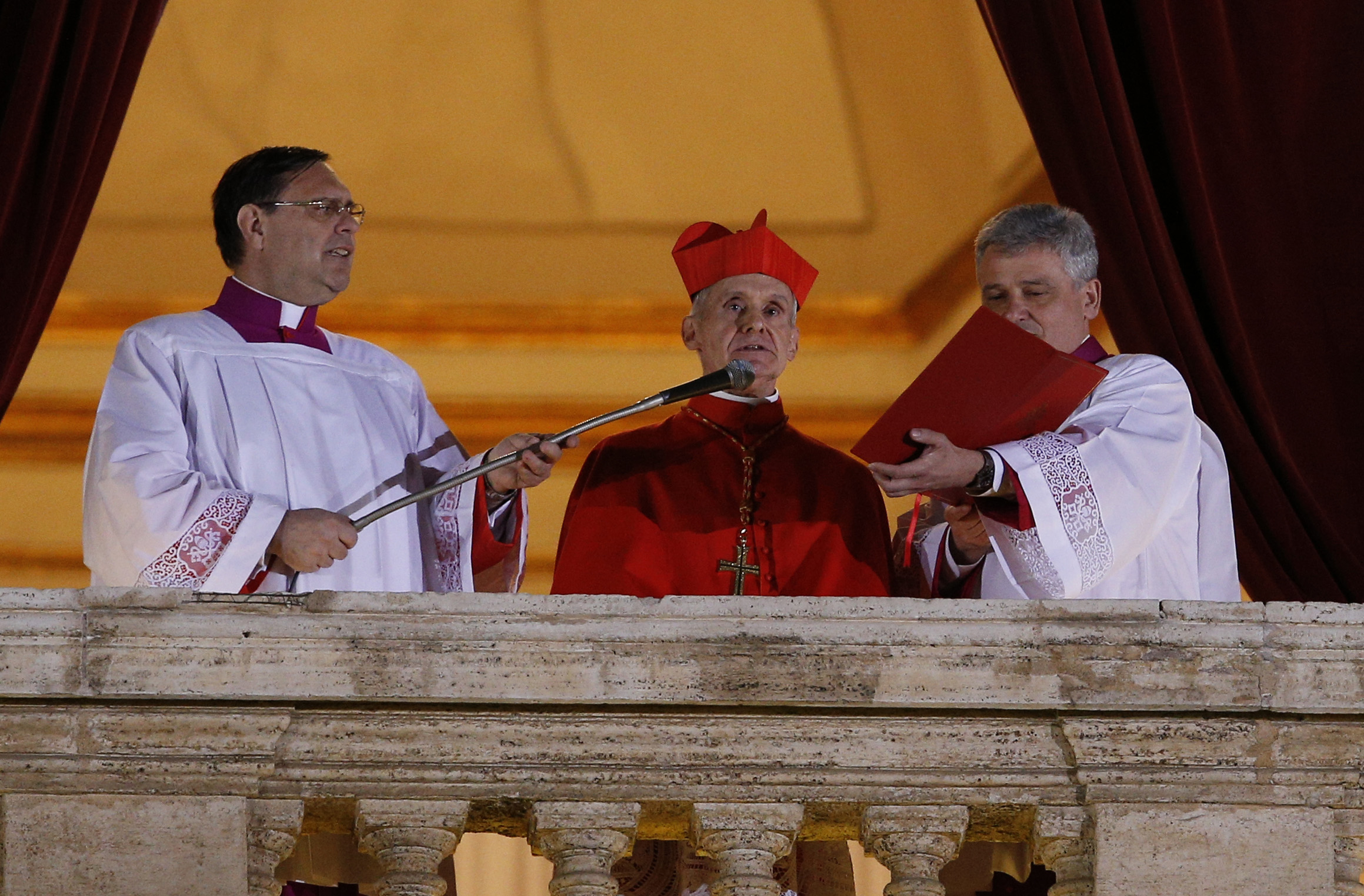 French Cardinal Jean-Louis Tauran announces "Habemus papam!" (We have a pope!) from the central balcony of St. Peter's Basilica in 2013 at the Vatican. Tauran, 75, died July 5 in the United States. (CNS/Paul Haring)

French Cardinal Jean-Louis Tauran, an experienced diplomat and head of the Pontifical Council for Interreligious Dialogue, died at the age of 75 in Hartford, Connecticut, where he was receiving medical treatment.

The cardinal, who had been living with Parkinson's disease, led a Vatican delegation to Saudi Arabia in April.

But it was his role as "proto-deacon" or top-ranking cardinal deacon in 2013, that put him more squarely in the spotlight, appearing at the basilica balcony to announce to the world, "Habemus papam," "We have a pope."

In a telegram to the cardinal's sister, Pope Francis extended his condolences and praised the cardinal's "sense of service and his love for the church."

Tauran left a deep and lasting mark on the church, the pope said, noting the great trust and esteem in which he was held, particularly by Muslims.

"I have fond memories of this man of profound faith who courageously served the church of Christ to the end, despite the weight of disease," he wrote.

Born in Bordeaux, France, April 5, 1943, the cardinal was ordained to the priesthood in 1969 and entered the Vatican's diplomatic service in 1975. He worked in apostolic nunciatures in the Dominican Republic and Lebanon from 1975 to 1983. He was a representative to the Conference on Security and Cooperation in Europe from 1983 to 1988, pressing the Vatican's position on human rights at a time when the Soviet-bloc regimes of Eastern Europe were weakening.

He was called to work in the Secretariat of State, first named undersecretary for relations with states in 1988, then secretary of the department in 1990. For the next 13 years, he was St. John Paul II's "foreign minister," the official who dealt with all aspects of the Vatican's foreign policy.

Most of his work has been behind the scenes, with daily unpublicized meetings with diplomats accredited to the Holy See and with visiting dignitaries. But sometimes he was called upon to express Vatican positions more openly -- on war and peace, on the Holy Land or on the rights of minority Catholic communities.

John Paul ordained him an archbishop in January 1991 and elevated him to the College of Cardinals in 2003, soon after making him head of the Vatican Library and the Vatican Secret Archives.

In 2007, Pope Benedict XVI then named him president of Pontifical Council for Interreligious Dialogue, the office overseeing the Vatican's dialogue efforts with representatives of other faiths, including Islam. The pope had placed the interreligious council under the wing of the Pontifical Council for Culture in 2006 but, with Tauran's appointment, he returned the office to its previous autonomy and high profile.

Addressing a conference on Muslim-Christian dialogue in Qatar in 2004, Tauran told participants that political leaders have nothing to fear from true religious believers.

"Believers who are recognized and respected for who they are will be more inclined to work together for a society of which they are full members," he said.

He once told diplomats that the reason then-Pope John Paul made so many pronouncements against world conflicts and wars was not in an attempt to get involved in politics, "but to show men and women the correct path, to revive their consciences, to highlight rights and the commitments made to them, and to repeat with new words the Gospel beatitude: 'Blessed are the peacemakers.'"

His death leaves the College of Cardinals with 225 members, 124 of whom are under 80 and therefore eligible to vote in a conclave.