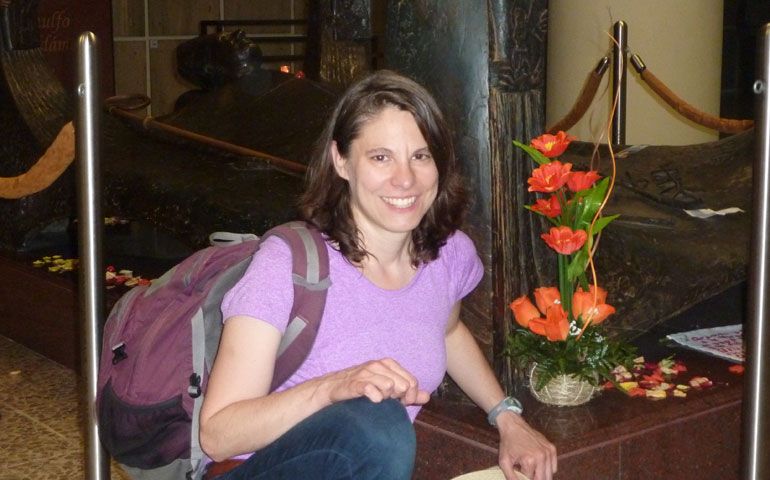 Joyful Salvadorans greeted us as we wandered through the crowd of an estimated 250,000 people gathered for Archbishop Oscar Romero's beatification on May 23, 2015. The richness of the Mass -- and the Salvadoran sun -- nearly overwhelmed the pilgrimage group from my parish.

But for me, the real grace was finally being able to reconnect with Romero's presence after a traumatic accident had washed away my connection to him for a decade. Reflecting back almost a year later, I see how Romero's beatification, and my parish's invitation to celebrate here in the U.S. and in El Salvador, healed my fledgling spirit. I think it was a blessed conspiracy.

Romero's prophetic teachings first inspired me when I was a youthful high school theology teacher. Year after year, I showed my students the movie "Romero," which depicts the archbishop opening his heart to a suffering people. His shy reluctance transformed into a powerful voice that challenged the forces of sin and oppression.

As my longing to experience Romero's Salvadoran homeland grew, my students' teenage stubbornness rubbed off on me. Even though I could not fly with my chronic ear condition, I realized I could still travel to El Salvador. In 2003, I traversed land and sea on a grand summer adventure.

The Romero sites filled me with awe. His vestments, bloodstained from the assassin's bullet on March 24, 1980, appeared both horrifying and beautiful. His martyr's witness granted me deeper access to the mystery of death and new life.

Romero had lived in a country not so distant from mine, and I felt blessed to have been born before he died. Now I had met his beloved people. That Salvadoran pilgrimage remains the greatest experience of my life.

Healed of my ear problem, I flew to Central America in 2005 on a graduate study grant. I planned to conduct an interview project on Romero's legacy. To prepare for the interviews, I bolstered my Spanish language skills with classes in Costa Rica.

During study breaks, I hiked and rafted through the jungle. On a rafting trip the day before departing for El Salvador, my raft hit a rock, flipped and left two of us pinned underwater. I could see safety a few feet away, but the current prevented me from getting there. Our guide managed to free us. Physically, I only had a few scratches. But the accident began to figuratively wash important people and things from my life.

I forged ahead with my research in El Salvador, yet my sense of self began slipping away. Dreams about dangerous waters became waking sensations of anxiety and helplessness. I looked to Romero, revisited his holy sites, but only found emptiness.

I came to understand the literal meaning behind the idiom that something can scare the life out of you. The accident had robbed me of my physical breath for moments and my spiritual grounding for years.

Over time, I learned that after trauma, a person can lose connection with people and places surrounding the event, even when they have no direct connection to the trauma itself. I lost my confidence.

Healing took years. Counseling, spiritual direction, and meditation helped. Trying to remain helpful to others, I worked for a Catholic community that serves the homeless. My memories of Romero lingered like those of a broken friendship.

In 2009, I finished my graduate degree and returned to Washington, D.C., to again teach high school. After a few years, some of my ongoing physical struggles worsened -- migraines, progressive fatigue, and pain. Eventually, I was diagnosed with Lyme disease.

During the intense treatments, I had a respite from work, but in 2013, I became a teacher's aide at my parish's elementary school. I still struggle, and have not been able to fully return to my career, but am grateful for the doctors, treatments and medical insurance so many others lack.

Last year, the paschal mystery of dying and rising that so characterized Romero's faith, preaching, and his own life and death infused its power into my life as Romero's beatification unfolded at my parish. I heard the news of the upcoming beatification on my birthday, March 12, also the anniversary of the murder of Romero's friend, Jesuit Fr. Rutilio Grande.

Three days later, Capuchin Fr. Moises Villalta, pastor of the Shrine of the Sacred Heart in Washington, D.C., announced a mission trip to attend the beatification Mass in El Salvador. When he invited me to join the pilgrimage, I agreed to consider it but figured I would decline due to concerns about the trip's possible effects on my health.

Then the parish council president asked me to present at the parish's annual Romero celebration. For the past 10 years, I had preferred to keep my extensive knowledge of Romero's life hidden, as evoking it raised my anxieties about the accident. Something changed with the beatification on the horizon. As invitations to celebrate came my way, sparks of life I thought long dead rekindled.

I reconsidered going on the pilgrimage. I talked to my doctor and mused over what to pack. But after a day of serious fatigue, I retreated back into safety, and told my pastor I needed to decline the trip over health concerns.

He looked at me and said, "Just say yes, and we will take care of you."

While I was trying to think prudently, Fr. Moises was thinking faithfully. He sensed the Spirit moving and wanted to help me grow with it.

After Fr. Moises and a few trusted friends persuaded me to make the trip, my world expanded. My Romero presentation generated three more speaking engagements. I also helped plan Romero events for my school and fundraisers for the parish's Salvadoran mission sites. Exhaustion and renewal came hand in hand.

While in San Salvador, my body pulled through, thanks to my doctors' advice and extra rest. During Romero's beatification Mass, a circular rainbow opened in the sky. Calling it "Romero's halo," our group experienced this as a powerful sign of God's presence.

Romero's beatification has helped me discover a new place of joy. While illness and pain can isolate me, the trip and sharing my knowledge about Romero have bonded me to fellow parishioners and opened new invitations to give of myself. Did the communion of saints mysteriously conspire through the Romero beatification to renew my soul?

Romero is now officially recognized as an extraordinary Christian witness. He was martyred while celebrating Mass, just after preaching that the grain of wheat, before producing fruit, must fall to the earth and die. He gave himself in defense of his suffering people, shedding his own blood on the altar.

[Cinnamon Sarver has theology degrees from Boston College and the University of Notre Dame.]