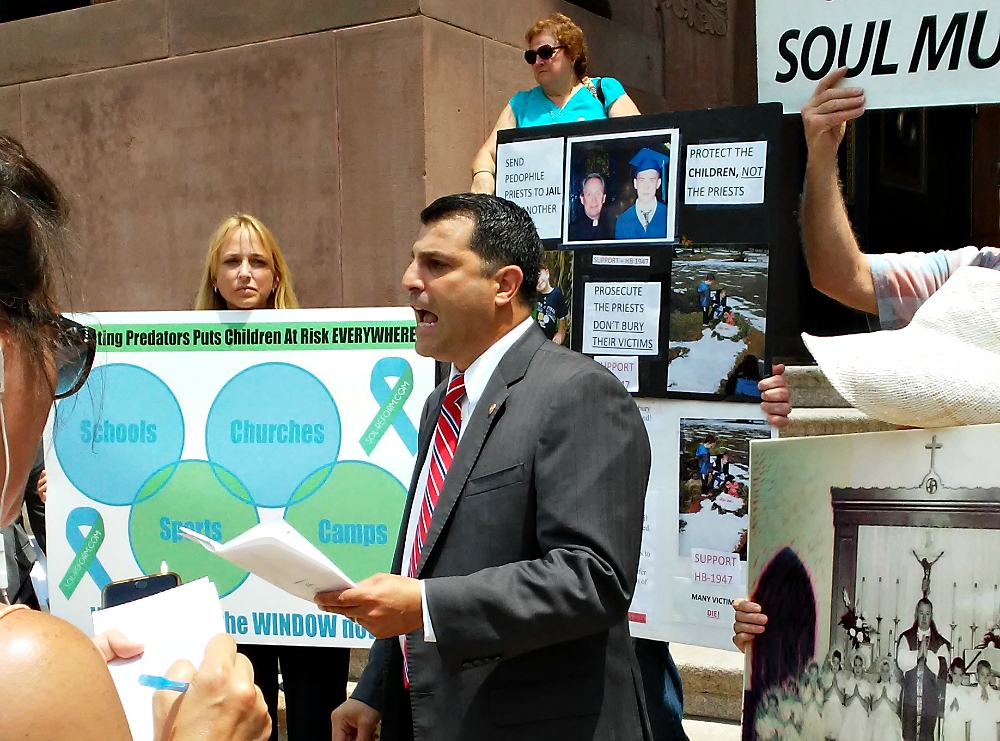 State Rep. Mark Rozzi, alongside sex abuse survivors and victim-rights advocates, holds a press conference outside the Cathedral Basilica of Sts. Peter and Paul in Philadelphia in July 2016 after the defeat of legislation to change Pennsylvania's statute of limitations on sex abuse. (NCR photo/Elizabeth Eisenstadt Evans)

Pennsylvania State Rep. Mark Rozzi often tells people his emotional trauma doesn't get better. The memory of a trusted priest at Holy Guardian Angels in Reading raping him in a shower at age 13 haunts him as strongly today as it did years ago, if not worse.

He's told people about it for years — constituents, media and fellow lawmakers — but the story never felt as powerful and meaningful as it did on a recent occasion when he explained what happened in front of a grand jury in a Pennsylvania courtroom.

"It was very rewarding to get in front of people who were caring and actually listening," he said, "and can make a difference."

Rozzi is one of dozens of witnesses to testify over the last two years as the Pennsylvania Attorney General's Office completes an investigation into six of Pennsylvania's eight dioceses. Later this month, the office is expected to release a report of 800-plus pages detailing widespread sexual abuse and cover-ups. The report is to come a few weeks after an Erie priest was indicted for sexual assault and two years after another presentment for the Altoona-Johnstown Diocese was released.

This grand jury presentment will feature information on the dioceses of Allentown, Erie, Greensburg, Harrisburg, Pittsburgh and Scranton. The six dioceses have already been given copies of the grand jury report ahead of the public, though they and the Attorney General's Office have remained mum on the contents.

Pennsylvania has dealt with major sexual abuse scandals before, not only those involving the Catholic Church. The Jerry Sandusky scandal at Pennsylvania State University led to convictions for assault by the former assistant football coach and for cover-ups by three prominent university officials. And recent accusations have been leveled against the now-resigned director of the Cadets, a renowned drum corps based in Allentown.

With misbehavior and cover-ups from the Catholic Church and others as a backdrop, Rozzi has been trying for six years to get Pennsylvania to eliminate the statute of limitations for civil and criminal cases involving child sexual abuse, facing stiff opposition from Catholic lobbyists.

He noted the breadth of this current investigation into the Catholic Church is far larger than any previous inquiries and warns, based on conversations with nuns and victims, that the result will be severe.

"This will probably be the worst grand jury report in the history of the United States on sexual abuse," Rozzi said.

Hoping 'to get names and assignment histories'

The grand jury for the six dioceses began meeting shortly after the report on the Altoona-Johnstown Diocese was released in the spring of 2016. The Attorney General's Office found hundreds of children had been abused by more than 50 priests and religious leaders in Altoona-Johnstown over a period of several decades. Two Franciscan friars pleaded no contest and were sentenced to five years' probation for covering up crimes detailed in the presentment. A third friar faced charges, but they were dropped because of statute of limitations issues.

Dominican Fr. Thomas Doyle, a canon lawyer who has been involved in seeking justice for abuse victims and who testified twice before the Pennsylvania grand jury, said dioceses in the state have been among the worst at bringing justice for victims.

"It stands out for me because of the brazen arrogance of the Archdiocese of Philadelphia," he said, "because of the arrogance and unbelievable behavior of Bishop [James] Timlin of Scranton."

According to BishopAccountability.org, a website that tracks sexual abuse accusations by clergy, nearly 150 priests in the six dioceses under investigation have already been accused of sexual abuse. Many of the accusations were discovered and self-reported by the dioceses in the early 2000s, under the direction of the U.S. Conference of Catholic Bishops. As Doyle noted, one of the most controversial cases involved Scranton. Timlin, who retired in 2003 and is still being celebrated by the diocese, has been criticized for transferring accused priests rather than alerting authorities.

"We know a fair number of names in Philadelphia and Pittsburgh. Every other diocese is a black box to us to some extent." said Terry McKiernan, proprietor of BishopAccountability.org. "I would hope that we're going to get names and assignment histories."

In May, longtime Erie priest Fr. David Poulson was charged with three felonies related to the sexual abuse of two boys from 2002 to 2010. He allegedly assaulted one of them in a church rectory and then had the boy confess his sins to him. The Office of the Attorney General claimed the diocesan leadership knew of Poulson's tendencies as early as 2010, when the diocese produced a secret memo about his inappropriate conduct with minors, but it did not report him until after the grand jury subpoenaed the diocese in 2016. Poulson remained in active parish ministry until this year.

Former Erie Bishop Donald Trautman noted in the 2010 memo that he had received complaints about Poulson's behavior. Bishop Lawrence Persico, who took over the position in 2012, said in a statement the memo wasn't found until this year, after a victim came forward.

Josh Shapiro, the attorney general, said in a statement he had been encouraged by the diocese's response since the charges. "The diocese has accepted responsibility by acknowledging this abhorrent abuse, expressing sorrow and regret and announcing steps to prevent these horrors from happening again," he said.

With more names and possible charges to come from the new grand jury report, experts are questioning whether the dioceses will respond with acceptance or defiance. In a statement from May 21, Shapiro said all six dioceses had agreed to support the release of the findings. Bishops from Greensburg and Harrisburg, Shapiro said, were originally going to oppose the release.

The six dioceses have been given the report in advance, and Rozzi described the legal maneuvering to get it as "sickening." Doyle isn't as concerned about the early release of the report to the bishops but is skeptical the dioceses will fully accept blame in their responses.

"My advice would be rather than do what is probably the natural reaction, which is to try and cover your tracks and make excuses and find ways to try to justify this, just make a flat admission," he said. " 'Yes, we did this.' I doubt that will happen."

Spokespersons for the six dioceses declined to comment on first impressions of the grand jury report or provide any information on the investigation. 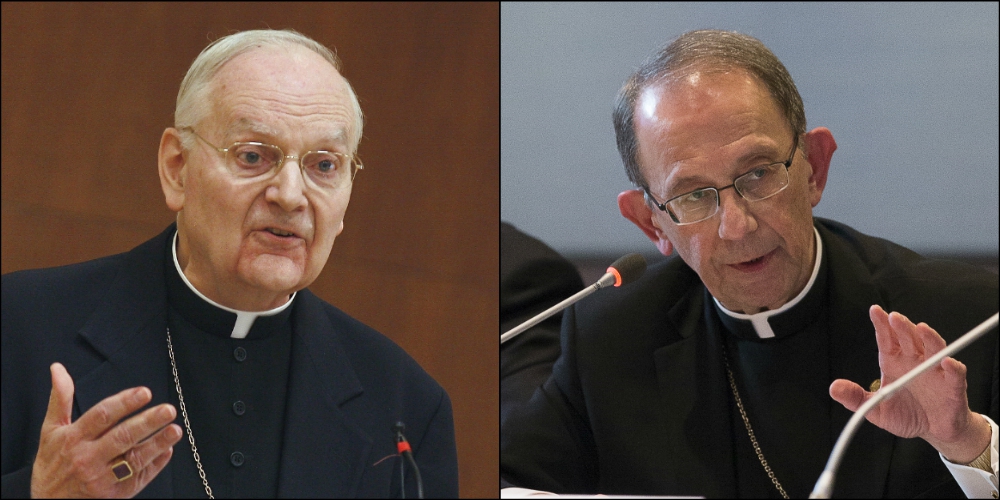 The Erie Diocese has been the most outspoken of the six. In April, before charges were filed against Poulson, it released a list of more than 50 individuals who had been credibly accused of sexual abuse or of failure to prevent abuse. The list does not include Trautman, the former bishop.

"We are committed to assisting victims on the long road to healing and wholeness," Persico said in a statement.

Rozzi sees no satisfactory response besides the resignation of every bishop in the six dioceses or the bishops' providing support for the passage of legislation eliminating the statute of limitations on sex abuse cases. A measure that would also allow past victims to sue the church passed the state House in 2016 before getting killed in the Senate. The Pennsylvania Catholic Conference unleashed dozens of lobbyists to steer lawmakers, and bishops throughout Pennsylvania were outspoken in condemning the bill.

"To me it's disgusting," Rozzi said. "My word to parishioners is to stop giving the church any of your money. Until they hold themselves responsible for their actions, they don't deserve your money."

Rozzi still considers himself Catholic, though he almost never attends Mass. The last two times he said he attended a Catholic service were for funerals for two of his childhood friends who had committed suicide. They were abused by the same priest who had raped him in the shower.