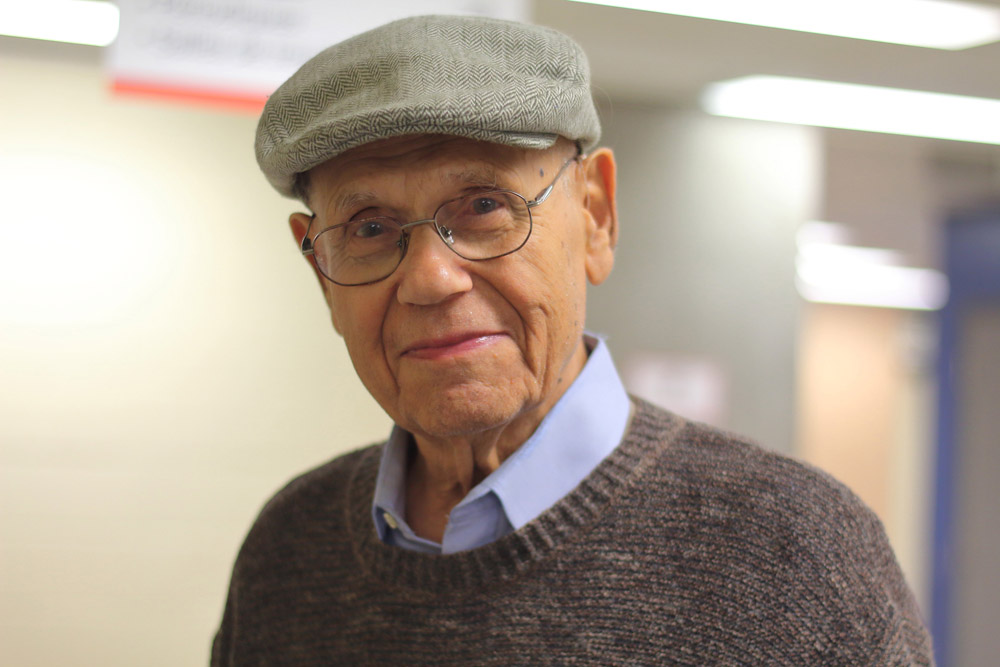 Renowned Canadian theologian Gregory Baum, 94, author of the first draft of the Second Vatican Council's "Nostra Aetate," died Oct. 18 in a Montreal hospital. He is pictured in a 2016 photo. (CNS/Francois Gloutnay, Presence)

Updated 12:36 p.m. on Oct. 23 to include additional comments on Gregory Baum.

Gregory Baum, who as a theological expert at the Second Vatican Council was one of the drafters of the conciliar document Nostra Aetate, the Declaration on the Relation of the Church with Non-Christian Religions, which repudiated anti-Semitism, died Oct. 18 in Montreal at the age of 94. He also contributed to Unitatis Redintegratio, the Decree on Ecumenism, which launched the ecumenical movement after Vatican II.

He was one of few remaining periti (theological experts) from Vatican II and is remembered as one of the most influential — and sometimes controversial — theologians in North America from that era.

"Gregory Baum was a giant and one of the major forces at Vatican II."
— Immaculate Heart of Mary Sr. Mary Ann Hinsdale

"Gregory Baum was a giant and one of the major forces at Vatican II," said Immaculate Heart of Mary Sr. Mary Ann Hinsdale, associate professor of theology at Boston College. Baum directed her dissertation at St. Michael's College at the University of Toronto in the 1980s and was the subject of a collection of honorary essays Hinsdale co-edited.

Hinsdale called him "prophetic" and "a wisdom figure."

Born to a Jewish mother and Protestant father in 1923 Berlin, Baum came to Canada to escape the Nazis at the age of 17. His contributions to ecumenism and interreligious dialogue, especially during the council, helped change the church's relationship to Judaism.

"[Pope] John XXIII wanted a document on the Jews because he was profoundly scandalized by the anti-Jewish rhetoric in the Christian tradition," Baum said in an interview in 2011 with Michael W. Higgins in Commonweal. When volunteers were asked to write the first draft, "I came forward after everyone left and said I had some experience in this area."

John Borelli of Georgetown University, who served at the U.S. Conference of Catholic Bishops in ecumenical and interreligious affairs for 16 years, said Baum's contribution to the council was as a "profound ecumenist and an ecclesiologist."

But Baum's progressive views on contraception, celibacy, same-sex marriage and other issues prompted criticism from conservative Catholics, as did his disclosure of his first homosexual experience at the age of 40 in his recently published 2016 autobiography, The Oil Has Not Run Dry.

Basilian Fr. Thomas Rosica, CEO of Salt and Light Catholic Media Foundation in Toronto, was director of the Newman Center of Toronto in 1996 when protesters disrupted a talk by Baum at the university. But Rosica remembered Baum as someone "who made people think."

In a 1999 column in NCR, theologian Rosemary Radford Ruether put Baum in the same category as other Vatican II theologians, such as Frs. Hans Küng, Edward Schillebeeckx and Karl Rahner.

The council was "the most powerful spiritual experience I've had in all my life," Baum said in an interview with Salt and Light television in 2012. Bishops and theologians "were open to new ideas, and people were anxious to make Christianity [and] the Gospel understandable to people today. Great things happened."

"The whole Catholic community was in dialogue with another," he recalled of the council. "Therefore, there was a kind of openness."

Baum attended all four* sessions of the council and, in addition to contributing to Nostra Aetate, consulted on Unitatis Redintegratio and Dignitatis Humanae, the Declaration on Religious Freedom.

He had begun writing about Catholic-Jewish relations after studying theology at the University of Fribourg in Switzerland. Baum's writings caught the attention of Cardinal Augustin Bea of Germany, a key ally of Pope John XIII and the first president of the Vatican Secretariat for Promoting Christian Unity, who invited Baum to help prepare for the council.

Baum's contributions, great and small, represented his effort to articulate the reality of grace in the world, said Mary Jo Leddy, founder of the Romero House for Refugees in Toronto, a student of Baum's and co-editor of the festschrift Faith that Transforms.

"He was a theological explorer seeking out the pathways of grace in in the human condition, in institutions and in a variety of historical contexts," she said. "This was not an abstract exercise for him. He was a pilgrim of grace and walked and talked with gratitude."

Inspired by St. Augustine's Confessions, Baum became a Catholic in 1946, joined the Augustinians in 1947 and was ordained a priest in 1954. Before his theological studies, Baum had earned a bachelor's degree mathematics and physics from McMaster University in Canada 1946 and a master's in mathematics at Ohio State University in 1947.

He taught theology and sociology at St. Michael's College at the University of Toronto until 1995. He also studied sociology at the New School for Social Research in New York and joined the religious studies faculty at McGill University in Montreal.*

Hinsdale praised his interdisciplinary, critical perspective to theology. "He espoused what you might call a 'political theology' that was all about justice," she said.

After his retirement from teaching, Baum joined the Jesuit Centre Justice et Foi (Center of Justice and Faith) in Montreal, where he served as an associate researcher and contributor to its magazine, Relation.

"He was very sensitive to all kinds of injustice," said Élisabeth Garant, director of the center. "He always thought that his life ought to be dedicated to those who were suffering."

During the last 15 years of his life, Baum became interested in Islam and wrote a book on Muslim theologian Tariq Ramadan.

Baum had left the priesthood in 1974 and later married Shirley Flynn, a former Loretto sister who died in 2007. He was also involved in a psychotherapeutic commune called Therafields in Toronto.

He was an advocate of French philosopher and theologian Maurice Blondel, who connected faith to everyday life. "I do not think that people become or stay Christians because of the historical certainty established by scholars in regard to the origin of the Christian message and the foundation of the church," Baum wrote in his book Faith and Doctrine in 1969.

Rather, people become and remain Christians because the gospel of Jesus Christ "explains, purifies and multiplies their depth experiences," Baum wrote.

Baum once described the post-Vatican II years as a "kairos time" full of optimism. "But this period seems to be over," he said at a public talk in 1992 in Washington, D.C., in which he opposed the Gulf War. "I argue we no longer live in this kairos; we live in the wilderness — a time of moaning and sadness yet hope that God has not deserted us."

By 2011, Baum told Commonweal he was worried that Vatican II had been "put in a deep freeze," having written a paper in 2010 titled, "The Forgotten Promises of Vatican II." He had called for a "rethinking of the role of sexuality and the role of sex in the context of marriage" by the church in a talk to New Ways Ministry in 2002.

Baum had been a supporter of Pope John II's social justice teaching, including his concept of "structural sin," but was ambivalent about other aspects of his papacy, including his leadership style, Higgins wrote.

He disagreed with Pope Benedict XVI on many issues but still praised him as "a great theologian with imagination" in the interview with Salt and Light.

Baum was said to have been optimistic about Pope Francis and praised his 2013 apostolic exhortation Evangelii Gaudium.* "The church has to first of all preach the good news, this is at the core," he said. "The other issues, though they may be important, they have to be secondary."

Despite often strident public criticism, Baum did not take the attacks personally. His "authentically sunny generosity" explains why Baum found it difficult to believe people disliked him, according to Higgins.

"He was the most charitable and optimistic person I've ever known," said Hinsdale.

Garant of the Center for Justice and Faith will remember Baum as a humble man, who would get coffee and tea from the cafeteria for his colleagues. "That's the image of Gregory I want to keep: a humble, simple person taking care of personal relations," she said. "He was very present to life."

Said Rosica: "All the years I knew him, Gregory Baum loved the church."

*This article was updated to clarify the number of Vatican II sessions Baum attended and when he studied sociology, and to correct the names of the New School for Social Research and Francis' 2013 apostolic exhortation.