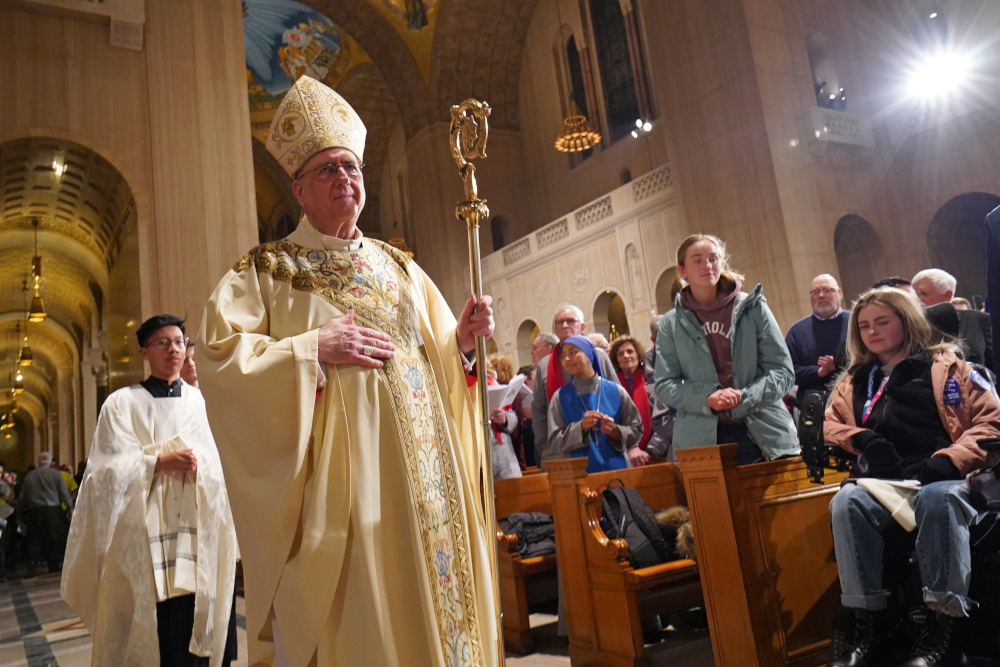 Archbishop Joseph F. Naumann of Kansas City, Kan., chairman of the U.S. bishops' Committee on Pro-Life Activities, processes at the conclusion of the opening Mass of the National Prayer Vigil for Life Jan. 23, 2020, at the Basilica of the National Shrine of the Immaculate Conception in Washington. (CNS/Long Island Catholic/Gregory A. Shemitz)

Two U.S. bishop's committee chairmen said Dec. 17 they "strongly commend" the U.S. Department of Health and Human Services taking "corrective action" against a Vermont medical center and the state of California for allegedly violating federal conscience protection laws when it comes to abortion.

In the first case, HHS's Office for Civil Rights said Dec. 16 it has referred the University of Vermont Medical Center to the Department of Justice for a lawsuit over allegedly forcing a nurse to assist in an abortion procedure in violation of the nurse's conscience rights.

The same day, the HHS office also announced it will "disallow $200 million in federal Medicaid funds going to California in the upcoming quarter due to the state illegally mandating that all health care plans subject to regulation by the California Department of Managed Health Care cover abortion without exclusion or limitation."

"These bipartisan laws recognize that it is an abhorrent violation of conscience rights to force someone to perform, pay for, or otherwise participate in an abortion against their beliefs," the two prelates said in a joint statement.

"Sadly, violations of these laws have increased in recent years, so we are deeply grateful to OCR (Office for Civil Rights) for taking these strong and just actions to enforce the law," they said.

They added, "Because the right of freedom of conscience does not diminish as administrations change, we hope that today's actions to enforce these crucial federal conscience laws will be sustained until the violators come into compliance."

According to HHS, California has violated the Weldon Amendment, which "protects entities from being forced to provide, pay for, or provide coverage for abortions." Because it "refuses to come into compliance" with the law, the state will lose $200 million in federal funds per quarter," the agency said. 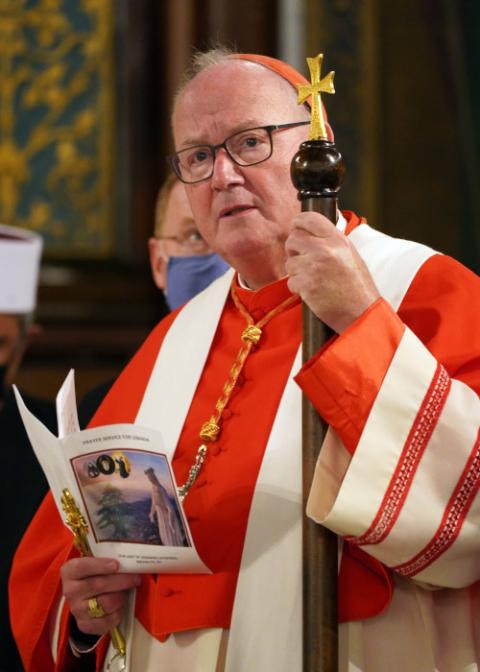 New York Cardinal Timothy M. Dolan, chairman of the U.S. Conference of Catholic Bishops' Committee for Religious Liberty, looks on during an ecumenical prayer service Aug. 25, 2020, at Our Lady of Lebanon Maronite Cathedral in Brooklyn, N.Y. (CNS/Gregory A. Shemitz)

"Entities that receive HHS funds should think twice before flouting federal law and refusing to come into compliance," said Roger Severino, director of the HHS Office for Civil Rights. "Whatever one thinks of the legality of abortion, no one should be punished for declining to pay for or assist in the taking of human life."

The Vermont case involves a nurse who in May 2018 filed a conscience and religious discrimination complaint with the HHS Office for Civil Rights against a medical center in Burlington that receives grant funds from HHS over being allegedly forced to assist in an abortion procedure the nurse was morally opposed to.

HHS said the University of Vermont Medical Center violated what are collectively known as the "Church Amendments," enacted in the 1970s to protect the conscience rights of individuals and entities that object to performing or assisting in the performance of abortion or sterilization procedures if doing so would be contrary to the provider’s religious beliefs or moral convictions.

After investigating the case, HHS asked the medical center Aug. 28, 2019, to conform to the Church Amendments and take other corrective action to its policies, but the center "has refused to voluntarily comply with federal law and its contractual obligations as a federal grant recipient."

The hospital receives HHS funds, so the matter has now been referred to the Department of Justice.

Dr. Stephen Leffler, who is president of the medical center, issued a statement ahead of the HHS announcement Dec. 16 saying that "OCR's latest threats are not just baseless from a legal standpoint, they're an attack on reproductive care and we will do everything we can to protect our patients' access to the services they need."

The hospital's "already-compliant provider opt-out policies and practices" have been strengthened, he said.

"I ask the University of Vermont Medical Center to please respect the conscience rights of all health care personnel," he said at the time.

"When the medical center reversed its long-standing policy banning elective abortions two years ago, Catholic medical professionals contacted me, concerned that they would be forced to participate in abortions, which is contrary to our faith," the bishop said.

"I spoke with a high-level official at the hospital who assured me that religious and moral conscience-objections would be respected," he added.

However, he noted, the HHS findings revealed the nurse who filed the complaint "had expressed an objection for many years and was included in a list of objectors, yet the medical center knowingly scheduled the nurse to assist with an elective abortion procedure."

"Other health care personnel at the hospital have said that they too were scheduled to assist in elective abortions despite their religious or moral objections," Coyne said.